Modern working women in India are finding support from their partners when moving abroad. A feature on men who support women's careers. 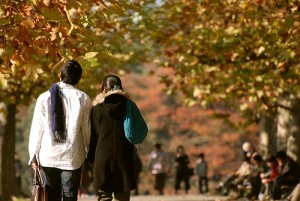 Modern working women in India are finding support from their partners when moving abroad. A feature on men who support women’s careers.

Think about a traditional wedding scene from a Bollywood movie – a sobbing bride leaves her parental home to move in with her new husband at his home.

Virilocality is the traditionally accepted practice in India. The bride joins her groom,usually at his father’s home. Couples may also choose to stay in a separate house of their own. But even in such cases, the traditional practice is for the wife to follow the husband. Or is it?

There is a slow but sure change in how young, married couples of today are choosing to settle down. A young husband may now happily relocate for the sake of his wife’s career, pooh-poohing traditional diktats. But in a patriarchal society where gender-based roles are still deeply entrenched, such open-minded and progressive decisions remain unusual and strange.

Dhruv* and Vanita* are a young, recently married couple. She has a medical degree and he was a Program Manager at Yahoo! When Vanita had to leave for Boston to pursue her Master’s degree, Dhruv left his well-paying, stable job at Yahoo! and enrolled into an MBA program at Boston.

“With the decision to move where my wife was, I was able fulfil my dream to enrol in an MBA program. It also gave us an opportunity to be in a different country, to experience and explore a different culture,” says Dhruv. He does not think that he did something radically different from the prevailing norms of India.

I don’t feel that I have done something extraordinary, but society definitely raises eyebrows…

Arshad Kataria*, a dentist with an established practice in India who relocated to the UAE to support his wife’s career, acknowledges the Indian mindset. “Nothing in our tradition says that a husband cannot support his wife, but people have made their own rules because of their own limitations. I don’t feel that I have done something extraordinary, but society definitely raises eyebrows,” admits Arshad.

Moving abroad: What drives the decision?

Whether it is the wife who moves to be with the husband or vice versa, there are several important considerations that affect the feasibility of the move.

For a young couple like Dhruv and Vanita, being together, pursuing higher studies, and exploring a new culture could be the most important considerations. “My husband is someone who will always make logical and practical decisions. He understood that my career would not be the same in India. He also knew that coming to the US would not be a harmful move for his career either,” says Vanita.

Arshad’s decision was driven by his wife’s long-time dream for all of them to settle in the UAE. “The lifestyle and standard of living is much better there which will be beneficial to my son who is quite young now,” adds Arshad. Anjali* and Arshad decided to relocate because of the promise of better career opportunities and an improved lifestyle.

Indian society is still orthodox when it comes to gender-based role expectations. How did the couples handle the negative reactions when they announced their decision to their families? Were there any positive reactions at all?

Anjali and Arshad had decided not to disclose their plans before the move was finalized. According to them, “If you disclose your plans, people will air their own opinions which might deter you from your aim.” A few trusted people to whom Arshad disclosed his plans were not too happy. “But I am never bothered about others as they only appear when you don’t need them,” adds Arshad pragmatically.

Vanita admits that her own family was doubtful. But there were no negative reactions from Dhruv’s family. “Their only concerns were regarding my career and financial stability. I ensured that I involved my family in the decision making process to make them feel part of the process,” says Dhruv. He was able to convince his family of the positive aspects of this decision. Once the family saw his conviction and realized the obvious advantages, they gave the couple their blessings.

Both couples faced their share of challenges during their move, but they both admit that they wouldn’t hesitate to do it all over again if they had to.

For couples who have the promise of a better life elsewhere, but are buckling under the pressure of subscribing to traditional gender norms, Dhruv suggests that it helps to have a plan ready and to stay focused. “Also, as long as you work as a team and communicate well with people around you, you will be able to alleviate any concerns that they may have,” states Dhruv.

…the most important thing to consider is your spouse and kids and your own dreams.

Arshad suggests that the most important thing to consider is your spouse and kids and your own dreams. “During difficult times, society is not going to help you. A husband and wife are one entity; no one is superior or inferior. Unless and until we change society, it will be difficult for our children to survive and lead a good life.”

Indeed. Change yourself to change the world.

Some of the necessary changes are difficult to make, especially if they go against prevailing norms, but remember that we ourselves are part of the larger group that creates these norms. Make the change confidently in your own life and things will fall into place.

We wish Dhruv and Vanita as well as Arshad and Anjali a fulfilling life in their new homes.

*Names changed on request/first names only, on request.