Letting Your Children Fly: The Blinkers That Parents Need To Remove

Parents who can look at the new generation, without wearing the blinkers of an earlier one, forge a healthier relationship with their children. 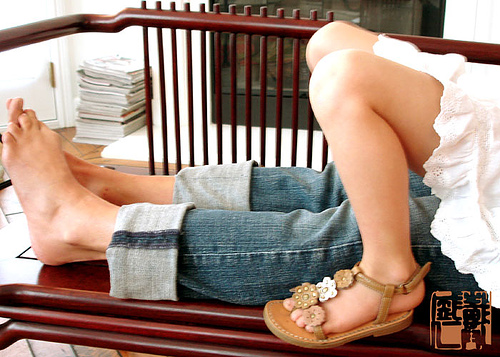 Parents who can look at the new generation, without wearing the blinkers of an earlier one, forge a healthier relationship with their children.

“Goodness! What was her mother thinking when she let the girl go out dressed like this?” was the audible whisper that I heard behind me.

Since I am long past the age when I need a parent’s nod for what I am wearing, I assumed that it was aimed at the young girl walking in front of me. Clad in a mini-skirted one-piece, which was strapless with precariously high stilettos on her feet, she looked lovely. Only moments ago, I had in fact, admired her poise as she swished ahead of me.

As I drew closer, I realised with a pleasant jolt of surprise that this was a girl that I saw regularly on her way to her college. A student of business management, who also worked part-time, I normally saw her in a more circumspect avatar.

It was evening time, however, and she was quite obviously, on her way to a party.

I turned around and sure enough, recognised the source of the catty remark, as well. It was a couple of my ‘neighbours’; women in the habit of passing remarks about everyone. Particularly venomous were the barbs aimed at the female sex, particularly young girls. Girls pursuing a career, actresses wearing bold outfits on screen, women involved in demanding careers, busy working mothers – no one escaped their scrutiny or judgement. There was criticism of the parents of these girls, as “they had lacked in their roles as guides and disciplinarians”.

A case in point was this girl, who was on her way to a party. Although she belonged to a conservative community, she was taking decisions about her life and career that were breaking the mould. Within her own extended family, she surely faced censure and criticism. She surely did not need to be judged by some ‘aunty’, who barely knew her.

The girl turned around as I approached, her smile of recognition dimmed by the glance that she cast at the duo behind me. It made me realise that she had overhead the poisonous comment.

Pausing, I waited till the gossipy neighbours drew abreast of us and loudly, said, “Hey. You are looking great. Wish I could have worn something like this when I was your age.”

It is the absolute truth.

When parents forget that they were young too

Time was, when we were growing up, we were at the mercy of opinions at large. It may seem facetious now, but back then, it was a rare middle-class girl who would dare to wear clothes that attracted comment or attention. Our hair-cuts, our style of walking, even the volume of our laughter had to confirm to certain rigid standards. Many of us had to change our career paths and alter our likings to confirm to societal expectations.

Looking back, I realise that that we and our families had to conform to these norms of society; sort of like the colouring books that children use. Colour within and do not venture out. Do not buck the trend or else….

Looking back, I realise that that we and our families had to conform to these norms of society; sort of like the colouring books that children use. Colour within and do not venture out. Do not buck the trend or else….

Did these ladies who were expressing their opinion so freely, forget that they had been young once? That they had sighed over an unattainable matinee idol, envied a certain girl for her haircut and wished to have a similar one? Maybe they had secretly wanted to dress or wear make-up like the female stars of their generation? Did they remember that they had perhaps been denied a school trip or a career choice by a family elder merely because they were female? Perhaps they had wept secretly when they were compelled to give up their schooling early and enter into matrimony?

Why does each generation of parents forget that the next one is similar and yet different?

Each succeeding generation is fundamentally the same; have the same dreams, aspirations, hesitations and fears. But they are also different in the way they reach out for these dreams and aspirations, and tackle their fears and hesitations.

Women today are getting better education, choosing unconventional careers, have a fabulous sense of fashion, are financially independent and wonderfully ambitious.

Parenting is fraught with so many uncertainties that it is idiotic to deny your children their freedoms. Commenting on a girl as well as her parents on the basis of her dress is so myopically uninformed that it is hilarious.

People who persist in doing so do not know what they are missing, because they are looking at the new generation while still wearing the blinkers of the earlier one.

Parents who overcome this barrier have a healthier relationship with their children.

As for the part of the initial comment that wondered what her mother had been thinking, I am sure that the primary emotion that she felt was pride.