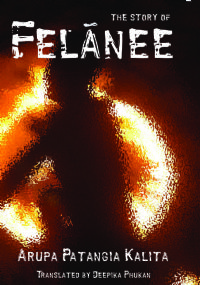 Written originally in Assamese by Arupa Patangia Kalita and translated by Deepika Phukan, Felanee is the story of a woman who lives her life surrounded and affected by violent ethnic conflict.

Felanee is the nickname of the protagonist (no one apart from and since her husband calls her Malati, her given name). The name is telling: it literally means trash (“thrown away”, according to the back cover, but with my admittedly limited Assamese, I’d translate it as “something to be thrown away”).  It’s the moving story of a woman who loses her husband and her home in one round of ethnic conflict, lives her life and brings up her son with the shadow of violence always hanging over her head and, is threatened by loss all over again when the ethnic conflict grows strong again and takes on new forms.

Like Sita’s Ramayana, this is a story of how war affects women. While the men (not all of them, though) are easily roused to jingoism, the women experience only too well the effect of unrest on their lives and livelihoods, and on the lives of their children.

What is jarring though is the translation and poor editing. The writing has a textbook quality to it (example: “The medium of instruction in the high school was Assamese. Most of the children were of Adivasi parentage.”) that detracts from any pleasure in the story, and at times it’s unintentionally obfuscatory. There are also egregious errors; at one point a woman is referred to as a man’s wife and, a couple of paragraphs down, as his mother.

The beginning of the novel is somewhat weird – the first chapter quickly passes through the lives of Felanee’s grandmother and mother, and then discards them as irrelevant to the story. We meet Felanee in Chapter Two, grown-up, married and mother to a seven-year-old, and we’re supposed to know the stories of her mother and her grandmother but have no idea of who she is, what she likes and wants and what moves her. Both these women were affected by violence, so this is probably a metaphor for violence erupting through the generations and claiming innocent victims: but it’s dealt with in such a perfunctory manner that it adds little to the story.

Even the dread and violence that fills the next few chapters is less powerful that it would have been in the hands of a more skilled writer (or translator: it’s hard to say which). Another thing that detracts from the novel is the lack of any exposition for readers who might not be familiar with the ethnic violence, or even the different ethnicities in Assam, and who might find it difficult to guess their ethnicities from their names or the description of their apparel.

If you can look past all these details, this is a beautiful story, both an intimate look at the life of a woman who struggles to make a life for herself and her son, as well as a critical look at violence in a state that has been ravaged by it. But towards the beginning of the novel I was tempted several times to give up, so don’t say I didn’t warn you.

If you’re planning to purchase Arupa Patangia Kalita’s Felanee, do consider buying it through this Women’s Web affiliate link at Flipkart. We get a small share of the proceeds – every little bit will help us continue bringing you the content you like!