Have you ever lost something that seems trivial, and yet so important at that moment? A story of losing and recouping, all in the course of a day. 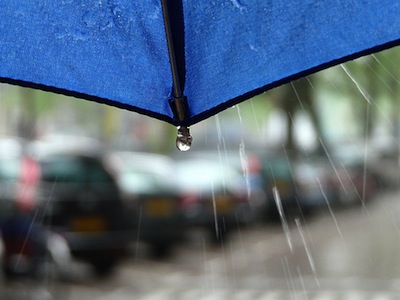 Have you ever lost something that seems trivial, and yet so important at that moment? A story of losing and recouping, all in the course of a day.

Sandhya Renukamba is a book-loving, stay-at-home-mom to an equally book-loving 11 year old. She reads anything and everything, especially children’s books, which she reviews on Saffrontree . She is fascinated by words.

At that time, I was around 16-17 years old, a junior college student. I started from home as usual. Backpack, check. Umbrella, check. It had been pouring since the night, and as I stepped out, I unfurled the umbrella, holding it aloft with a firm grip, clicking my tongue in annoyance at the gust of wind that threatened to pull it out of my hand. It would be a miracle if I could get to the bus stop, a mere 10 minutes’ walk, without getting drenched, I thought.

The bus was packed. I quickly shut my umbrella, and managed to struggle my way in, getting to a seat whose occupant, I knew, got down a couple of stops later. As regular commuters, we had an unspoken arrangement – I would inch my way to her seat by the time it was time for her to get up, and sit on the emptied seat. As soon as I had eased myself into it, I stood my folded umbrella by the window, so that the water could drain away. It was an hour’s journey to college, and I settled down for a nice long read.

Time drifted away, and the sounds and smells around me receded as the travails of Mrs de Winter loomed large in my mind – I was in Manderlay, the terror of confronting Mrs. Danvers blotting out anything else.

A sudden clamour brought me back to the present – I looked up to see that I had come a way further than I should have. “Now I’ll have to walk back two stops,” I muttered to myself, as I rushed to the door, pulling my backpack behind me, the book still in my hand. At least, the rain had stopped. I realized too late, just as the bus pulled away, that I had left my umbrella behind!

Angry with myself, I made my way to the college. Now this was a fine thing to happen – how was I going to explain the loss of a nearly new umbrella to an exasperated parent? The third umbrella this monsoon to have misplaced?

The worry had a crab’s hold on my mind, and I could not focus. I told myself not to be silly. What was done was done. Ruminating over it wasn’t going to get my umbrella back. That, of course, didn’t work, and as I had predicted, the misery fomented in my mind all day, resulting in a humongous headache by end of day. Every month, I had been using my pocket money to buy a new umbrella to replace the one I would lose. That left me with just enough money for tea and eats at the college canteen. How in the world was I going to renew my library subscription? What would I do without my precious books? I didn’t want to borrow from my classmates – again! No way was I going to ask my parents for any extra money – not after I had promised to be more responsible for my things, for the nth time.

Round and round in circles, went my thoughts – all my focus on how to procure the books I wanted…no, needed, like air. A new umbrella was a must. There was no way I was going to survive two more months of the Mumbai monsoons without one. There was no way I was going to focus on the classwork, too – not if the lecturer was going to go on in that soporific manner. I needed to get out of there, clear my head, and think of what I needed to do.

It was early yet, just past lunch time. My stomach gave a loud growl as I dully walked to the bus stop. The hunger worsened my headache, but contrarily, I did not head to the canteen. I kept walking aimlessly, until I realized I was near my usual bus stop. Like a horse cut adrift, I had meandered there, out of sheer habit. “Why not?” I thought. “Let’s just go home.”

The sky seemed heavy, as though with its disappointment in me. Dully, I watched a bus trundle over, and stop. It was not as crowded, it being mid-afternoon. I got on, walked by habit to the seat I usually took, and sat down, still in that haze. I bought my ticket from an indifferent conductor, and gazed out of the window.

Suddenly, the driver braked hard, jolting me out of my daze. A dog had apparently run across the road. As I recovered my wits, I realized that my ankle was hurting. Something had hit it from behind. Annoyed, I looked down to see what it was.

There, rolled out from under the seat where it had rolled in earlier in the day, was my library card – the lost umbrella!