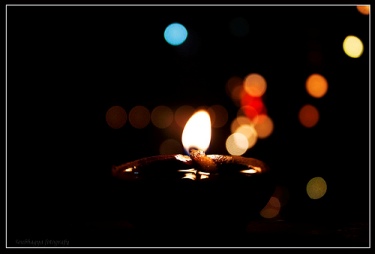 Every ending is a restart. How a grandmother – granddaughter bond gets a new beginning. Amita Kamat shares her story for December’s writing theme, ‘Endings’.

There will be a time when you’ll think, ‘This is the End’. THAT will be the ‘Beginning’!

For me, endings are not about finality, they are about a restart. Enigmatic endings, under the influence of powerful imaginations can give birth to stunning starts. Start of new life, for example! I, for one, wholeheartedly believe in this philosophy. As an over-pampered grand-child, my childhood was blissful! Tempered with healthy doses of discipline, I was brought up by my maternal grandmother amid love and laughter. Under her wings, I grew up a confident young lady ready to take on the world.

However, in the middle of my growing years, I had started drifting away from her. Afternoon siestas on my granny’s lap were replaced with chat sessions with friends, stories that always would reach her aging ears became untold secrets, demands for her hand-cooked bhaajis and rotis were replaced by fast-food outings with pals. I wanted to be a modern girl with modern thoughts, and my Aaji with her age-old ideals seemed like a relic from the past.

“No shorts or minis”, she would object as I readied for a movie evening. “You don’t see the world like it is, you are a tyrant”, I would say vehemently, before strutting out in those very ‘objectionable’ clothes!

“Cut your gossip time, the phone bills are on a steep rise”, she would suggest sensibly. “Oh puhleez, you don’t have friends to catch up with”, I would ridicule her with irritation. “If you like someone, share your feelings with me ok, I will listen to you patiently”, she would sermonise while we slept. “Are you bonkers? What are friends for”, I would secretly think, pretending to have slept off and never heard her.

Slowly the days passed, and I never noticed that she had aged. One rare morning that I woke up before her, I noticed her skin seemed much more wrinkled and her breathing rather laboured. I panicked, thinking that something dire was about to happen to my Aaji. But the next moment, she shook her frail figure off the bed and set out to make our breakfast.

And finally, like it is always destined to happen, the end came, much too suddenly. Undiagnosed angina masked as painful cramps in the neck and back took her away from me. I cried like mad, inconsolable in my loss, unable to look at the still body placed in the very house that was filled with her aura. I could not accept that she wouldn’t be reprimanding me anymore for what I wear, how little I eat, how badly organised I am and all that. The loss was entirely mine. Loss of the best thing in my life! Would I ever cope, I wondered hopelessly.

And then.. it suddenly dawned upon me! It wasn’t an ending. My Aaji seemed to wordlessly convey, “I’ll be back. Back with you, such that we always remain tied with that unbreakable bond. This is just the pass-over from one life to another. I am going to be with you in more ways you can ever imagine!”

Sure enough, 10 years later, as I looked at my new-born, I saw the snowy white skin, dimpled smile and the gleaming eyes that confirmed what only I had believed steadfastly all these years! She was back… as my daughter, an inseparable part of my life, an unfailing bond that would stay forever.

My Aaji, my daughter, the reason behind my happiness! Indeed, it was never an ending…just a reverberating restart.

Amita is a freelance writer and runs a personalized resume creation venture called Copytable. Based

One Bond Ends With Another Beginning