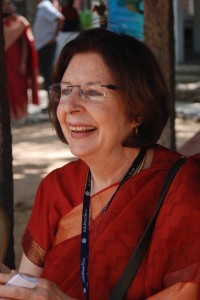 Deborah Thiagarajan started Dakshina Chitra in 1996 in an effort to preserve some incredible specimens of traditional Indian houses. Today it is a well-known heritage centre that acts to preserve and create interest in various facets of Indian culture such as art and architectural heritage, craft, music and dance. It is also among the top places to visit in Chennai with kids.

I spoke to Deborah Thiagarajan on her journey to conserve the best in Indian culture for future generations to enjoy.

Dakshina Chitra began at a time when awareness of the need to preserve Indian culture and heritage was very poor. In the years since, would you say the situation has changed significantly?

Deborah Thiagarajan: There is more awareness, but we still have a lot of trouble getting the government to pass any laws to give protection to heritage structures. 90% of heritage buildings in Madras city for instance, are government owned, and the government does not have a restoration or maintenance plan or budgets for them.

1,58,000 people visited Dakshina Chitra last year, and of these 30,000 were children. It is important to have children know what their identity is. But yes, it is a slow process.

With children being a good number of your visitors, how do you think their interest can be sustained?

Deborah Thiagarajan: We conduct one day as well as more in-depth workshops on various art and crafts. Many women have taken these in-depth workshops and use these skills to run craft activities for children themselves; when kids make things with their own hands, their interest can be sustained. If schools run heritage clubs, when children travel to the countryside and recognize the things they’ve seen in Dakshina Chitra, it helps.

Sustaining interest is not easy. People need more opportunities to engage with heritage whether it is in the form of craft, performing arts or anything else. For example, we have a wonderful performing artist, Kannan Kumar, who has gone to over 100 schools and taught devarattam and silambam. Kids love the music and the rhythm and they would rather do this than PT! A Potter At Work In DakshinaChitra

Parents in India, and especially in South India emphasize maths and science education to the exclusion of everything else. In this context, what can be the role of culture?

Deborah Thiagarajan: The culture industry (and it is an industry today) needs sensitive, well-informed people to run it, but we are so far behind in how we promote and brand culture. A country like Australia is only 200 years old and they market whatever they have, even if it is so little! We have so much but we don’t know how to make it interesting.

We need a vision, not just money. It will take time, but parents will say that this is a good area in which my child can work. Children are also heavily influenced by peer pressure and by parental influence, but there are more viable job opportunities coming up in the cultural sector. You have to look at Indian culture as an asset for this country – in terms of stability through cultural identity, through job opportunities, and in the form of tourism, with Indian, not just foreign tourists.

Is there a danger of Culture becoming a novelty rather than part of everyday life?

Deborah Thiagarajan: In India, you can still find tailors and carpenters, you can still see the garland-makers on the streets, but this is receding. All these skills were part of a time when time did not have a cost to it. When you go down to Mahabalipuram, you can see how creatively the stalls are arranged, but the more sleek you get, the less it becomes part of your everyday life. You become a spectator, not a participant.

If you only want factory made items, you’ve already taken a step away. If we can be modern in the sense of being hygienic, and yet retain our local way of life, culture can stay as part of life. It is possible to do it. The French have done it; they have allowed only a limited number of big stores and still have their local grocers, the boulangerie… it depends on what people want. A Colourful Stall At Dakshinachitra

It’s been a long time now since you came to India, started Dakshina Chitra and got it to where it is today. What about this journey has made you happiest?

Deborah Thiagarajan: When you start something like this, it is like starting to build a brick wall without knowing what the house will look like! My husband used to tell me, “Start small but think big.” What is most satisfying is how many people rallied around me to make this happen.

Sometimes I am astounded at what it has become. It will be the people working with me who will take it forward after me. My staff has taken a lot of initiative and today I know it will continue to function creatively even if I am not there. It is very satisfying to know that we have grown from an individual effort to an institution – that is the biggest challenge for an organization and I am happy we have been able to do that.

*All other images used under the Creative Commons Attribution License.