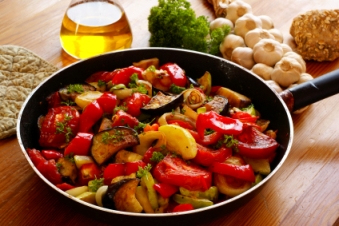 A Brinjal Recipe: From Loathing To Love

Brinjal recipes don’t find takers among many, but here is a ratatouille recipe – which will solve the dilemma of how to make brinjal tasty!

Hands up if you have tried Marmite (or even tried it). Do you like it? Seriously? I hadn’t even heard of the thing till my son started going to nursery and he was fed a Marmite sandwich. Introduced early to this quintessential British spread, he loved it and would happily have it day after day at teatime. As for me, it was all I could do to stop myself from gagging at the yeasty smell of it. It looked more like motor oil to me and I could not see anything remotely attractive about a brown paste spread on a piece of toast. No wonder that Marmite, which divides its tasters into two firm opposing groups, became the adjective for anything or anyone that elicits a strong love or hate feeling in you.

Brinjal was my personal Marmite. Growing up, we ate so much of it at home that I used to hate the purple stuff. It was my dad’s favourite vegetable and graced the table on a weekly basis. I tried to eat as little of it as possible but even that was too much. The slimy texture on my tongue, the near tastelessness unless tossed in my mum’s spice mix and its ubiquitousness were the strikes against the vegetable and I would have been happy, like Dennis the Menace with his carrots, to happily give it away to whoever came asking.

When I set up my own home in England, I cheerfully banned all brinjal recipes from my kitchen. The fact that the British aubergines were half as big as my arm and almost as fat, didn’t help their cause much either.

After not eating it for so long, perversely, I started craving it. Thousands of miles away from my hometown, I longed for my mum’s ‘Ennai kathirikkai’ (translates rather unappetisingly into Oily Brinjal) with the aromatic spice coating. So I asked her for the recipe and scoured the Indian shops for the tiny variety, made it for my family and felt something quite akin to contentment. After loathing it all my childhood, I now loved it! Go figure!

Of course, once I started, there was no stopping me. So I got my mother-in-law’s recipe for the Andhra ‘ennai kathirikkai’ that was my husband’s favourite. Then I bit the bullet and bought home the massive aubergine and tried my hand at making a mess, er, ‘bharta’ of it.

When I once hated it for its lack of strong taste, I now liked it as the very same thing made it versatile. How fickle can one be, eh? Since that day when I moved into the ‘Like Brinjal’ camp, I have made it using brinjal recipes from many cuisines and have loved them all. As is typical of these things, the brinjal graces my table in some shape or form on a regular basis, making my son exclaim, “Not again!”

One of my favourite dishes these days is the French peasant stew of Ratatouille. A sublime combination of onion, tomatoes, aubergines, courgettes (zucchini) and peppers, it is wonderful both eaten on its own as well as served with a jacket potato or pasta. It is a more-ish dish that will keep you going back for more.

The method of preparing it, apparently, is something that no two chefs agree upon. Cook the veg separately or all together now, in one pot? Let it stew slowly in a slow cooker or over the stove-top? I am sure the French have their own way but I have made it following the BBC’s Good Food guide and it has always netted me a lip-smacking dish. This is how it goes.

Cut all the vegetables into bite-sized chunks. Heat a tablespoon of olive oil in a thick-bottomed pan.

Cook the aubergines on medium heat till they soften. Drain them off the oil and keep them aside. Repeat the process with the courgettes and the peppers.

In the oil, brown the garlic. Next, drop in the onion and cook it till it turns translucent.

Add the tin of tomatoes and torn leaves of basil and cook for couple of minutes. Add the sugar and salt, stir well.

Slowly add the vegetables one by one, mix well and cook for 5 minutes. Turn off the stove and serve piping hot, garnished with more fresh basil.

Try it and see if you like it – do mention in the comments if you have your own recipe for ratatouille (or any other favourite dish with brinjal/aubergine).

Or even if you hate brinjals. I do know how you feel. And I am sure my son does too!

Mother, writer, foodie, margarita lover, Lavanya is the exception to the rule that women are

Author’s Corner: With The Bong Mom