A complex story of three generations of a joint family, Namita Devidayal’s Aftertaste shines brighter in its minor characters. 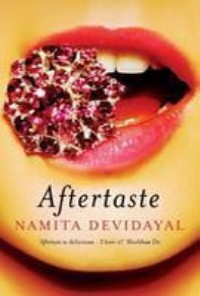 A complex story of three generations of a joint family, Namita Devidayal’s Aftertaste shines brighter in its minor characters.

Namita Devidayal’s Aftertaste is a complex story about a family held together by the family business (and its income) and by a powerful matriarch manipulating the puppet-strings. Yet neither the matriarch nor any character in the novel is treated as a caricature. The author elicits sympathy for the matriarch before she became Mummyji and gained more control of her life (and paradoxically, grabbed power over other lives around her, just as hers had been controlled), and respect for her formidable business skills and courage in the face of disaster. The flaws of each character are displayed starkly, but with sympathy for the circumstances that move them.

Aftertaste also works well in showing the differences and similarities among generations: the rigid, cloistered world Mummyji grew up in and her relatively indulgent but definitely sexist upbringing of her children contrasts heavily with the confidence and ease with which her granddaughter, Smriti, moves through her life. It exposes how the rigid social mores hurt both daughters and sons by trying to pin them into pigeonholes. Everyone in the book, from Mummyji’s husband Daddyji to her grandson Rahul struggles sometimes to fit into, and at other times to break out of, roles they are expected to play.

Where Aftertaste falters is in its clichéd and sometimes ungrammatical writing. Sample this: “It took him a mini-second to register that it wasn’t some awful apparition, but, rather, his loving wife.” (Overgenerous use of commas aside, what is a mini-second?)

“She didn’t know it just then, but this was going to be the first day of the rest of her life.” (Unlike every other day?)

I can’t help but feel that this would have been a much more enjoyable novel if it had been better edited. There’s also this breathless quality to the writing, as though the author is leading up to this magnificent dénouement, which, when it finally occurs, is a bit disappointing.

The parts I enjoyed best were the little portraits of secondary characters (who seem to have no importance to the actual plotline but add tremendously to the scenery) like Babu, the milkman Mummyji’s devoted servant Rajni is friends with, and Lolita, the mistress of one of Mummyji’s sons. It’s when the novel devotes a lot of space to lovingly explore one of the more prominent characters that the fabric seems stretched too tight and frays at the edges. (And that’s one consequence of reading a novel like this: it makes me resort to trite metaphors to explain it.)

If you’re planning to purchase Aftertaste by Namita Devidayal, do consider buying it through this Women’s Web affiliate link at Flipkart. We get a small share of the proceeds – every little bit will help us continue bringing you the content you like!

Readers outside India can purchase After Taste