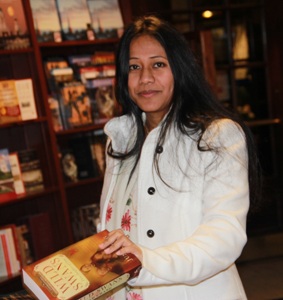 Interview With Binalakshmi Nepram: Women In The Shadow Of The Gun

Binalakshmi Nepram works with women in Manipur who face a dual violence – when their men are killed and in the deprivation that follows.

In the last few years, Manipur has been in the news as a conflict zone where ordinary citizens face the likelihood of unpredictable violence. On the ground though, Manipuri women continue to work to bring peace to the state, with incredible courage and resilience.

Here we meet Binalakshmi Nepram, founder of the Manipur Women Gun Survivors Network (PDF) that works with female survivors of the violence in Manipur, besides advocating for stricter gun control and disarmament. She was awarded as one of CNN IBN’s Real Heroes in 2011.

It is more than a few years now since you began your work helping women affected by the conflict in Manipur. What drives you on?

Binalakshmi Nepram: There is a humanitarian crisis in Manipur, one of the world’s longest ongoing crisis. Every other day 3 to 4 people are killed in this conflict; that means 300 to 400 people every year, whether by the army, police or unidentified insurgents. And many of those men killed come from the poorest families, leaving behind the women to suffer.

When I started working in this area, I wept for Manipur and not just because I was born there. According to the Government of India, this is a law and order problem, not a conflict, but that is like responding to a cancer with a headache tablet.

How are you helping these women?

Binalakshmi Nepram: Whenever there is news of a killing, we go as soon as we can to meet the family. In some cases, there is a need for immediate intervention since the breadwinner has been killed and the women have almost nothing. We ensure that they have some funds to keep the house running at the moment.

The next step is to open a bank account in the woman’s name. In most cases, women have nothing of their own. Plus, it also helps their own safety to have an account in their name since widows may face trouble from other family members such as in-laws. I have seen cases where they are abused mentally or even physically – one woman was actually kicked by her brother-in-law and suffered a fracture. After the husband’s death, they become very vulnerable, and sometimes families even accuse them, that my son was killed because you brought him bad luck.

And in the longer run?

Binalakshmi Nepram: Then, we assess their skills and ask them what it is they can do or would like to learn. In most cases, the women have been housewives and never earned money before. We don’t teach them, but we ask them to come up with what they would like to work on. We help them with small loans needed to start a business. It could be amounts as small as Rs.2500, with which a woman can start a cocoon and spin silk thread.

Once they are assured of food and the children’s education, then they start looking for their legal rights. So, we have a legal rights team consisting of female lawyers, whom the women are more comfortable with. The next step is to find out why their husbands were killed.

Recently, we have also started a support program where we ask doctors in the state to donate a small amount of time where we can bring in these women and get them treated for their health issues. As you would know, anaemia is rampant in Indian women and especially in Manipuri women. The trauma of losing a loved one, mental depression and abuse, physical abuse, the stigma attached to being a widow, poverty – all these worsen their health. A lot of doctors have responded beautifully and give us pro-bono consultation for these women, and even free medication.

Given the backdrop of AFSPA prevailing in the state, how easy is it to proceed with such cases?

Binalakshmi Nepram: To be honest, the Indian Army is now very careful, after the Thangjam Manorama case where women in Manipur stripped themselves in protest.  Much of the work is now done by the Manipur police themselves, and that is where many cases lead to, apart from people killed by insurgents – who may never be identified.

These cases may never culminate in the woman’s lifetime but we cannot leave it; the very act of filing and fighting a case is healing.

Recently, I went along to the CBI with a mother whose son, Irom Roger, was killed by the son of a minister. Even the chargesheet was not filed for over 10 months. I felt the strength in this mother’s voice when she is fighting for justice for her son – it is a process and at least there is a sense that the fight has started.

Working with victims of violence, seeing this violence day after day, how do you and your group cope?

Binalakshmi Nepram: What keeps us going is the feeling that if we get disheartened, what will happen to them? We may weep together, but we also get up together. Whatever love we have given to people, we have received so much more. We say that now we have a house in every village in Manipur!

We work across Delhi and Manipur, because Delhi is where we need to be for advocacy and research purposes, while Manipur is where the on-ground support work happens, under our full-time coordinator Reena Mutum and three more team members, besides many other committed student and survivor volunteers.

What would you count as your group’s most significant achievement?

Binalakshmi Nepram: Through the years, our group has been able to keep this issue on policymaker’s tables – and from a women’s perspective. We have been able to change the political discourse on insurgency, to include women’s perspectives. Last year, a United Nations team visited India for 3 weeks to assess and document our work.

Stopping the rampant infiltration of arms and shining a spotlight on the unregulated arms trade and its consequences – this is a global crisis that needs global tackling. Disarmament has to be about changing women’s lives on the ground.