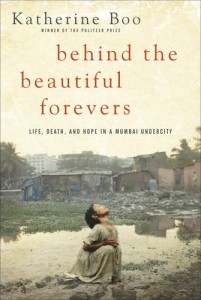 Behind The Beautiful Forevers

Pulitzer prize-winning journalist Katherine Boo offers an incisive look into the underbelly of Mumbai in Behind The Beautiful Forevers.

The cover of Katherine Boo’s Behind the Beautiful Forevers has this quote from Ramachandra Guha: “The best book about contemporary India, the best work of non-fiction I have read in the past twenty-five years.”

The force of that statement depends, of course, on what else Guha has read in the last twenty-five years; nevertheless, that statement both impressed me and made me wary.

I also admit, I decided to read this book after reading Jai Arjun Singh’s review, but his glowing recommendation, topped by the laudatory quotes from Guha and Amartya Sen on the back cover, made me apprehensive. It would be difficult, I thought, for a book to live up to that kind of hype.

I was wrong. The book is both a well-written novel (with characters, plot, intrigue and suspense) and a brilliant piece of investigative journalism. It was fascinating, and even as a reader of primarily, novels (the few non-fiction books I read seem to languish on my desk, unread or partly-read, for months), I found it difficult to put down.

Behind the Beautiful Forevers is an exploration of Annawadi, the slum near the Mumbai airport. It is a factual account, names unchanged, and it delves into a few interesting characters whose lives intermingle; Abdul, the (probably) teenage sorter of garbage, Asha, the teacher who aspired to be slumlord and politician, Asha’s college-going daughter Manju, who had more wholesome ambitions, Fatima, who is tired of being ridiculed for her disability and, by a rash act to gain attention and power, unleashes turmoil into her neighbour’s lives.

Another character in this book, and a powerful one, is corruption. Boo writes about how corruption both ensures the kind of inequality that guarantees few slum-dwellers would ever be able to move out of poverty, and also grants them small ways to make life liveable. “Corruption,” explains Boo, “was one of the genuine opportunities that remained.”

Every person with the power to influence the lives of these slum-dwellers seems corrupt: the politicians, who are like caricatures from Bollywood movies until you remember these are real people, including Asha, Annawadi’s home-grown small-time flunky to the local corporator. The cops and the special executive officer of the state interested not in justice but in extortion. Even so-called social workers and NGOs seem only to exist to defraud donors of funds and the slum-dwellers of aid.

The slum-dwellers live in pathetic conditions. Annawadi lies next to a sewage lake and every monsoon wreaks havoc. Young children scavenge the street for garbage that they can then sell to the likes of Abdul, who himself lives surrounded by garbage.

The book offers no easy answers. There is no hope then, that Annawadi might become a healthy, happy place. The only hope lies in individuals; in Abdul’s willingness to do his duty, in the honesty of boys like Sunil and Sonu inspite of their devastating childhoods.

If you’re planning to purchase Behind The Beautiful Forevers by Katherine Boo, do consider buying it through this Women’s Web affiliate link at Flipkart. We get a small share of the proceeds – every little bit will help us continue bringing you the content you like!

Readers outside India can purchase Behind The Beautiful Forevers

My Life, My Rules