Beautiful Country by Syeda Hameed and Gunjan Veda tells us ‘stories from another India’ although it could have used some ruthless editing. 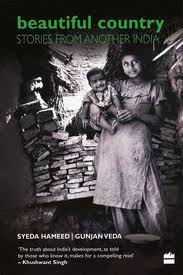 Beautiful Country by Syeda Hameed and Gunjan Veda tells us ‘stories from another India’ although it could have used some ruthless editing.

The authors of Beautiful Country, Syeda Hameed and Gunjan Veda, worked in the Planning Commission and traveled across the country. This book contains tales from their travels and as the subtitle promises, shows us glimpses of the India we know so little about. If only the writing were more compelling and focused.

The writers write movingly of the “othering” of the north east by the rest of India and of the dangers of integrating indigenous people into the mainstream, like in Andaman and Nicobar. While the narrative flounders in parts, it flowers wonderfully when the writers share little details of their adventures, like a young Naga woman bringing them food. The meandering writing isn’t helped by the writers’ predilection for quoting Hindi verses that, nice as they are, have at best a tenacious link to the narrative. It might also have helped to choose not to have so many Indian language words, or else to have them explained in footnotes instead of the frequent interruptions in parentheses.

The uneven narrative at times leaves the reader hanging. The writer mentions that a woman in Manipur advises her to meet Irom Sharmila. She then talks about meeting Sharmila in Delhi later, but makes no mention of trying to meet her on that visit.

There are also inconsistencies in the writers’ arguments. At one point, the writers bemoan the fading popularity of the sari and defend its practicality, “But how could one believe that the sari was impractical and hence a thing of the past? Syeda’s entire odyssey through India was performed comfortably in the traditional six yards of cloth.”

But just a few pages later, there’s this: “Climbing onto a huge loader truck is no easy task, especially when one is wearing a sari.”

The chapter scheme is a bit odd. Passages about Manipur and Nagaland, for example, are clubbed into the same chapter, even though they deal with completely different themes. Then there are unfortunate turns of phrase such as this: “An old man in a dhoti whose name was Bhogilal.”

But the stories themselves are very interesting, and I learned so much about my own country from them. With some careful and ruthless editing, this book would have been a page-turner in addition to the informative tome it is.

If you’re planning to purchase Syeda Hameed and Gunjan Veda’s Beautiful Country do consider buying it through this Women’s Web affiliate link at Flipkart. We get a small share of the proceeds – every little bit will help us continue bringing you the content you like!

Readers outside India can purchase Beautiful Country through our affiliate link at Amazon.