Why does infidelity happen? Are Indians today more adulterous and less moral? Vijay Nagaswami’s 3’s A Crowd attempts to answer. 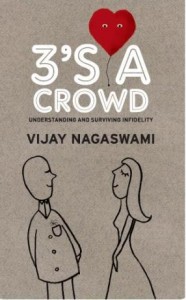 Why does infidelity happen? Are Indians today more adulterous and less moral? Vijay Nagaswami’s 3’s A Crowd attempts to answer.

There is a general perception that infidelity is on the rise today. There is also much hand-wringing one comes across in public discussions and private conversations that young Indians today are less “moral”, less committed to a once-sacrosanct institution.

In this context, well-known psychiatrist and counsellor Vijay Nagaswami’s 3’s A Crowd: Understanding and Surviving Infidelity is a welcome addition to the small selection of popular literature on relationships in India. Most work on relationships in India is either simplistic self-help manuals or research-based writing meant usually for an academic audience.

3’s A Crowd is neither, even though the publishers class it in the self-help genre; while it does have helpful information on surviving infidelity, there is no easy ’10 steps’ path to it. Instead, it is a nuanced exploration of infidelity in India accessible to the ordinary reader. How common is infidelity? Why does it happen? To whom? How do those affected react? Is there a marriage past infidelity?

These are some of the questions Nagaswami attempts to answer, drawing from his experience with numerous perpetrators and survivors of infidelity to provide insightful real-life examples. These stories are among the most readable parts of the book and illuminate what goes on behind affairs like no amount of theory can.

3’s A Crowd is structured as two parts, Understanding Infidelity with its focus on the why and how of the phenomenon, and Surviving Infidelity, which deals with ‘what to do when faced with infidelity.’

One of the things that Nagaswami must be commended for is the perspective he adopts on the morality or immorality of affairs. While acknowledging that a married person who indulges in an affair is guilty of causing others intense pain, he makes a persuasive case for not letting an affair become the sole yardstick to judge an individual’s morality.

He does this by highlighting the common situations in which most affairs occur, regardless of an individual being otherwise moral. There seem to be certain circumstances in which affairs are more likely to occur, such as partners in marriages that have drifted apart or intense sexual attraction, opportunity and a momentary lapse, at work.

Understanding infidelity is an important section because it busts certain myths about affairs – that only ‘bad people’ indulge in them, that it happens only in bad marriages or because of one partner’s undesirability. He also makes the case that understanding infidelity is the first step to dealing with it – and that in most cases, both partners feel pain and have to ‘deal with it’, not just the one who is sinned against.

Section two, on Surviving Infidelity, was not as engrossing a read as the first part. Perhaps because, I too, (like most people, as Nagaswami says), cannot imagine that an affair could ever happen to my marriage, my attention tapered off a little at this point; it didn’t seem directly relevant to me. It is also possible that this section was less interesting because it had fewer stories and was less gossipy!

I can imagine that it would be very relevant though to someone who has faced infidelity or suspects it and needs an objective perspective to help get through it, which friends and family may find difficult to provide.

If you are someone who is curious about the foibles of human beings and about what goes on behind the closed doors of intimate relationships, the book as a whole is certainly worth reading – even if you don’t believe it would ever happen to you!

If you’re planning to purchase Vijay Nagaswami’s 3’s A Crowd do consider buying it through this Women’s Web affiliate link at Flipkart. We get a small share of the proceeds – every little bit will help us continue bringing you the content you like!

Readers outside India can purchase 3’s A Crowd through our affiliate link at Amazon.