India is in need of grassroot level sustainable solutions to tackle the problem of menstrual health effectively.

Based on my experience in rural Maharashtra.

Before I joined India Fellow, I never thought that I would spend my first day in a village attending a practical session on methods of sustainable menstruation along with women living in the rural areas of Maharashtra. I was taken by awe to see a cluster of fifteen women from Karale, a village on the outskirts of Pune, attaining awareness of the methods and hands-on training to stitch cloth pads.

Shifting to using menstrual cups has been one of the best decisions I have taken in my life. Convenience and eco-friendliness have been the standout benefits for me and I have always been a strong advocate of sustainable menstruation in my friends and family circles. Yet, many of my connections are still unaware of the various products available today. Hence, seeing this awareness penetrate the villages of Maharashtra was truly a surprise for me. 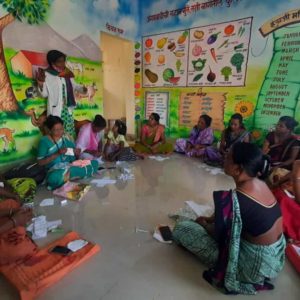 Women participating in the training session

The session was conducted by Yuva Mitra, an NGO working towards rural development in Maharashtra. The women from the village had gathered for the monthly SHG (Self-Help Group) cluster meeting at the Aanganwadi in Karale. Shalini Tai, the trainer said that she has conducted these training sessions in more than 50 villages in and around Pune and Nashik over the past year and a half.

With Nashik being a major manufacturing hub for the type of cotton used in these pads, procuring raw materials has not been difficult. I was keen to know if the women attending these sessions try shifting to these sustainable products. On average, from the feedback that Shalini Tai received, three out of ten women actively try using the cotton pads which they were trained to stitch. 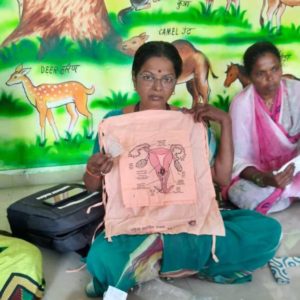 Sustainable menstruation is the process of using eco-friendly menstrual products. However, our country, even today, struggles with the challenge of getting women to use hygienic menstrual products, let alone think of sustainability. The 2015-16 National Family Health Survey (NFHS) stated that 52% of India’s rural women did not practice the use of hygienic products while menstruating. The last one decade saw various attempts from the government, international and civil society organizations to improve this. Policies, such as the Menstrual Hygiene Scheme (2014), helped spread awareness among adolescent girls in rural areas. Maharashtra has shown considerable progress in this regard. [1]

However, a major challenge that has come out of such policies is increased awareness which has, unfortunately, not been reflected in the usage of hygienic products by women. In January 2022, a village in Kerala’s Ernakulam district, Kumbalangi, was declared the first sanitary napkin free village in India. In this program, the government in collaboration with Indian Oil Corporation is distributing 5000 cups to menstruating women above the age of 18. They also intend to sensitize women on using such products through training sessions in the coming months.

However, I am quite skeptical of the success rate of such large scale distribution programs as a solution to the issue at hand. In a society so deep rooted in patriarchal myths of virginity where a woman has barely any control over decisions regarding her body, it would be difficult for such a foreign concept to get a breakthrough. Mere distribution of menstrual cups would never lead to a village becoming sanitary-pad free. We would require generations of unlearning to bring change at this scale.

However, reflecting from the curiosity and excitement of the women who participated in Shalini tai’s session in Karale, I strongly believe that promoting the use of cotton pads would have considerable scope for scale in rural India. The onus of bringing this change is however not only on the menstruators.

Inspired from the concept of microfinance savings, 19-year old Mausam Kumari from Nawada district of Bihar was recently lauded for her attempts to address the problem of access to sanitary pads in her village.[2] During the lockdown in 2020, this was a major problem that rural India faced. Mausam identified the social issue in her village four years back and started a Sanitary Napkin Bank (SNB) with a voluntary contribution of Rupee 1 from women and girls. During the lockdown, these SNBs distributed napkins for free to the needy as well as made them available for Rs. 30 per packet. Mausam has succeeded in setting up 27 SNBs across 16 panchayats of naxal affected Rajauli block in Bihar

India needs more such grassroot level sustainable solutions to tackle the problem of menstrual health effectively. Money spent on large scale distribution drives with major political agendas should instead be channeled towards scaling up models like this.

Countries like Scotland have made menstrual products available to their citizens free of cost. While India might not have the fiscal bandwidth to afford programs at such large scale, our health budgets and policy decisions can align itself to focus better on sustainability and access to such products across all strata.

Civil society organization can take up the responsibility of not merely focussing on awareness but instead build sustainable replicable models like that of Mausam Kumari in Bihar. In a country where 62% menstruators rely on cloth (NFHS 2015-16), a shift to cotton pads or biodegradable products should be a possible demand for change in the near future.

[1] Menstrual Hygiene Management Programming in Maharashtra: The journey of a decade

About the Author : Anushka Abraham is a 2021 India Fellow, placed with Chaitanya WISE in Madhya Pradesh. Chaitanya WISE is strengthening self help group federations in Ujjain. Anushka will help the team in capacity building, content development and project management. She would work on enhancing financial literacy as a tool for women empowerment. 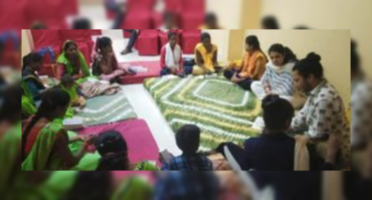