The Ghost That Finally Revealed Itself!

Leading a half-life made her think of herself as a living ghost. Not the white-clad figure seen floating ethereally, but a person who remained unseen in her marriage and by the world at large.

She felt unsure. Was she dreaming it all? She kept looking at her hands as if expecting them to waft away in wisps of smoke.  Being deferentially seated at a table in the Taj Mahal Palace and Tower was not something that happened to her regularly. No wonder then, that she felt out of place, a fraud.  She knew that she had earned her place here, but was still far from convinced. Years of leading a half-life had made her think of herself as a living ghost.

She had found herself only recently and her pen had helped her make her way back to the world of the living. As the popularity of her anonymous writing slowly grew, thanks to the new tool of social media, so did her confidence.  A helping hand in the form of her niece had materialized to aid her with the finer nuances of social media like Facebook and Instagram, hitherto closed books to a reticent person like her. And it had helped. Her pen name, derived from her late father had become one of the most searched ones across Google.

It was that time of the year when all sorts of awards are announced. Ranging from those in the world of dance, drama and entertainment to the Padma awards. But these belonged to the world of those who lived life on a “Grande” scale. For those who lived the simple life, watching all the award ceremonies provided a vicarious pleasure, a peek into a life to which they would perhaps never be privy, but could enjoy from a distance all the same.

But this year was to be different in more ways than one. A ghost would be acknowledged as the winner of the “Popular Choice” award of the Hindi Chalchitra Kavya Sanstha, a newly established association for rewarding excellence in Hindi film lyrics. Not the sort of white-clad ghostly figure seen floating ethereally, ready to disappear in a puff of smoke, but a person who had hitherto remained unseen by the world at large, known only by the pen name of Amarja. Thanks to the lyrics of a song penned by her ruling the roost of popularity charts for at least six weeks now.

Of course, Alina Chattopadhyay’s ethereal beauty and Shishir Deshmukh’s music had a lot to do with its popularity, but the song “Paani” from the movie “Adhuri”, most famed for its haunting lyrics, “Jo na sune koi teri dastan” (whoever does not listen to your story) had broken all records. This was even more of an anachronism in a world where popularity was lost in the blink of any eye, which was famed for its here today gone tomorrow lifestyle.

When the letter announcing her nomination had arrived, she had scarcely believed it. It had lain unopened in her drawer for a full two days before she convinced herself that it was true. She had managed to send in the RSVP by the skin of her teeth. And, now here she was, dressed in a saree, feeling utterly out of place and gauche` among the well-heeled. If she thought she had known snobbery at home, she was now witnessing it carried to new heights, with little cliques springing up everywhere. She of course, sans entourage, was not part of any circle and barely even made eye contact with anyone. She was of half a mind to get up and walk away, but when she remembered the domestic drama her departure had caused, she was determined to sit it out until the end.

Judging by the popularity of the song, she had for once felt the stirrings of hope, but she had immediately quashed it down, realizing its futility. Another habit long ingrained into her by constant disappointments and the belittling of her hopes and aspirations. It was popular knowledge that many of these awards were notoriously “fixed”, with a pre-decided winner but this one being a new one which involved a lot of public opinions and being touted as transparent, held a modicum of promise, since she a virtual unknown had managed to even make it to the list of nominations.

Numb was how she would have best described herself when her name was announced, beyond pain and pleasure, beyond joy and sorrow. Yes, she did feel overwhelmed, largely by the curious craning of necks to get a glimpse of her and the incessant flash of cameras and mobile phones to capture her picture. Only after receiving the trophy from the famous poet Randeep Singh Khattar, did she realize that she was expected to make a speech and it was being beamed live, for the world to watch.

“I don’t want to run the usual gamut of thank yous,” she began “but I would like to acknowledge the Higher Power which animates all of us for guiding my pen and my thoughts in the right direction so that my song gained immense popularity.” With the audience now rapt in what she had to say, her voice grew stronger.

“However, I would like to thank my family, especially my husband, for being the gale in my face, thus teaching me to push my way through storms undaunted. For making me lead a half- life, that of a ghost, seen but never heard, so that I lived a life devoid of expectations. Were it not for him, I would have never learnt the truth in Krishna`s preaching in the Bhagvad Geeta, that we have a right over our actions, but none over the consequences. That to indulge in the right action with no expectations whatsoever is the truest from of worship. And it is this worship that God in his wisdom has perhaps decided to bless in the form of this award.”

Life in the Sharma household followed its own pace and traditions. The time after dinner was when the privileged members of the family, (read senior Mr and Mrs Sharma and their sainted son, Advocate Abhay Sharma) watched TV from their earmarked nooks in the gracious lounge. Today, the scene was different because Abhay`’s wife the quiet, submissive Ketaki had found the temerity to rebel and go out for the evening without informing anybody of her whereabouts, leaving the family to fend for itself.

As if this was not dramatic enough, here she was, being beamed live on ABP News no less, having won the popular choice award from the Hindi Chalchitra Kavya Sanstha, a newly constituted but hugely popular association, reputed for its clean image. The lyrics of a song he had heard as a child sprang unbidden to Abhay`s mind, “Tan ki Daulat dhalti Chaya, man ka dhan Anmol, Tan ke karan man ke dhan ko mat maati me raund, man ki kadar bhulanewala veeran janam gavaye, Tora Man darpan kehelaye”  (The wealth of the body is like a fading shadow, the wealth of mind is priceless, do not trample the wealth of mind because of the body, the one who ignore the significance of mind waste their life, your mind is a mirror).

Yes, the ghost of his making had finally stepped out of the shadows to haunt him AFTER finding her place in the sun and ceasing to be a ghost…. 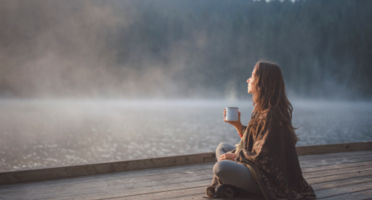