I looked at my watch. I had taken 15 mins to get ready, including hair wash and make up and clothes. By the time my friends got ready and we all could leave, it was 9pm. We reached the venue at 10pm.

I was attending a male friend’s wedding in a different city many years ago. For the first time, I was out on a holiday by myself, sans family, sans children. I was given a solo room in a club while my friends, all men, were sharing, two to a room. I was so thrilled at being out on my own for a couple of days, that I had a luxurious bath, washed my hair, got dressed (it was the ‘bachelors’ party that night), put on some makeup and checked the time. It was about 7.40 pm. We were all to leave for the venue of the party at 8.

I laughed looking at the time. I had not had the luxury of being ahead of time for many years. Normally, I’d have to bathe the kids, figure out their clothes, dress one, then another, and finally throw stuff on myself and when I’d step out ready to leave one kid would want to go to the bathroom. Sometimes another would spill something on themselves.

By the time I’d exit the door, I’d find the rest of the family, their faces dark as thunder on account of my tardiness – “Hema can never be on time,” was the refrain.

Even now when the the kids are grown up and we go to lunch on one of their birthdays, I play a big part in first deciding the venue, then they’ll consult with me on their clothes, one of them will not find their blue jeans with the rip on the knee which is basically every single pair of jeans in the household. But when I stand in front of their cupboards which they swear they have turned upside down (this part is usually true by the look of it) in search of the errant denims, the pair magically materialises. I roll my eyes while they exclaim at the witchcraft that even inanimate objects are afraid of me.

And so by the time I figure out my toilette, we are all late as usual, because I can never be on time.

For many years I believed that I was tardy in character. Until that year when I went to my friend’s wedding.

I had actually believed in my ‘tardiness’… until then

I went and knocked at my friend’s room, thinking I’d surprise them and not live up to the stereotype that ‘women take so long to get dressed’, only to find none of them ready. Not a single one. They were all lolling about and when I tried to hurry them along, they laughed. It will just take us a couple of minutes, they told me, we’re not women to take forever to get ready.

I looked at my watch. I had taken 15 mins to get ready, including hair wash and make up and clothes. By the time my friends got ready and we all could leave, it was 9pm. We reached the venue at 10pm.

Putting myself last is the default

For a quarter of a century, I have never had a headspace that only revolved around me and my needs. I have always had to plot and plan, organise and arrange, for at least two more people, and as years went by, more people kept adding themselves to my list of people whose comfort I had to keep in mind.

If I’m going for a walk, I need to remember to pick bananas, regular ones for someone, elaichi kelas for someone else; someone needs peanut butter, but not the chunky variety. Another messages me saying can I please order something for him to eat because he hates the food at home. I have to remember to withdraw money and I have to remember to account for more time because since demonetisation the number of ATMs are fewer and most ATMs have long lines outside. I get back home late from the walk and a senior citizen in my care refuses to let his helper change him, and so I have to attend to that before I can step into my home even though my bladder is about to burst.

Yesterday my son said he doesn’t wish to go to the mall because we take so long. The last time we went to the mall, it was to buy Diwali clothes for the entire family, also none of us had been to the mall for close to two years since the pandemic. We first bought clothes for him for Diwali which took about an hour, then for my daughter, another hour, then shoes and then I was so exhausted, I bought nothing for myself and wore a 40-year-old saree on Diwali day.

And so when a girlfriend forwarded me this meme below, I stared at it for a long time. 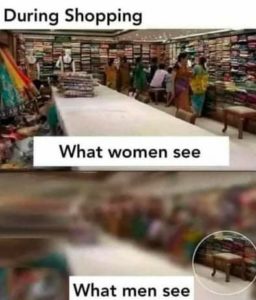 It was true, I realised. I have never had the opportunity to wait outside the shop or sit on a sofa inside one. To be comfortable and impatient and not frazzled and feeling guilty of making people wait. I want to experience that. I want the luxury of my time, for myself.