Olympics Done, Medals Won, But Will Lives Of Marginalised Athletes Change For The Better?

Torchbearer for the 2012 Olympics, Pinky Karmakar, was in news yesterday. The former Olympics star toils as a tea picker in Assam. Will the new crop of winners be more fortunate?

Torchbearer for the 2012 Olympics, Pinky Karmakar, was in news yesterday. The former Olympics star toils as a tea picker in Assam. Will the new crop of winners be more fortunate?

Yes, bringing home a Medal and carrying the Torch are different feats, but the outcome doesn’t differ much.

There are enough and many stories of medal winners selling their medals, selling vegetables, doing odd jobs to sustain themselves after the events were over and the stadiums were locked up and the journalists moved on, and the world forgot about them. The home fires still had to be lit up.

Unless you join the government and become some sort of a minister, and accept a position of no authority coupled with no work. And perhaps, sell your soul. Unfortunately, even this option is only for the privileged.

Sports always gets the back seat in this country, once its ‘purpose’ is over

Over the years, I have seen many privileged students who excelled in sports- track, swimming, basketball, tennis,… they get the best of coaching, the best resources, the best diet. They play to have fun and secure admissions into good universities, here and abroad. Not only on a sports quota but also because extracurricular activities are a magnet for any admission process. And then, nobody returns to the sport or the game they gave their childhood to.

The underprivileged use sports (far better athletes– given their lack of resources, trainers, and diet and what they still achieve) for government jobs. It is their one shot at security.

But, sports doesn’t pay, except for a very few. There are not many jobs in schools and colleges either. PT teachers are neither valued nor an intrinsic part of any institution. Sports Day comes once a year, and preparations start in earnest three or four weeks in advance. And then, after that, it is back to one games period a week, which rather tragically, is also fought for by other subject teachers trying to finish the syllabus, and make up the time lost due to sports day practice.

The rich realize this, they play sports for achievement. The poor play sports, for it’s their ticket out. There is no glory involved.

Bunch of hypocrites we are, we laud parents who use their meager savings to buy a device for online classes. How many of us facilitate any learning besides education? And how many of us can afford to allow our children to pursue what they want to? Education at least guarantees a job, however inadequate, but sports is a quest.

And society doesn’t reward anything that it doesn’t understand. And, it doesn’t understand anything except academic achievements. Reducing the sports budget by 200/odd crores is meaningless, the total budgeted quantum is inadequate. No one protested this then. Those whose voice matters and reaches, find their own solutions, and others never had a voice, to begin with.

This gold medal is NOT a societal achievement. It is a personal one. A parent telling his son to focus on the sport while he manages the farms is no different from the parent who builds a shooting range for his son. Others have contributed, indeed, but the credit goes to the parent for not only encouraging but also supporting their child’s sports quest. It is a personal struggle and achievement and a parental one, and given that it takes a village to raise a child, credit is also due to the local setup; to the truck drivers who supported Mirabai, and many more supportive and silent well-wishers.

Will our government and big names in sports do anything to change this systematic neglect at least now? Or will today’s stars also find themselves struggling with their lives with a living to be earned? 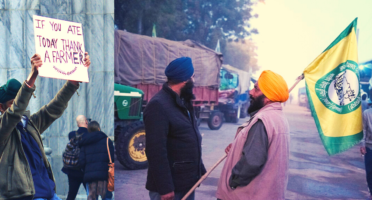 Lohri, Pongal, Sankranti, Bihu... Some More Reasons We Should Be Grateful To Farmers