Hard Enough To Blend In

Every time she suppressed the suffocation of bearing the baggage, she knew that one day she would have to stand face-to-face with her vulnerability; her fear.

It was the time of the year when the whole Fernandez folk assembled under one roof despite the grudges they held for each other. Though staggered at the demise of the old patriarch, the DNA they shared possessed the power enough to align them in a line, at least for the sake of the disputed mansion.

Though neurons were juggling between thousands of synapses, her feet took her through the familiar lane which once used to be her one of the camouflaging spots. If not for the path where the life had taken her to, she wouldn’t have been meandering through the lanes in the chilly dawn of October. It was solely her decision to abstain from every family gathering despite the remarks she had to bear. Why scratch on the old wounds and make it bleed? They say that time heals even deeper wounds. Time… Isn’t it what she is deprived of? Time has eventually become just another entry in the list of things that she had been deprived of.

Swallowing the pill of optimism, she put her shoe every day hoping for a miracle that could change her staggered life for good. Like any other girl, she too used to believe in fairytales and the fairy Godmother that would appear to rescue her with just a wave of the magic wand. But it just remained as one of the imaginary worlds she preserved inside her. After half an hour’s walk, she turned the curved path to run into a heart-melting smile.

“Didi, finally you are here,” exclaimed the boy with all glory radiating from his face.

“This Mr. India game of yours is not that great yaar. Do you even remember the last time we met? Wait, you remember me, right? The oddball in our circle?” his eyebrows arched up.

If not for the photos she has been getting from the family WhatsApp group, she wouldn’t have recognized the cousin of hers beaming before her. The only male in their cousin circle.

Hearing his rambling she didn’t feel as if it has been years since they have met or talked. His image of tailing behind her for toffees somersaulted through her neuron loops. He has grown up, almost of her height. Along with the conversations, it didn’t take long enough for them to reach the mansion where her maternal roots pierced into the soil. Like all those glitters were not gold, Fernandez Mansion was all facades of chivalry and oneness over the prying eyes for the property among the bloodlines.

“Look who is here. Beta it took this long for you to realize that you have some blood relations here?”

“Your bachelors are completed, right? But still busy even to have a word or two with us?”

“It looks like didi is not taking enough care of you Ahana, you look so pale.”

“When did didi prioritized something over her job?”

“You came alone from Australia?”

The last question stopped her eyes from wandering amidst the bunch of people chatting in the living room. Her mother hasn’t touched the land yet. Neither crestfallen nor surprised, she let all the questions soak her skin. Replying with a tender curve on the face, she climbed the flight of stairs. Though the Fernandez Mansion spread over a vast area, the corner most room on the first floor possessed inexplicable warmth.

She let her fingers run over the polished wooden door. The scratches she once did on the door beneath the wood wax coating got goosebumps that the door creaked open. Her room looked the same but smelled more of the wood wax. Placing her sling bag and rucksack on the bed, she drew the white curtains on either side.

“Do you know what does Ahana mean? First rays of the sun,” a familiar elderly voice reverberated in her ears as she drenched in the stream of sunlight. The lone tear that escaped her cold eye perplexed at the embrace of warm rays.

Soon she found herself staring at the long mirror of the wardrobe. Her eye bags hid convincingly under the concealer. The black liner on the upper lash line imparted liveliness to her non-lively eyes.

“Just do what I said. And you, stop looking at me like that Ahana. Don’t know why on earth you had to have his eyes. Don’t you know I hate your father?”

“If so, you would have been living with your father and your stepmother. Not with me.”

“You could have said you love me.”

“Grow up Ahana. You have become a woman now. Just fill the application form. Now.”

The pinging of the phone dragged her to the present. She doesn’t care to read the message. It was too late when her parents realized that they can’t tolerate one another under a roof. But it was too early for her to get exposed to the shades of the world. Tucking the strands of hair behind an ear, she engraved her reflection in mind. Forever.

“I knew that I will find you like this,” she turned back to find her mother on the threshold of her room. “You want me to repeat every single time? Didn’t you get anything else to wear?” she said not so pleased with the blue denim and long sleeve chiffon top of her daughter. Her mother was not only the elder daughter of late Fernandez, but her ego was also the eldest. “What’s with that ponytail Ahana? Leave it loose.”

“Listen, Claire is just an employee. No need to be friendly with her. She told me that you had a checkup in that hospital last month. Your ears might have been filed against me. That’s what he is good at.”

“I didn’t go there to meet pappa. He moved to Melbourne two months back.”

“Melbourne? Such a…” she adjusted her sari on the shoulder in an attempt to balance herself.

With every passing syllable, she expected a ‘how have you been’. But her ear ossicles were not that fortunate. It was almost after one month that she is seeing her mother. But Helen Fernandez found it profitable investing in share markets rather than in emotions. Her busy mother was too concerned with the lectures in keeping up their class that she failed even to acknowledge the pale face of her only daughter. Once again she underlined that expectations hurt. But the optimistic gene in her never fed up in weaving expectations but only to get hurt. Life. It’s hard enough to blend in.

In the living room, the Fernandez clan was all decked up for the prayer but their faces held another story. It was time for the free flow of manna dew. To persuade others for an appealing share in the property was gliding through their nervous systems. The tight air in there prompted her to step out into the lawn. On the green carpet of grass, her little cousins were immersed in their world. They were too naïve to draw lines among themselves, unlike their parents. Though the elder one in their cousin circle, she hardly knew about them. It has been seven long years and they were all kids then.

The wet grasses held her bare feet while she let her fingers feel the bushes. The purple orchid trees which stood on a line invited her to their lap. Eyes fixed on the cousin folk in a distance; she sat down leaning on the trunk. The mobile phone pinged in her jeans. Letting out a deep breath, she checked the inbox.

First chemo session on the 20th of this month. Your appointment is at 10, morning. Take care.

“Claire,” she breathed in.

Even before she could savor the raspberry candy scent of the orchid, a shadow cast on her frame but what caught her eyes was the crumbled orchid under the polished black shoes. She didn’t have to look up to see who it was. The cologne that lingered in the air was enough to send chills down her spine. A sudden urge to disappear washed over her. At those lone hours whenever she wished to disappear from his eyes, she had only found herself more trapped, more vulnerable.

Ten years back, she could only hide in the dark nooks of her room like a ragdoll. With the change in the air, there were various instances when she wished to bare her soul in front of anyone; to tell how scared she was to utter anything. Flee to Australia just physically rescued her from the pain but the scar was already been made. Every time she suppressed the suffocation of bearing the baggage, she knew that one day she would have to stand face-to-face with her vulnerability; her fear. Now that every second of her life is being numbered, it was the time for her to leave behind the baggage which she had been bearing since childhood.

Taking a sharp breath, she stood up, darted straight to his eyes. Though his hair and jawline carried grey streaks, his eyes held that sinister smile.

“It’s good to see you back. All grown up,” he smiled but his eyes were having a play of its own.

“Yeah uncle, grown-up. I’ve turned eighteen last Friday,” Jaison made his way between them swiftly enough to wipe that smile off his beard.

“You know what uncle; pappa was saying that I have to be responsible for life. But I told him there itself. That I already am responsible and all the credit goes to his friend, our manager, Mr. Vincent.”

She watched the scene unrolling, clueless where the conversation is heading. “Thank you so much, uncle. If you weren’t there, I would never have learned that great lesson of life. Look, I have become the bodyguard of my six sisters. Seven actually,” she watched the jaws flexing beneath the grey beard as Jaison wound his protective arm around her and walked past him.

She doesn’t felt the need to look back. With every step, she was feeling light. She feared if the breeze would carry her with it. She held onto her little brother who was indicating the girls’ clan to get inside the mansion. Her lips curved up with a tremble. Maybe life was not that cruel. There would always be light at the end of the tunnel. Maybe the fairy Godmother has found her. 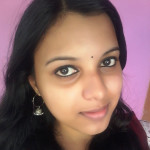 She's a literature student. When she's not writing, you can find her reading