But I can say with a great degree of certainity that acts of kindness are desperately needed and as rare and lone as they come but in their exclusiveness and scant-ness lies their value.

While scanning my blog for the umpteenth time, I wondered whether I had anything new to say. As often happens to me, the realization that I didn’t led me to an acute sense of frustration. At that precise moment, a close friend of mine and fellow blogger messaged me with the link for a blog which was asking to be read for its touching content.

In my state of low self esteem over my writer’s block, I decided to skip viewing the same. At any other time, I would have been very curious to check out a blog recommended by Priya, a writer I greatly admire and a friend who I unabashedly adore. But, well that was that.

The next day as I was leaving for my internship with the same bad mood looming dangerously close being uncharacteristically late, I chanced upon a rare act of kindness. This act, small and perhaps insignificant on any other day is the inspiration for my current blog entry. Someone somewhere has rightly said that the human mind works in curious ways.

On that particularly bad day

Often, I credit myself on having a sunny disposition and I’m rarely ruffled by much. Two things irk me the most- insensitivity and a lack of tact. That day, I noticed myself heavily lacking both, tact and sensitivity.

The man driving me to work was in his early twenties, my age. He was appointed by my over protective father to escort me everyday without fail to the office at a short distance by metro and a distance I could easily cover alone. But, well Dad’s orders need to be followed and in no need for another round of  arguments, I had agreed on this minor adjustment. The man was usually quiet during the course of the forty five minutes or so journey we took together and his lack of small talk capabilities suited me just fine.

I liked making mental lists and fully rousing myself from the sleepy state I usually was in en route to office, chitter chatter was therefore never a priority. That day, being an unusual day of sorts, ten minutes into the journey and while waiting for the signal to change at the first crossing, the man whose name I later learnt to be Madan began a conversation largely one sided.

He never seemed to be in a particulary cheery mood but that particular day he seemed not just happy but unusually animated in a kid in a candy store kind of way. “Didi aapko pata hai, aaj mujhe meri salary mil gayi  aur pehli baar boss ne chutti ke liye bhi haan kar di hai,” he started. I nodded as a vague acknowledgement of his statement. He went on not having paid attention to my apparent lack of interest.

He looked at me from the rear view mirror perhaps expecting a congratulations or even a smile. He got none. I didn’t consider my actions to be in anyway unkind, I was just in a bad mood or so I rationalised. However unperturbed, he went on to describe the ‘haseen vadiyan’ of his hometown and his sister who was about to get married etc.

My patience was reaching its limit and to make matters worse every signal we crossed on that generally traffic free route was turning out to be red. I tried to keep my cool.

A second after this outburst I wished I would die right there, it wasn’t merely the fact that I had let myself down, someones who boasts of being someone who cares. More so because Madan didn’t react, didn’t look angry, ashamed or even disappointed. He did however stop talking and I tried to calm my nerves while simultaneously thinking of exuses to feed to my boss.

We finally reached  the office. By that time I’d forgotten about my distasteful behaviour being  more worried about my impending fate, I was fifteen minutes late for the meeting and didn’t have the pre requistite report. The day went just as I had predicted, my boss was very angry, humiliated me in front of other interns not completely without reason and I was not given any work the entire day.

By the time Madan came to pick me up for the return journey I was much subdued and on the verge of tears. I eventually did break into tears ten mins later, the entire day’s happenings, my bad behaviour, my lack of responsibility everything coming out in a torrent of sobs. I was mildly aware that there was another person in the car who could witness it all but was too tired to care.

Madan who had been watching me cry quietly for some time finally looked back, a little hesitant perhaps framing his words or perhaps unsure whether he should initiate any conversation at all considering the day’s past happenings. He however turned out to be the bigger person, gave me his hanky and said ” madam, are yeh sab toe hota hi rahta hai, aap pareshan mat ho, kal se mein thoda jaldi aaonga, aap aaram se sab rakh ke aana, jaldi baazi mein hi aap bhool gaye hoge”. The simple explanation for my blunder, the humility in his gesture considering I’d insulted him just hours back and the acknowledgement of a certain humane bond which made him care was just the dosage of pep I needed.

I smiled back at him, this time a proper smile, of kinship, of gratitude not the courteous one I’d worn in the past. I asked him his name, not as a small talk endeavour but since it was only proper that I thank the person from whom I’d heard the only kind words the entire day by name. And Madan, he was there for the remaining days of my internship.

We will not meet again I’m sure of that and I’m not the dramatic sort who imagines that we made a difference in each other’s lives. But I can say with a great degree of certainity that acts of kindness are desperately needed and as rare and lone as they come but in their exclusiveness and scant-ness lies their value.

I thank Madan for making me realize how small I really am and how utterly naive, how I never valued or returned the chance encounters, the small talks and the lessons that invariably follow them. I DO NOW. THANK YOU 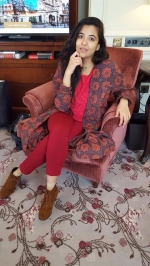 How To Not Be Lonely During Solo Travel

My Father: An Ordinary Hero

With A Simple Act Of Kindness And Selflessness, He Restored My Faith In Humanity