And I Realised That I Didn’t Want To Get Married, Not Yet…

This brooding was long over-due, but I was so caught up in the vagaries of life that I had unintentionally embraced the waiting game.

This brooding was long over-due, but I was so caught up in the vagaries of life that I had unintentionally embraced the waiting game.

“Put away that hammer, and take a stance with the wand. It would look so much better on you.”

This is one of the earliest memories of how the waiting game began for me. I must have been about five or six years old when I was made to believe that others were more capable of making choices on my behalf – and that I must wait till I am deemed fit to decide what I may or may not like.

The Mighty Thor was my favourite superhero. So when we were asked to dress up as fantasy characters of our choice for a celebration at school, I could not think of going as anyone else. I distinctly remember how holding that hammer in the prop shop made me feel so powerful and in control – but my mother felt otherwise. She was of the opinion that it was better for me to go as the Blue Fairy.

“Once you’re a little older, you can make your own choices.” She had assured me that almost two decades ago.

Yet, as I sat in a swanky tearoom today, wearing a newly purchased sunshine yellow ethnic kurta – waiting for a date that has been set up by my mother – it dawned upon me that the waiting game was still not over.

The truth is that I am more of a coffee person – in fact I don’t drink tea at all…and my ‘ethnic wear and oxidized jewellery’ phase was pretty much over by the time I graduated from college. As a corporate communications executive for a retail magnate, my preferred choice of wardrobe has been western formals these days – and a sober colour palette at that.

However, my family was of the opinion that since Harsh was a surgeon in the United States, visiting India on vacation aka bride hunting, he would have a penchant for everything that is quintessentially Indian. Therefore, the tearoom and ethnic wear were at play.

Harsh walked in exactly at the scheduled time – a virtue rarely found and much appreciated. He also exhibited his courtesy by bringing me flowers and paying a compliment in the first few minutes of the meeting.

“I love what you’re wearing. I’ve always been a keen admirer of these traditional motifs on Indian fabric.”

“I couldn’t have guessed!” is what I said aloud. “How predictable” is what I chuckled to myself.

As we got talking about our professional lives, I learnt how Harsh always wanted to be a surgeon and practice in the United States. The idea of their only son moving abroad had initially not gone down well with his parents, but they eventually gave in to their son’s wishes after some pursuance.

I, on the other hand was always more interested in being a publicist for the art, fashion and lifestyle segment. The idea of hosting celebrated food journalists to critique a new restaurant one day – to planning a photo-op with a starlet donning an upcoming designer’s couture the next day, is what I had aspired to do.

An enriching internship with a diva of lifestyle PR had earned me a permanent position in her enterprise. Yet, I found myself applying for a corporate communication job opening as it seemed to have more decorum and discipline according to my folks.

Sensing that he had salted an old wound by discussing professions, Harsh quickly changed the topic to a more cheerful phase. “I’m sure you must have really enjoyed your school life unlike me. I was just struggling to measure up to the geeks of the science section throughout high school. You have no idea how heart-breaking it can be to see your friends from other streams making the best of their school lives.”

As I said these words, the solemn soundtrack in the tearoom added a much needed gravitas to my statement.

I had always been interested in pursuing humanities. History, Sociology and Literature fascinated me. As the student editor of the school magazine, I was far ahead of most of my contemporaries in creative writing and ideation, but I was compelled to take up Science by the family.

Harsh had no idea where to divert the conversation next.

There was an awkward pause where we both quietly dug our faces into our teacups. One sip of the exorbitant gourmet tea, and my taste buds reinstated my dislike for the beverage – evidently.

“You don’t seem to like this Sundried Rosella. Should we order something else? Raspberry Oolong or Tahitian Vanilla maybe?” Harsh inquired politely.

I remember reading the benefits of rosella tea on the menu. It was supposed to help prevent hypertension and reduce blood sugar levels. Maybe they should add another benefit about igniting the mind from timeless slumber – because that is exactly what it did to me!

Those were my words, but what I meant was that I am done waiting for the validation that I am capable of making my own choices.

Never before had I introspected on my life chronologically in one sitting. This brooding was long over-due, but I was so caught up in the vagaries of life that I had unintentionally embraced the waiting game. I was rather amazed at how this realization came about, but grateful that it did.

Harsh was wonderful – but in view of my sudden awakening, I did not want to say yes to marriage just yet. Thankfully, he understood. We moved our meeting from the affluent tearoom to the crowded food court in the nearby mall. Suddenly there was so much more to explore – about the food, about each other…and about life! 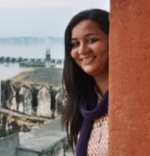 Priyamvada left a decade long career in the television industry in Mumbai a few years ago to restore a 150 year old ancestral fort in Rajasthan, give the village of Meja a new look, and read more...