Posted: September 28, 2020
Tags:women in cinema
Writers, Instagrammers, or Video Creator? Join us at the Orange Flower Festival on Jan 22nd!

A close look at Smita Patil’s Bhumika tells us that it is more than the on-screen portrayal of an actor’s life story; it reflects our search for our role in life.

In search of an eternal role. A search we all are perpetually engaged in. Towards self-fulfillment or maybe searching that perfect fit and a perfect life. Smita Patil’s Bhumika juxtaposes this basic human tendency with the life of an actress flipping roles both on and off screen.

The huge canvas of life on which this role playing happens, and the confluence of real and reel life further heightens and transposes the character into a make-believe world even off screen.

I had seen Smita Patil’s Bhumika the first time around in the early 80s and to my mind, in those times, the character seemed definitely unconventional and perhaps even unrealistically bold. Today on revisiting it, the film revealed more to me in its layers.

It is important to note here that times have changed to make such unconventional and even unsettling lifestyles possible and acceptable for and to women.

The tragic, wounded, unsatiated life of Hansa Wadkar (the Marathi actress of the 40s on whose life the film is broadly based) haunts us, and compels us to explore the why’s of what she went through.

The film traces her life from childhood to her late 40s, and the various circumstantial and situational incidences that define her career and personal life. Her decisions, choices, involvements, and her multiple relationships lead us into an iconoclastic journey that intrigues a viewer as much today as when it was released in 1977.

A film ahead of its time

The film was characteristically ahead of its time, and challengingly early for the actress Smita Patil who was just all of 22. Playing the role of the protagonist Usha, traversing from a teenager to middle aged woman dealing with a plethora of situations and emotions must have been a daunting task. Nevertheless, both the film and her performance achieved critical success and the National and Filmfare Awards.

Under the able direction of Shyam Benegal, Smita Patil’s Bhumika is a masterpiece as it also in a way captures in a slice of life fashion the film industry then, and how it emerged over the next 2 decades.

What is the story of Bhumika?

The protagonist has a fragmented life all through, and that in many ways seeds the reason for her actions and decisions.

The two women who influence her early days, the grandmother and the mother are in conflicted positions as they respectively pull her into and away from the traditional devdasi tradition through the art form of singing.

While the grandmother wishes to nurture her talent, the mother who feels lucky to have escaped the devdasi practice by ‘marrying a Brahmin’, hopes for a different life for her daughter too. The early streak of revolt and rebellion thus emerge in Usha. Absence of a strong father figure only accentuates it.

Choosing the wrong partner in Dalvi (Amol Palekar) as an act of rebellion sets off a series of unprecedented incidences.

The men in Smita Patil’s Bhumika

Amol Palekar, the only constant in Usha’s life plays the exploiter, the authoritarian, the empathizer, and then finally a victim of his own doing over the years with great alacrity. His eyes express it all, and in a way mirrors Usha’s life.

Usha on her part seeks life beyond this unfulfilled relationship in other men.

Perfect mystical romanticism is found in a cynical director Sunil (Naseeruddin Shah) in a short and abrupt affair. And the role of a typical pampered housewife is ostensibly achieved by her alliance with a conventional and tradition bound wealthy businessman in Vinayak (Amrish Puri), which again ends abruptly, as with it comes the dominating, protective, and prohibited lifestyle, which she had not prepared herself for.

She seeks friendship in Rajan, with whom she is paired through most of her career. However, he in turn harbours a romantic interest in her. His self-explorations in the mirror seeking answers for him not being wanted in the same way by Usha, are an interesting aspect of a man woman relationship that is misunderstood by society and by the protagonists themselves.

Archetypes of roles we all play through life

It is rather interesting to note these attractions as archetypal characters ingrained through cinemas portrayals. Much like her we all find our own inspirations and weaknesses in this larger than life canvas of make believe worlds.

Usha’s eternal search ends in her getting back to Mumbai alone, but with a realization that she will now have to deal with her loneliness ahead all by herself. A tired woman, a failed destiny, richer in experience which has still not prepared her for her role ahead.

Smita Patil’s Bhumika is a truly gripping saga on understanding women and the societal influences on their lives and choices. A film that really chose to present the woman from a very non-judgmental point of view, it endeavored to create a space of choice for a woman and narrating its repercussions in a patriarchal society. 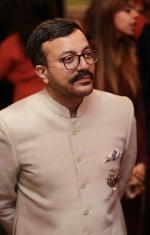 “I Will Stand By My Sister No Matter What!”

Here’s An Interesting Idea – What If Sita Hadn’t Married Ram? What Do You Think?