Raising your child as a feminist, means, giving them the freedom to question and challenge the patriarchal culture, rituals, norms, values, and stereotypes.

Early years are the most critical years of a child’s life. During these early years, children learn from their surroundings by observing and imitating their family members. These observations and imitations create norms, values, and stereotypes for the children.

Home as the primary institution of socialization starts creating binaries of values, roles, and materials for boys and girls. These binaries and power hierarchy of males over females stems out from the social structure of Patriarchy. Home is the institution that helps in strengthening or weakening the power dynamics based on any kind of social structures that exist in our society; caste, class, gender, age, religion, ethnicity, age, language, and disability.

To break patriarchal stereotypes and free children from gendered norms and values, parents often say that they try to raise their children in the same manner without any difference. But the question is “What are the norms ” you have set for your child/children to achieve as standards?  Are these norms gendered?

Family; joint, nuclear, or single-parent have their own set of cultural values that goes from elders to the younger generation. The culture keeps on changing with time. We need to understand that culture is human-made, not that human is culture-made. If any culture oppresses one gender from birth, it must be changed.

If we have to raise our children, differences must be acknowledged. In patriarchal cultures like ours, gendering starts as early as from childbirth, where the rituals and celebrations are different for boys and girls. Then there exist layers to this gendering over a long period of time until gender norms and roles are learned by children. There are differences in clothing choice, hair-style, choice of toys and games, and even choice in attitudes, behaviors, and morals. 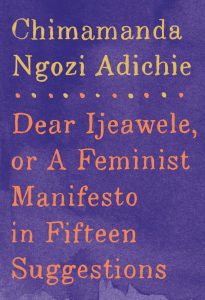 Reading ‘Dear Ijeawele – A Feminist Manifesto in Fifteen Suggestions’ by Chimamanda Ngozi Adichie, will answer your questions about raising your child to be a feminist. Raising your child as a feminist, means, giving them the freedom to question and challenge the patriarchal culture, rituals, norms, values, and stereotypes.

The book talks about raising a female child to be a feminist. However, all the suggestions are equally important for a male child, because not only our daughters but also our sons need to be raised to become feminists. Feminism has no sex or gender, what it stands for is about the social, economic, and political equality of the sexes.

Here, we need to understand first what feminism is and why is it important to raise your child to be a feminist in the 21st century? Feminism is about the social, economic, and political equality of the sexes. Raising your child to be a feminist is crucial because it frees them from gender-based stereotypes and discrimination to provide them a gender-just society to live together without any kind of violence and oppression.

Also, watch this video “Dear Ijeawele” & Raising a Child to Be a Feminist.” It is a small clip of the talk show based on her book. Adichie shares that the book came out from her emails shared with a friend. In this video, Adichie talks about- raising a child to be a feminist, breaking the stereotypes of gender roles and gender norms, the idea of chivalry, and a very important issue of not considering marriage as an achievement for women.

Child-care is the primary responsibility of both the parents

When a child is born, from that day onwards, the child is considered as the primary responsibility of the mother. This creates a lot of stress over the mother and her motherhood. Caring for the child has nothing to do with gender. Care is gender-free. A father is as much responsible for the child care as much the mother is.

Often times what happens is, after childbirth, a woman’s identity gets restricted to being a mother. The same is not expected from the father. Adichie suggests, “Be a full person. Motherhood is a glorious gift, but do not define yourself solely by motherhood. Be a full person. Your child will benefit from that.”

Being a mother does not mean losing out your individual identity. If the child observes their mother as the primary caregiver, they will learn that only a woman is entitled to this work, which hence remains unappreciated. Another important point that Adichie highlights is to reject the language of help from the father. A father does not help the child’s mother in taking care of his child. The child belongs to both and child-care is the primary responsibility of both.

Gender roles are constructed in a way so they maintain the divide between females and males. This division of work and roles as feminine and masculine creates a hierarchy of labor, where what men do remain at the top in the hierarchy, and what women do remains at the lower level of the hierarchy. “Domestic and Care” work till now remains unpaid and unappreciated  because they are considered as women’s work. This all starts from our homes, where our daughters are trained for domestic and care work from an early age, and our sons are trained to be only breadwinners and protectors of the family.

Adichie shares her experience, “I remember being told as a child to ‘bend down properly while sweeping, like a girl’. Which meant that sweeping was about being female. I wish I had been told simply, ‘bend down and sweep properly because you’ll clean the floor better’. And I wish my brothers had been told the same.”

An essential house chore like cleaning becomes gendered when we attach it with the gender. Cleaning, cooking, washing, and taking care of family is not biologically installed in any of us, it must be learned and all these essential chores should be learned free from gender-bias.

The role of language

The language in which to talk to your child plays a crucial role. One has to be very careful and to reject the vocabulary of ‘allow.’ When you allow someone to do something, this shows that you have power over that person. In our patriarchal culture, this power remains in the hands of men. A man allowing her wife to work outside the home is problematic, because in a marriage who expects equality, but if you reverse the gender in the statement, is it a norm in our society?

Adichie explains, “Language is the repository of our prejudices, our beliefs, our assumptions”. How we use the language has the power to include or exclude a group. While talking to your child, you have to decide for yourself the things that you what you will say. Do not say to your child that girls do not get angry or too ambitious. Will you say these things to your son?

I am a postgraduate in Education with a specialization in Early Childhood Care and Education,