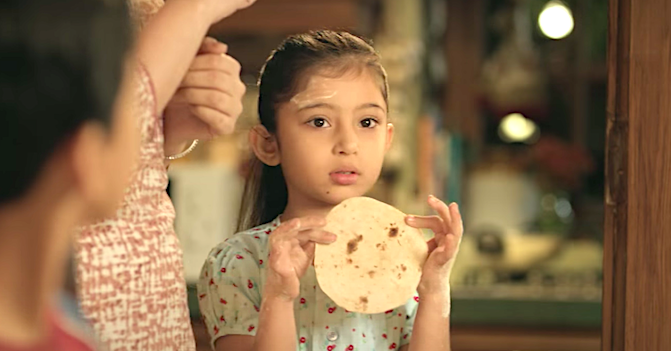 My 7 yo. Self Would’ve Never Expected It But Today, I Knead Dough Like Maa…

‘How’d you do that maaaa? They’re beautiful! How does it bloat up into a ball like that? Doesn’t the fire hurt you when you’re not using a chimta!?’

I had been missing Ma ever since the vacations began. And with the lockdown, our excited plans to visit her, were indefinitely postponed. As I ran my fingers through the soft flour I was kneading, my mind took me back to another summer. The summer of years ago…

I had been watching my mother in awe for the past fifteen minutes. She kneaded the dough and was making chapatis. I was amazed not just by her speed and efficiency but the fluidity of her movements, it was like watching a symphony.

It was all so seamless

It was about the seamless movement of the chapati from Ma’s chakla to her tava to the fire and then to the roti ka dabba… And there were always two or more chapatis, as work in progress, at a time. When she’d place the chapati on the fire, she’d immediately place a new chapati on the empty tava.

‘The tava is hot, so it can cook even if it’s not on fire right now,’ she would tell me, her rapt audience of one. I deeply respected how with her efficiency she ensured that not a second of time or even a bit of gas were wasted.

I told Ma that I also wanted to make chapatis.‘

‘You are very young beta, I’ll teach you when you grow up.’ I was just seven-years-old.

‘But mumma I want to!’ I begged, so Ma smiled at me and nodded an okay.

I was thrilled and told her I’d do it ‘all on my own.’ She agreed with a smile. And so, with an urgency I pulled out a small plate and put 4 spoons of flour on it and added some water. I stood in the middle of the small kitchen, bent over the plate that I held with my left hand and kneaded with my right.

And I made a mess!

Within minutes I had flour on my hands, on my frock and some had sprinkled on the floor but I had been so careful. And my flour was a wet lumpy mush. With tears in eyes I settled myself on a small stool lying on the floor and exclaimed, ‘But it looked so easy when you did it.’

Ma turned around, smiled and celebrated the mush that I had created. As she wiped my tears, she gave me a warm hug and said ‘this is lovely.’ Then, like magic, she kneaded it into a nice ball too. I was immediately happy, I hadn’t wasted anaaj, something Ma taught us never to do.

But  I was eager to learn, so Ma relented and taught me a few years later. After that, for the years that followed I faced a whirlwind of exams, board exams, then various entrance exams, work and marriage. It was finally at my new home that I  got to relish the joy of watching my chapatis swell into a ball, and I did so with thrilled pride of a new homemaker.

I wasn’t as efficient as mom, though. Far from it! There was no symphony like efficiency or grace to my work yet. Sometimes I even had to turn off the gas, as rolling a roti would take too long and the tava would start burning! Daily SOS phone calls to Ma asking her what to do were quite helpful and over time I did manage to work almost like her. And those days I felt extra close to Ma.

Everything went fine, until

Some years later I hired a cook and over time as my other responsibilities increased, she took over most of the cooking. Everything went perfectly… all the way till the lockdown.

And by then, I was out of practice.

I touched the flour gently with my fingertips hoping the sensation would trigger memories of the art, acquired so loving many-many years ago. But nothing came to me. How much water to add? The right way to knead? Nothing. All that I could recall were mom’s  concluding lines, ‘… and when you’re done, both your hand and the paraat must be clean. That’s when you know you’ve kneaded the flour the right way.’

I sulked as I removed chunks of sticky flour from my fingers and palms with a help of a knife. And considered calling up mom and asking her what to do. But at the last moment, I decided against it. I did that mostly as my brother (who is much younger to me) had already whatsapped pics of his delicious round chapatis in our family group! So I soldiered on alone. It took time but I somehow managed. My wonderful family ate them all with love assuring me they were best they’ve had. But I knew they were not and they were nothing like my moms…

Attempt two was almost the same, the magic didn’t happen. I wished roti-making was like cycling or swimming that just instinctively came back to one, even after years. No muscle memory came to my rescue me. Feeling a bit low now, I trudged on.

And things finally looked up!

Things changed by the third attempt. Somehow it felt like the flour was ready as soon as I started kneading it. I looked at my fingers and at the paraat, they were spotless too. What just happened? There was some muscle memory after all. It just needed a few days to kick in!

Invigorated, I carefully made small balls and rolled them all out and then began cooking them one by one. Each chapati swelled into cute white ball one after the other, as if encouraging me and cheering me to carry on. I couldn’t stop smiling.

That was a few weeks ago, now my hand is almost set, (though I am still nowhere close to Ma’s expertise) I called up Ma eventually, to ask her for her special tips. Patiently she had shared them with me, just like she had so many times before. And like always it had made a huge difference. There really is no substitute for years of practice and labour.

A few days ago, when I was making chapatis I saw my two children standing around me. They looked wide eyed and rapt!

‘How’d you do that maaaa? They’re beautiful! How does it bloat up into a ball like that? Doesn’t the fire hurt you when you’re not using a chimta!?’ When I smiled at them, they recognised the emotion in my eyes and gave me tight hugs.

The lockdown keeps getting extended. And even if it doesn’t I don’t know when I will get to meet my Ma next. But as I experienced this sweet déjà vu, it took me back into the little kitchen from my childhood, where Ma wiped my tears and gave me a comforting hug. And for that brief and magical moment, I was with Ma again. 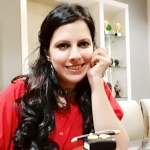 Former CEO and Editor of a web portal, Aarti is currently columnist at the esteemed

Sisters That Sweat Together, Stay Together!