The Best Cook – There Is More To A Woman Than Just Being A Great Cook!

Right from her second birthday, she was told that her place was in the kitchen. Is a woman's place only in the kitchen? Does she have no other identity? 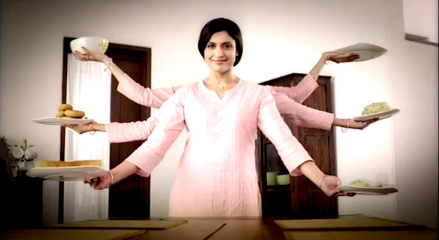 Right from her second birthday, she was told that her place was in the kitchen. Is a woman’s place only in the kitchen? Does she have no other identity?

Second birthday – “What wonderful presents she has received!” Ma exclaimed. “Yes! The best part is the cooking set. Let me set it up tonight so that she can play with it tomorrow.” Baba decided. “Yes yes. That’s the best part of having a girl.” Ma agreed.

After the child slept off, the parents sat that night installing the expensive kitchen set. They imagined their child’s reaction the next day when she woke up. “It would be fun to see her jump in glee and the possible experiments that would follow.”

“Bitiya, come here. Meet uncle and aunty,” beckoned Baba. “Here…this is my daughter. She is only five but cooks up a storm in her little kitchen. Beta, show them what you made today.” Bitiya ran out and fetched the delicacies that she had made. Showing them her toys, she explained how she has planned the meals and collected the ingredients.

Dadi passed away after a prolonged period of illness. Relatives from everywhere joined them during the mourning. “Arrey what is this? You are making your daughter sit idle. At her age, we knew how to make chapattis and tea. Get her involved. A woman’s place is in the kitchen. No matter how educated she is.” This marked the commencement of her real training in the kitchen. The age of toys and fun was over.

Ma fell sick. Her board exams were looming overhead. Expenses were mounting up. Life changed. While her brother continued with his life the way it was, hers changed overnight. She learnt to balance her chores in the kitchen along with her preparations for exam.

The prospective groom and his parents came to meet them. They had seen her during a family function. Her looks and her family background made her a suitable candidate for the recently-returned man from US.

She was only asked if she could cook

“Can you cook?” The mother-in-law queried. She nodded. Her mother rattled off a detailed account of all the items her daughter could cook. No mention was made of her academic record or her brilliance.

Married, the girl stepped into her parents-in-law’s house. The house was teeming with relatives and guests. Mother-in-law declared that lunch would be a feast for all. And it would be prepared by the brand new daughter-in-law who had come highly recommended by her mother.

The hassled girl put up a brave face in the strange house. Cooking for fifty people was no mean feat. The verdict was soon passed. Yes, the new bahurani was indeed a good cook. They complimented her mother-in-law for her great selection.

Was her efficiency in the kitchen her identity?

Soon, the husband was transferred to another location. The girl moved with him. He decided to show off his new home to his colleagues. What followed was a grand dinner cooked by his wife. That night the husband embraced her filled with love and pride. “Thank you my dear. You have once again proved how efficient you are in the kitchen. “

For a mother of two, planning and cooking features an important chore in her life. The children return from school everyday ecstatic. “You know mamma, everyone waits for me to open my Tiffin box. They say that you are the best. None of the mommies cook like you.” She hugged them back. But something was amiss.

The weekly ladies gathering in their housing society is an event everyone looks forward to. The women cook up delicacies in their kitchen and have a grand potluck party. She is aware that none of them like to cook regularly. It’s a dreaded chore. But they won’t reveal it. ‘Because if you can’t cook, you have failed as a woman.

Was cooking her ONLY responsibility?

You can cook. Or you cannot cook. This has always been the standard criterion to judge her and other women like her. Her qualifications have never been evaluated the way her culinary skills have been. It has always been taken for granted that she has to learn to cook and that it’s her sole responsibility.

She looked back at the important milestones.

Second birthday. Her first toys could have been different. A doctor set, probably?

Five years old. Her parents could have boasted about her dance performances. But they preferred to showcase her culinary experiments in the kitchen.

She would have liked to know more about her husband’s skills in the kitchen and his contribution. But that was not meant to be asked.

She wished to have more of an identity

The grand fare presented by the new bride was nothing short of the ragging sessions she had faced at college.

She wished her husband had introduced her to his friends as the person she was -warm and affectionate, highly educated and with a plush job. Not just a wife who had slogged for hours to present a great delicious meal. .

She wished her children saw more to their mother than a woman who made excellent tiff in.

She wished that the display of culinary skills was secondary in their ladies meet! Food would be integral. Oh. If only they used the collective power for a greater good.