Is Male Entitlement A Result Of The Fault In Our Traditions?

It makes me wonder just how convoluted and disgusting the mentality of Indian boys is becoming. Isn't it time we asked ourselves who is to blame for this?

It makes me wonder just how convoluted and disgusting the mentality of Indian boys is becoming. Isn’t it time we asked ourselves who is to blame for this?

Before we begin, I would like to give a quick heads-up that this article talks about the general Indian society that believes boys are more privileged than girls. This article does not target those exceptional men (some that I know of) who continue to have high moral values in this skewed world. In fact, I would like to give kudos to those few exceptional men and their families for raising them fair and right!

Her mom replies, “Tere bhai ko khud apne kapdon ka pata nahi hai, vo humari kitchen me help kya karega? Ulta humara kaam badha dega” (Your brother barely knows his own clothes. How will he help us in the kitchen? He will only increase our work)

This reply, given by several Indian mothers, may seem harmless, but might just end up being fatal in the long run. The sentence merely goes on to show how the boys are privileged. This sets the tone of how a boy will be raised and how different will both their upbringing be.

Why should a daughter and a son be treated differently?

I detest the idea of raising a daughter and a son differently. It is hard for me to comprehend why a teenage girl is taught and expected to take care of her house when her parents are away. Meanwhile, the sons are not burdened by this expectation even if they are older.

Why is it the daughter and eventually mother’s responsibility to do the laundry, the dishes, clean house, and cook food? Who tells daughters to be responsible and the boys to behave like a whining babies all the time? Shouldn’t they both cook together when they feel hungry? Or share the laundry load if they want to wear clean clothes?

This constant care and the excessive ‘motherliness of mothers’ towards their sons gets them so dependent on moms that they can barely look after themselves! First, they are looked after by their moms then, by their wives.

And soon, this becomes a habit, they start taking it for granted and believe that looking after themselves and the house is not their responsibility at all. Now imagine a hypothetical situation where the man and his wife are living alone. Unfortunately, the wife is sick and bedridden. How is he going to feed himself and his wife? Who will look after the house? Are they going to be dependent on their neighbours?

First step is to accept the problem

So, what is this thing that tells men and women about their basic responsibilities? This is the idea, the mentality, our family teaches us or the society imposes on us. Clearly, it is not a stamp with which we are born, this is something we adapt while growing up and this needs to be fixed.

This mentality of banishing boys from house responsibilities at an early age gives rise to their false notion of assumed importance later in life. Kids need to be shown how things are done as they imitate elders.

The ignorance of domestic violence

Domestic violence is a menace to Indian society but sadly it is still quite rampant. What is unfortunate is that in India (at least in rural parts) rather than teaching boys the right values, girls are taught to adjust to minor atrocities.

You should pause and ponder over how wrong is this and just on how many different levels. These girls, when they become mothers might teach the same thing to their children. And thus the cycle of abuse will continue as it has for so many generations.

Parents teach their daughters to be restrictive in her choices, dreams, words, her posture while sitting, manners, and social conduct. But the same parents allow boys to be whoever they want to be. This whole concept is wrong to the core.

Teach both the girls and the boys the same values so they grow up to obedient and free.

As parents, friends and family, we should make a big deal out of any domestic violence incident and no incident should go unpunished.

The taboo of sex education

Recent Bois Locker Room’ incident got me thinking about the need for sex education in Indian society. The perpetrators of this immoral act are teen boys who come from wealthy households. This makes it all the more alarming.

It makes me wonder just how convoluted and disgusting the mentality of Indian boys is becoming. Isn’t it time we asked ourselves who is to blame for this? And isn’t it the fault in our traditions?

It is understandable that kids and teen develop curiosities about another gender. What is not understandable is the rush of Indian society to suppress the topic.

Similarly, why are girls brought up to not talk about their menstrual cycle to anyone? Isn’t it natural? Hasn’t it been happening to almost half the human population? Why we create a big fuss about it?

We should teach girls to ask and talk openly about this naturally occurring phenomenon. At the same time, we should teach boys to respect, care, and be gentle towards girls, not just during her periods but all the time.

We need to give our children the right sexual education. If we don’t, their curious minds will end up getting the wrong information from other sources in this age of information.

The confusion of morality and clothes

As an inherently patriarchal society, we are way too judgmental and concerned about the choice of clothes worn by women. There have been incidents where a girl’s clothes are blamed for a number of things, including abuse. What is shocking and sad is even women complain about clothes worn by girls. Indian society needs to understand that choice of clothes lies with the individual and obscenity lies in the eyes of the viewer.

In the end, while Indian tradition is beautiful at times it is not fair towards women. Or is it that our understanding of Indian values has made it partial for women?

We can improve but we need to be aware that we lack something. Traditions don’t have to be right, just because they are old. As intelligent beings, we must question the immoral practices and call them out at the right time to stop them from being passed on. I believe this is the right time to get rid of the above-mentioned faults in our traditions. 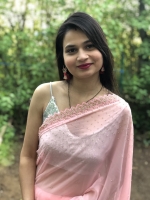 I am a post-doc scholar with a PhD degree in physical chemistry. I come from Agra, India and currently working in Germany. My hobbies are travelling, writing and creative crafting and I try to read more...