A mother and child are so closely connected to each other, that superficial acts of sacrifice are not needed to bind them. Dear Mom, it's okay to think of yourself too.

A mother and child are so closely connected to each other, that superficial acts of sacrifice are not needed to bind them. Dear Mom, it’s okay to think of yourself too.

Being a mother is one of the most precious blessings life offers; yet, unarguably it has a flip side to it.

As soon as you get pregnant, people around you and society at large puts you in an exalted position which becomes a burden after sometime, even if you enjoy it initially.

Suddenly, sexual activity – considered a taboo, sin or indulgence – becomes something pious and sacred. And women who would give you judgemental looks now want to talk about the details about how and when ‘it’ happened. Baffling!

Then comes the postpartum period. Now, if you have given birth through a C-section surgery, you are in for a bigger shock. I am not saying that natural birthing is easy – NO WAY! But, in a C-Section of the emergency kind, you are sedated and when you wake up you are a ‘Mom’. It’s overwhelming and too much to take in. (This is the least I can say in this article, I hope to share more more in the next.)

It took me two months to adjust to my new maternal reality even though I had a happy pregnancy and was very attached to my infant; in fact, I adored my magical angel.

This article is about what happens after that. As you take in the fact that you are a Mother, lots of sacrificial stories are either fed to you or you remember that you have heard them before. You suddenly become the gives-it-all and needs-nothing-for herself person. Actually, that is expected from you and in the beginning, one gives in.

While shopping, you shop for your child. You tell your husband or in-laws or even yourself, ‘I am buying for chotu’. When eating out, you eat for your child because you are feeding them. You justify it to everyone. Only then can you eat to your mental and physical satisfaction, which also caters to your cravings.

While going out you choose places that are child-friendly. Your dresses are child friendly – you know what I mean.

All that is fine, and no mother feels bad about doing it. But the fact that one has to justify every action to those around you is irritating. Because she is a mother, it is expected that she will only want things for her child and not herself. Why?

Pregnancy is the ultimate sacrifice

The new mother or even someone having a second or third child, has already devoted her mind, body, emotions, career, dreams, future, likes and expectations, to name a few, for the little being she is growing inside her, so after the birth of the baby, why can’t she be ‘herself’ again?

Why put her in a cage of piety and trap her forever in it? Why expect her to put others first and herself second or third or fourth? What kind of piety is this?

Mothers are expected to feed their children and husbands and family first and eat in the end. Because they are mothers – sacrificing, caring, sacred and superior to everyone.

Mothers are expected to leave their little joys of having tea or coffee alone and first serve others and give company to all.

Mothers should socialise for their children, so that they have more friends.

Mothers should choose jobs which suit their children’s needs. Or even simpler, don’t work at all (but then you are looked down upon too).

Mothers have to put their child and family first no matter what, ‘Because She Is A Mother.’

Mothers are human beings too!

No child, no one, would like to learn as a grown-up that because of them their mother was royally inconvenienced. Moms will never tell you but if we got to know, we would curse ourselves.

Children upon hearing tales of their birth when they gave such trouble to their moms, squirm in their heads and feel guilty. A mother and child are so closely connected to each other, they were one body before delivery, that superficial acts of sacrifice and atonement are not needed to bind them.

Eating before feeding your child, quietly having your tea or snacks, hiding a chocolate bar from your toddler (for fear of their teeth decaying!) and having it alone, sometimes shopping for yourself only, choosing a job or a career path because you like it and meeting your friends often is not selfish.

Mothers are human beings and not Goddesses or some divine beings. They need gratifications, enjoyment and happiness to stay alive. Don’t push them onto a pedestal where they continue to balance themselves for the rest of their lives.

They are their parents’ little girls who are now new moms.

Older women as well as the society around them should not push them towards divinity but let them be themselves with their little bundles of joy – in short, just let them be. Their children would be happy to see them smile and later, be proud of themselves.

Image is a screengrab from the Hindi movie Amar Prem 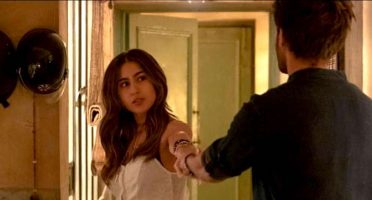 Why Should Boys Have All The Fun? Go On Girls, Make That First Move!