The Pain Of Long Distance Relationships Is Often Measured In Tears, Not Distance

The pain of long distance relationships rises when both partners are unable to fully understand and communicate with each other.

The pain of long distance relationships rises when both partners are unable to fully understand and communicate with each other.

Every individual has their own perceptions of marriage. Some want to first fall in love and then get married, while some want to know the feel of love and being loved by someone only after marriage. However, the ultimate thing we need in a marriage is of having that one person of our life with whom we can share our pain, who can understand us, whom we can trust and most importantly, who will be beside us at all difficult situations.

When a relationship faces a geographical separation, it becomes difficult to handle it, especially when one of them is not willing to move. And in such situations, with an increase in distance between two, chances of misunderstandings increases.

I remember the days when my father stayed away from us for his profession, and my brother chose to move to a different country for his studies. I had missed their presence but my relationship as a daughter and sister never felt weak or disturbed the way it felt in just one year of married life, and that too just after having a baby.  This was the time when as a first time mother, I needed my husband’s support both physically and mentally. I also wanted to cherish the moments together by watching the baby growing-up.

Circumstances forced us to stay away from each other

When we are not ready for such a situation, it’s quite a difficult task. Even if we already had a vision of such a situation which would last for a few months, what makes it worse is that the few months turn into many months and then into a year.

There are people who think that a relationship between two people will not be affected just because they are far away, and that in fact it should just get stronger. But that’s only when both understand and support each other at all times though staying apart, and when we individually receive proper support from our family and when people around us respect our thoughts. When we start giving justifications for all our needs and thoughts, the relationship just weakens.

When one makes a promise of taking responsibility equally, promises to take care of you at all situation, promises to be there with you all the time but then never turns up to fulfil any of those promises, we just end up losing trust in them. It becomes difficult to believe them again. And in a relationship, trust and belief should never go missing.

In a long distance relationship, more than words, tears speak about our pain.

I am a daughter, a sister, a wife, a daughter in law and a mother. Meantime just trying to find "myself" who got lost in playing these roles. read more... 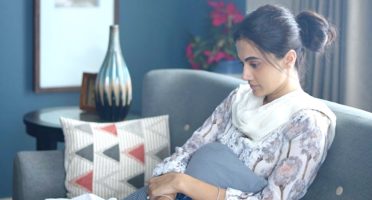 I See The Pain Of Broken Promises Every Time I Look In The Mirror!