The Blue Door: A Memory Of A Dark Night With A Tiny Light

On a day that turned into a horror, a woman discovers humanity in a barren land. But will there be a happy ending?

I stared into the maniacal eyes of the person looming over me. Out of the thousands of random thoughts screaming in my mind, the most hysterical one was that of whether to fight or take flight.

I tried hard to break out of the shock and move my damn limbs…as if in a bad dream, unable to even flinch, and hoping a jerk would shatter the scary scene and bring me back to the cozy safety of my home.

It was not to be. The cold darkness did not go away. The numbness and shrill voices took over and as if my consciousness left the body in dire need of an escape…I passed out.

I do not remember what happened in the hours, days and months after that night.

Before that, it had been a usual random day. The day in the life of any middle class working person, well aware that the world is not concerned with her existence. Nothing changes, you live or not, think or not. I do remember shunning the blaring news channels that drummed up the existing crisis over religion and protests cropping up everywhere. I also remember feeling exasperated at the remarks from my father, nodding with the pro-government news anchor – let there be a riot, only then these people will learn! I wondered who “these people” were and what needed to be taught. But, I kept silent as a good girl does.

I am good at it. I keep my silence.

Even if I wish to scream and tell people around me to shut up and mind their own business, I keep silent.

When the madness erupted

So that was one of such days, which you won’t count as being of any merit to be remembered later. It changed with the sunset. The day turned into a very dark night. There was hush hush talk in the office cafeteria, corridors and desks. People eyed each other suspiciously. A sense of unease hung in the air.

I had tried ignoring the chaos and immersed myself in the randomness of my work. But by the time I started for home, things had gone pretty bad in this otherwise peaceful city of ours. The roads were filled with mobs moving like swarms of flies, carrying weapons of all kinds. Trembling with fear I raced to my car, trying to escape the madness as soon as possible.

Suddenly a loud thud on the windscreen made me jump and swerve. A stone had landed and shattered the glass and spread fear all around me. I flinched and just took the sharp left into an unknown and deserted road. Speeding like an animal being chased by hunters. I just hoped to flee the madness.

It was a deserted bumpy stretch, no lights too. I had no idea if there was a way out of this that would lead me to home. Frantically, I searched for the GPS on my mobile. And yes, there was no network too. The day truly turned horrific by the end. Nothing worse could happen now, I thought.

And then my rear tyre just gave way, and with a jerk the car screeched to the side of the road. There was nothing around but vast stretches of barren land strewn with rocks. I remembered God at this very precise moment. Hoping for him to just arrive and rescue me.

After waiting inside my car for God knows how much time, since that seemed the only safe option at that time, I frantically tried to look around and find any signs of human habitation. A faint light caught my eyes.

Weighing my options, and deciding to venture out finally, I stumbled out and slowly made my way towards it. As I neared the light, I realized it was a small house out of nowhere. The only remarkable thing in that house was the friendly wood fire smoke mixed with the smell of food arising from the kitchen and a brightly painted blue door. I stood there by the side, trying to think rationally what to do next. Fear gripped me by the core and any thought that came at that moment was hazy.

Suddenly, I heard faint voices coming from the distance. Unable to judge what to do, I strained to hear. Obviously it was another mob moving in my direction. Suddenly I was startled by the hint of a shadow appearing just near me out of the darkness. Before I could understand what happened, a bulky figure just pulled my hand and shoved me towards the empty lands. I tried to scream but only a faint squeak came out of the horror. And then this man pinned me down with force, shutting my mouth with an iron gripped palm.

That was when I passed out.

Did I want to remember?

My next memory is from the hospital. I found myself lying on the bed with a drip attached to an arm in plaster. A clock ticking time on the wall opposite. A beige curtain pulled across glass window. A trapped butterfly fluttering in a vain effort to escape. I took a deep breath and slipped into another slumber, not willing to wake up or try to find out anything.

After my return from the hospital, I hardly asked anything from my family, I had lost the will to know. I could see that not much had broken from that night. Nothing that could not heal. But the fear had not left my mind, it remained there, coiled.

And then one day my mother held my hand and whispered tenderly. She ran her fingers through my hair. Touched my forehead as if to check the temperature. “You are lucky to be alive”. I kept silent. I am good at it. “If not for that man, we would have lost you that day, so many have died”.

I just looked at her. She seemed translucent, like I could see through her and beyond. Then I slowly repeated her words in my mind. And the question finally arose and appeared in my frown.

She read the question. She explained that someone had saved my life that night by hiding me from the rioting crowd.

I had to return to that place again. After a few days. To join the pieces of the fragmented memory. To find someone in the hope of expressing my gratitude.

The house was there for sure, as well as the blue door. But the charred remains of the walls and windows stood in melancholy. “All of them perished”, a bystander remarked. “It was a good family, the kids were adorable… but no one survived.. it was too late by the time police came…”

I kept silent and shed a tear. 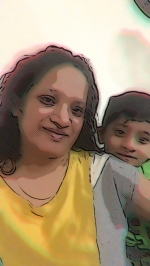 Saras values free will and respect of everyone. She is in search of the truth

As I Flip Through Maa’s Art, I Wonder If Her Drawings Were The Red Herring…

Thanks, But No Thanks : A Birthday Letter To My Ex

5 Crazy Things I Do For Raising A Reader At Home