My experience as a committee member of the society I reside at in Haryana drove me to begin a petition to begin gender sensitisation in schools.

My experience as a committee member of the society I reside at in Haryana drove me to begin a petition to begin gender sensitisation in schools.

I bought a flat in Haryana 8 years ago, I moved in 3 years back, and within 2 years of residence, I signed up to fight for RWA society elections.

I was the first woman in my society to win an election, and thought this will lead to more participation of women in society affairs, more harmony, and more democratic ways of functioning.

A year after this win, I am still grappling with two fundamental issues, one relating to control and ego, and the other is gender bias.

Both of these are most effectively countered by gender sensitization, which is why I have started a campaign on change.org, asking the government to make this training compulsory for all teachers of Haryana. My end objective is to eliminate all gender barriers through a community-led movement.

Society politics is a nasty game, because those who win elections need to balance power and control with accountability, those who lose can simply adopt every single mean trick in the book just to ensure that they justify their relevance and keep their flock together.

So, every trick in the book is tried which includes avoiding paying of dues, creating ruckus, flouting rules, picking up fights and getting personal.

I am told that this plays out in every society and going to police stations is passé. I have been to 4 in the last one year and even the police seemed totally disgusted. There have been umpteen times that the police vehicle has visited the society, it’s’ totally commonplace.

To top it all, society meetings are more like battles between two opposing armies instead of healthy professional discussions.

I haven’t heard too much conversation about water harvesting, waste segregation, pollution in the environment etc. It’s just been conversation about who is doing what, is which camp follower, and generally a whole lot of noise on… well just noise –  all of which emanates from control and ego.

Women members are talked over

The second challenge I had to face was countering the subconscious belief that women are just rubber stamps.

Women are just about as competent as anyone else and asking questions, commenting, disagreeing, insisting is as much their right as anyone else. They have an opinion, a way of doing things which can be radically different in approach. Further being inclusive and participatory is not necessarily something which is defeatist, inefficient or just plain impractical.

Power to women may signal more participation, which otherwise in male-dominated structures implies only control. It still feels that women must take permission to do things, while men can just take a decision and expect others to honor it.

Also, people need to understand that listening and being polite can probably be more superior to getting even and always being right.

I have been at it, not at all controlling my mind, my tongue, my opinions, and just being there has made a quantum of difference.

A year later, my colleagues respect me for what I am, even when I am at my critical best. They now understand that although I never shy away from saying what I feel, I am there when the chips are down. I am not interested in usurping power and control; I am just interested in sharing it with everyone. In a way, even the society sees that I also do not back down when it comes to the fundamental question of standing up for a women’s right to dignity of her position and capability. They also understand that peace can be an alternate path and it just might lead to more sharing and happiness.

Proves the need for gender sensitisation

Very frankly, all this stress and infighting might have just not happened, if only we had more gender sensitization training right from schools and colleges.

The younger ones are much better at taking feedback from women because they are more exposed to gender sensitisation, the older ones are still stuck in their grooves where it has been ingrained that women are second citizens.

Imagine, if the entire society had got more exposed, not only it would have led to more gender balance in our community governance structures, it probably would have led to more discussion on real development challenges that face our society like food, education, environment, health, safety, senior citizen welfare and the list is long.

Author bio: This blog has been written by Dr. Vinti Agarwal, a Changemaker from the She Creates Change programme of Change.org. You can support her campaign by visiting www.change.org/haryanagendertraining. She is also an RWA member, who runs a research-focused social entrepreneur firm called Citizen Ecofinalytics. She can be contacted at [email protected] 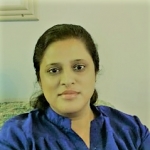