She had trained herself to cope on a day by day basis. And keep going. Until one day, when she realized she was burying herself into a hole, deeper and deeper, with each day; with acceptance of his increasingly bad behavior.

The second winner of our July 2019 Muse of the Month contest is kalluxyz.

‘He says he will take you back. He will come for the wedding’.

Her brother is talking, but she is barely listening.

She is thinking of the past. The verbal abuse. The taunts that rained down constantly. Why is your blouse so low? Why so much makeup? Which guy are you planning to meet?

The suspicions when she worked late. The constant calls. ‘Where are you? Your daughter is at home alone and you are gallivanting somewhere’.

She remembers how her shoulders would tense automatically when he was in the same room. She had learned to keep things to herself and share information only when needed.

She had trained herself to cope on a day by day basis. And keep going. Until one day, when she realized she was burying herself into a hole, deeper and deeper, with each day; with acceptance of his increasingly bad behavior.

The more you bow, the more will be heaped on your head. You become a willing victim. She understood the saying completely then.

Pavithra remembers the day in excruciating detail. She was very very excited that day. She was chairing a special session, part of a national conference, and it was an honour to be invited. There were so many distinguished people in the audience. She had been practicing her address for a month. And she had to look very special. She had zoned in on her rust colored saree in a soft silk which would drape well and wouldn’t look too flashy but dignified. And the colour suited her. She had a new blouse specially tailored in the latest style and had borrowed a simple set of earrings from Vasantha, for the occasion.

She had risen early to wash her hair and let it dry and get ready quickly. She had been simmering with excitement for a week, but had tried to suppress it; from past experience she knew it would lead to bad things. But she hadn’t suppressed it enough, it seemed. When she came out of the kitchen, she found the saree, wet and sodden, lying on the floor.

She stood, wide eyed in shock, her hand covering her mouth for a whole minute, as the tears rushed in and her chest heaved.

‘What happened? How could you do this? You know I have to get ready and go. You knew I was going to wear this?’ she asked him.

‘How do I know? It might have fallen into the water. You must have left it in the bathroom?’ he said.

‘Why are you yelling? Just wear something else. If you don’t want to, don’t go. What’s the big deal in a conference?’ he said, casually and went back to the newspaper.

It took a while for Pavithra to stop crying. Bitterly, she chose another saree, got dressed. He watched sardonically as she left without a word. Although she stayed silent for a week, he never referred to the incident, sometimes cracking jokes about foolish people who organized conferences and got more foolish people to address them. Her daughter listened in silence. She too had learnt not to provoke him.

And now her brother was talking.

‘Yes’, he says. ‘He is willing to live with you. He will stay here and conduct the wedding.’

‘How magnanimous of him! So the price of having her father at my daughter’s wedding is… I have to live with that man?’ she asks.

‘Yes,’ says her brother. ‘Pavithra, think about it. It is good for you too. In your last years, you won’t be alone. And people won’t talk so much at the wedding’.

‘As if they haven’t been talking all these years’, she thinks.

‘You mean he doesn’t want to be alone?’ she asks. ’Yes,’ her brother said. ‘That too. But think of how it will help you. After Sithara goes, you will be alone’.

How can you forget, she thinks. All those miserable years. When I had to strive to go to my job; come and meet you and mom secretly; all those years when there was never any peace.

I have been alone for so many years. I’ve faced so many problems and learnt to solve them on my own. I had to work hard to keep my job and earn the respect of my colleagues and students. I had to keep the house running and be responsible for my daughter. I’ve grown in so many ways.

I earn just as much as the men in my department. Some of them are divorced or widowed. Yet, none of them carry the stigma I do. Separated.

And now, for my daughter’s sake, should I do this?

No, she thinks. For my daughter’s sake, I should not. I have to create this path. I have to show her. Do not take any nonsense from any man. Husband, father, son, boyfriend, brother, colleague. Or boss.

I’ve tried to teach her to hold her head high. Laugh loudly. Be her own self.  Solve her own problems. Go wherever she has to go. Not judge people quickly. Who knows what they are suffering silently?

I brought up Sithara like a princess. Isn’t she the daughter of a Queen?

‘He can come and attend the wedding like any other guest, if he wants’. 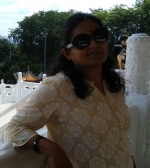