Maybe Her Daughters Kept Her Strong Through It

We loved the way she laughed. Her laughter was open. And loud. And clear. And without any hint of the dreariness that her lay before them.

We loved the way she laughed. Her laughter was open. And loud. And clear. And without any hint of the dreariness that her lay before them.

The writing cue for June 2019 is these lines from Indian-born Canadian spoken word and Instagram poet Rupi Kaur, whose poetry is some of the most quoted in recent times. Check out the lines here.
“what is the greatest a woman should learn
that since day one
she’s already had everything she needs within herself
it’s the world that convinced her she did not”

The second winner of our June 2019 Muse of the Month contest is Sona Singh.

Maybe Her Daughters Kept Her Strong Through It

Ensconced in the blanket while the temperature reaches another low, I feel guilty thinking of her. That nag of a woman, Manju, reminded me of the witch Sycorax, a character from The Tempest, which I read in school.

Struck with polio at an early age, she had a limp and perhaps that is the reason they got her married to a rickshaw puller, an alcholic and an addict, who later abandoned her and the two girls he had helped procreate. I have no clear memory of how I met Manju, just that she used to sell tea at the roadside near my grandparent’s house and slept on the terrace of our house in Patna.

People called her various names, but I thought that nag suited her just fine, because that was what she did best, nagging at her daughters, even the customers — rickshaw pullers — most of whom never returned after facing the brunt of her wrath, laced with misplaced anger at the husband, the no-gooder. Many complained that she had a dark tongue and that if she cursed you, it was bound to come true.

I have visions of Manju, sitting on the roadside all afternoon, waiting and hoping that customers would turn up and that she would make a profit. Sometimes, during a free moment, you could also see her teaching her daughters the nuances of English or whatever subject caught her fancy that day. For Manju was a matriculate, said Gudia, the elder daughter with pride. Being a matriculate and a person with disability would get her a job one day she hoped, and bring an end to their misery.

Gudiya would sometimes come to our house to press my grandmother’s feet and was not liked by the servants. For they were fed up with her stories about the alcoholic father or perhaps misliked her for reasons best known to servants themselves. Perhaps, it was because of the extra chapattis that Bipin, the domestic help, would have to make if she came to work for my grandmother, did he not like her.

Some days, Gudia would turn up and greet us aloud, insisting we open up the door for her to enter. Later, whilst pressing my grandmother’s feet, we would come to know that Manju had cooked nothing today because there was no money for kerosene and vegetables. When she left, she would be given the leftovers of the day, the extra food that found no takers among us. Sometimes, she would ask for achaar, another day for some extra rice because Gudiya had not only herself and her mother to feed, but also her younger sister.

I do not remember what the younger sister was called. She was so tiny, due to some birth defect, they said. When their mother was angry, it was the younger sister that received the beatings. This was because she was slow to run away. There were accounts of how the father had not provided enough food for Manju when she was pregnant, and thus the younger daughter had been born like that.

I have visions of both the sisters, sitting near the entrance of our house and quietly eating, trying to be oblivious to all those tenants who were constantly going up and down the stairs. The younger sister, despite her slow walk, was a delight to my brother and me. We loved the way she laughed. Her laughter was open. And loud. And clear. And without any hint of the dreariness that her lay before them. It was so infectious that we also joined her sometimes and laughed for a good few minutes.

For a few days, Gudia stopped coming to our house. The servants had finally managed to convince my grandmother that she was a thief. They complained that she was stealing cosmetics while cleaning the dresser, her favourite job in the world, and for this she was scolded. She avoided our house for days. But eventually always returned.

All of this, however, is irrelevant. This story is about Manju.

Because they had no place of their own and because by then the father had disappeared from the scene for a long time, Manju and her daughters slept on the terrace of my grandfather’s house. All of their rags were taken out in the evening and spread about. In the mornings, they would be tidily folded and kept back in a corner. This soon became a routine. On hot summer evenings when there was a power cut, we ventured on to the terrace and always found them around.

One cold night, somebody remarked how Manju and her daughters must be managing on the terrace. For that is where they slept, underneath two iron beds (belonging to my grandfather’s clinic) which they tried to drape with blankets to avoid the cold air from gushing in.  After that, every night, I would pray that nothing should happen to them, and would heave a sigh of relief when I saw them alive in the mornings.

Some days, when I forgot to mention them in my prayers, I would be assuaged by guilt. True, people were generous and did donate a few more blankets when they came to know of her plight. But I always wondered if she and her daughters would really die in the cold, like the newborns of my pet rabbit did one winter.

For then, I did not know that life kills us slowly every day. I wonder what it was that helped her go through her penurious existence every day. Perhaps it was her daughters. The sound of laughter coming from her youngest that helped her through the days and nights. Once someone said she was sick. Upon inquiry, Gudia said their father was back and had promised that they would all start living together if this baby was a boy. Manju, however, chose to have an abortion.

Today, I was suddenly reminded of Manju and I said a silent prayer. In the evening, while talking to mum, I asked about Manju and she said that they had moved out long ago. She had a new job at some hospital.

I heaved a sigh of relief! 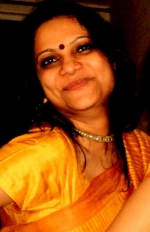