You have a single child, and you’re happy with it. But what do you do of the guilt when people say you’re depriving the child of a sibling, or worse, the child asks for a sibling?

It used to take me long to wipe the guilt off my mind. Whenever someone popped the eternal question about the plan for the next child, I used to shrug it off with some excuses. The guilt was however static for a few days. Have you ever felt so? Like committing a sin to have a single child, just one?

I never thought of a sibling for my girl, being a busy full time working mom. So I never cared to have another. Also, I felt nurturing a child in such a challenging and competitive time is tough, why split attention and increase the challenge? I still feel the same.

People have accused me of snatching sibling love from my girl. And I take that blame wholeheartedly now, after making excuses for many years. If someone used to pop a question like ‘when are you planning to have a second child’ or ‘come on, have one more, it would be good for the child’s development’, I used to make bluffs about time issues, money matters, career challenges, husband’s choice etcetera but not anymore. Some close relatives have even suggested to birth another child and leave them in their custody. I laugh at such naïve comments which defeat the purpose of having another child itself.

What do you need to do then to get rid of this constant guilt?

Smile and prepare to face next blame people are ready to inflict on you. Trust me, a smile kills almost every strain. At times, I simply accompany my smile with ‘we are happy this way’ and move on. People who criticize us, do not like hearing ‘we are happy’ in general.

But the biggest challenge is when your own child asks you, ‘Mumma, why don’t I have a sibling like my friends?’ I look at her face with no answers to soothe her when she says sadly, ‘I wish, I had a younger sister, I would have played with her like a doll.’

The situation gets worse when she asks for a pet if not a sibling.

I don’t want to smile and pass on her questions without resolutions. I always say, “You have me and Papa as playmates. You have your cousins to talk to and cherished friends in school or society.”

Usually, she settles down with my answers and leaves me relaxed for another couple of months. But the question is still there lying in the depth of her mind and maybe heart. Who knows? The best way is to deal with it is lots of love and a bit of tact.

I often ask my own friends who do not have siblings about how they look at this situation, and how was their thought process during their growing phase, especially in early childhood? I often receive a positive answer which calms me down.

And I don’t deny the issues parents may face for having a single child–kid’s obstinacy, loneliness and at times fear of having a spoilt kid. But look at the added positives too when you have decided to have just one child. Your sleepless nights are only for a few years, your finances are better placed, you don’t need to worry so much about their future education and your own career planning is handled fairly. Being ‘only’ makes the child independent too.

People often suggest to me that my girl would not learn about sharing her toys and space. But trust me, she is very good at sharing. She seldom has any tantrum whatsoever when it comes to sharing.

How does she spend time at home then?

She is a very busy girl with so many friends around. Being a good role player is a plus for her, she plays teacher-teacher games and cooking mockups with her toys. These keep her busy. At times, I have to be her student in the class of teddies and dolls, sometimes a customer in her dummy restaurant and often her tourist when she wears the hat of a tourist guide. This happens mostly whenever we are back from a vacation.

Having a single child is not a crime, it is a choice you have made for a reason. Like many other choices you make in life for the career, investments, and marriage, you should be proud of this choice.

Parenting comes with a huge responsibility and if you are not ready for a dual obligation, so be it. Neither will the child grow up as a selfish adult, nor will they be an aloof introvert, at least not “because of being a single child”. My daughter is none of them. Thankfully. Not so far.

What qualities a child will have as an adult is impacted (but not always) by our parenting style and the wisdom we nurture in them. Finally, every child will have their own choices as a grownup which cannot be changed, we as parents only provide the channels. 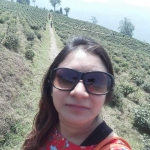 After a decade-and-a-half long IT career, Rashmi switched to professional writing as

Kids WILL Push Your Buttons, And No One Can Be That Fictional Figure: ‘Model’ Mom