“Rohan silently knew he was not on top of his father’s priority list. He wasn’t sure if he even made it to the list. But, kept taking his chances anyway. Laxman would snap at him at the slightest excuse.”

“I have a meeting, didn’t I tell you that? And you’re a big boy. Play with your friends,” Laxman snapped.

He said that to his 10-year-old every day.

Saddened, he waved back his disheveled hair, dangling his petite head in despondency, his brown eyes welled up. Rohan murmured to himself, “Please, not again, dad.”

School wasn’t his thing. Staying in one place would make Rohan restless and almost destructive. He always looked forward to outdoors especially skating downtown near the “fairy-statue.”

Rohan silently knew he was not on top of his father’s priority list. He wasn’t sure if he even made it to the list. But ,kept taking his chances anyway. Laxman would snap at him at the slightest excuse. He was ‘unavailable’ to Radha and Rohan. If it wasn’t traveling, it was his laptop or phone or earphones or car or even his shoes!

Radha always tried to double up as father and mother, she was exhausted and wished only if Laxman sometimes….?? “Never mind,” she said to herself.

Rohan was struggling at school in all subjects, especially Math. Radha pleaded with Laxman with a vein of sarcasm.“It’s time you put your fancy Princeton degree to use, Laxman. Rohan needs help!” Laxman remained unaffected, he always did.

“What is the use? He doesn’t understand anything anyway,” said Laxman mockingly.

“Don’t give up on him just yet Laxman, he’s trying”! said Radha in a concerned tone.

“What the hell is wrong with him? Why can’t he focus?” sneered Laxman. His free-floating frustration with Rohan was mounting by the day while he struggled to pin the blame.

Radha was trying to keep it all together while Rohan was soaking it all up for years, silently. He was reaching a crescendo, but who would know how far it goes.

A strange disquiet gripped the dining area, while everyone ate. As usual, Radha tried to lighten it all up with trivia. Laxman’s responses of ‘hmm’ and ‘ok’ were perfect conversation stoppers. While nuances of social conversations often escaped Rohan, Radha kept at it, almost single-handedly.

It was Sunday again. A bright clear day.

Laxman would work on his laptop, sometimes as a ploy to avoid playing with Rohan. Radha was busy preparing the grand weekend lunch for the family. Rohan would often accompany his mom to the kitchen but then it was Rohan. He’d rather be running outdoors, swimming, rafting down the river than bearing the agony of monotony in the kitchen!

It was past mid-morning and Laxman hadn’t seen him since early morning. It was unusual. He called out to Radha from his room. “Where is Rohan?”, he asked hesitatingly.

Radha was both surprised and glad. She had never seen Laxman this concerned for his son.

“On his skateboard, outside, where else”, she quipped

“Are you sure, Radha?”, he probed, this time with a shade of worry.

“Sure as sun Laxman, anything to run away from work”, she chuckled

“Would be back just in time for pasta and meatballs!”, she looked at the clock on the wooden fence. It was 2.30pm.

Laxman went back to work. He was in his room, quiet and somewhat edgy.

He walked to Rohan’s room. He hadn’t gone there in a long time. He nervously looked around.

There was no Rohan!

Radha laid the table for lunch when she called out to him. There was no response.

With butterflies in his stomach, and head buzzing with possibilities, there was no way on earth Laxman would swallow a bite, let alone a plateful.

He broke into a cold sweat, as he looked over the entire house and neighborhood. He couldn’t find Rohan. It was 3.30pm. Radha was beginning to worry too. Rohan didn’t have too many friends. She called a few he often visited.

Rohan was nowhere to be found.

“This never happens! Good heavens, where could he possibly go?”, she thought

It was 5:00 pm. Radha eyed the telephone with furious glances as if she could bully it into ringing and giving her news. Still, no news was good news, isn’t that what everyone said?

Pacing up and down, he constantly punched one hand into the other.

Radha told Laxman to take the car out. They drove around scanning every nook and cranny of the streets where Rohan played. The drive seemed long. Laxman felt like a part of him wasn’t even there.

“Oh, I know where he likes to skate,” said Radha, clenching her fists. “He will surely be there,” says Laxman confidently.

They zoomed to the central corner downtown where the grand “fairy-statue” stood erect.

Laxman hurriedly parked the car and marched to the corner near the statue. He took a deep breath while he was unable to hold off the flow from his eyes. “Thank God, there he is,” he paced towards Rohan to encircle him in his arms like he had met him after a million years!

Radha swiftly followed Laxman. “Where is he..? Tell me… where is he?”, she wailed.

“Can’t you see him, in my arms?” Only she couldn’t see anyone! 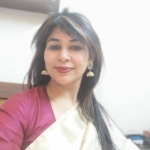