The Maldives is a beautiful place to visit, and when there, snorkelling or scuba diving is a must. Stay safe while you enjoy it, by keeping away from these dangers in the waters of Maldives.

Nestled like a pearl in the Indian Ocean, the beautiful island nation of Maldives is a literal paradise. Made up of coral atolls, this nation boasts some of the most enhancing vistas that a person can see. The beauty of Maldives is not just above the surface, for this nation offers such a wide array of marine life that it is a snorkelers’ and divers’ delight. Anyone who has snorkeled or indulged in scuba or free diving would know that the sport does not come without some hidden dangers. Sure, the underwater world is fascinating! It enchants you and can hold you enthralled. But, whilst engaging in this activity it is prudent to remain cognizant of the many dangers that this sport throws up.

Yes, I am talking about the dangers that some of the marine life presents.

Marine life is generally shy even if they are inquisitive. However, there are some species of marine fishes that are slightly more aggressive and even predatory in nature. Some are territorial and would fight to defend what they consider their domain. The waters of the Indian Ocean are home to some of the most deadly marine species in the world but still I believe that the most dangerous of them all is MAN. Why? Well because although these beautiful creatures would attack only if they feel threatened, sadly man is a creature that attacks for sport.

So then what are these hidden dangers that you should look out for if you go snorkeling or free diving in the waters around Maldives? What are the main marine species to look out for? Which ones could pose the most danger?

Here I have attempted to capture a list of some of the most commonly found fish and marine creatures in the waters of Maldives that one must be wary of. However, this is by no means an exhaustive list and it is recommended that you study the marine life found in Maldives before you venture into the water. It is important that you learn to tell the dangerous from the amenable species for your own safety.

Undoubtedly one of the most beautiful fish that you shall see in the Maldivian waters. It is rare to spot as it usually camouflages itself pretty well within the coral reefs. Sightings in the lagoons have also been spotted.

Lion fish are small in size but very territorial. They are an aggressive species of fish and although incredibly stunning to look at, they do possess deadly venom which if you get stung by could cause a great deal of pain and discomfort.

Medical care is imperative if you do get stung by this fish. If you do happen to spot one then do not make any sudden movements and approach it gently. It is advisable to keep at least an 8 feet distance from this fish in order to avoid the venom. Observe it from a reasonable distance and you should be fine because unlike humans the fish will not randomly attack you. 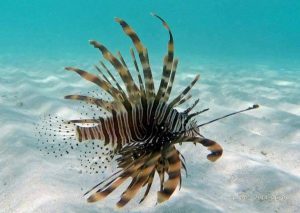 Moray Eels are sea creatures that have been made pretty infamous by Hollywood movies. However, contrary to their name, they neither attack just for the sake of it, nor do they swim about in the ocean looking for targets to impart electric shocks to.

Many species of Eels are commonly found in the Maldivian waters. They do possess rows of razor sharp teeth and if they feel threatened then they will take a bite out of you to defend themselves. These creatures have poor eyesight and you can usually spot them poking their heads out of coral formations, as they look for food. Some of them may even allow you to swim quite close to them but it is advisable to keep a distance of 8-10 feet from them. Observe them placidly from a distance, without posing a threat to them and you can see them in action, catching prey and devouring it. It is truly something worth watching. 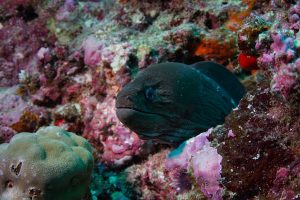 Sting Rays, unlike common belief are actually gentle creatures that can be commonly found in the sandy bottoms in the lagoons in Maldives. They are bottom feeders and prefer to keep themselves partially camouflaged in the sandy bottom in order to forage for food (although you can see them swimming in the shallow surfaces also at times). So, if you are walking in the lagoon then it is advisable to walk with a shuffling gait. This movement will ensure that the sting ray is disturbed and its movement will make you aware of its location.

The sting ray’s jaws do not cause much harm so being bitten is not a danger in itself. But, from the tail protrudes a venomous barb which if you are unfortunate to be hurt by, could be fatal. Immediate medical care is vital when stung by a sting ray barb as the venom contains a neuro and cardio toxin which can cause immense & debilitating pain and if medical care is not sought immediately, it can be fatal.

If you do happen to spot a sting ray, then make sure to keep a clear distance of 8-10 feet from its tail. It could be dangerous to swim directly over a sting ray so swim alongside.

Sting rays gained infamy post the death of famed Australian ‘Crocodile Hunter’ Steve Irwin, who was stung multiple times by sting ray barbs as he was attempting to film a documentary on them. 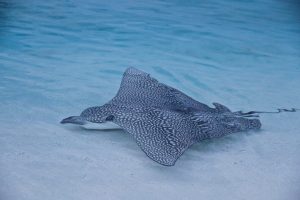 Sea Urchins are sea creatures which appear like little round balls with razor sharp spikes around. It actually looks pretty much like a baby porcupine without a face.

They can be usually found in the sea bed near the coral reefs and sometimes in the sandy lagoon bottoms. The creature moves slowly and comes in a myriad of colours so it’s quite easy to mistake it for a sea plant. It is actually a beautiful creature to see. However, be careful where you step in the water for if the spikes penetrate the skin then it leads to a painful experience as the spikes are not easy to remove. 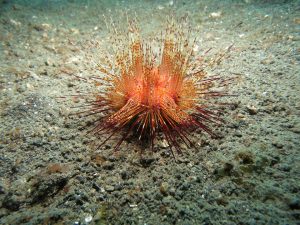 The shallow waters of Maldives abound with Black tip and white tip reef sharks. They are found almost everywhere from the deeper parts of the lagoons to the reefs and till the point in the lagoon where the beach starts. They swim really fast in shallow waters and are not dangerous. They will not attack a human in the water and in fact prefer to swim away but if you have an injury that is bleeding then it is advisable not to swim in close proximity to these sharks. They have a very strong sense of smell and are guided to their food by that smell.

The smell of blood may draw them closer and they may think of you as food so steer clear if you have an injury that is bleeding. 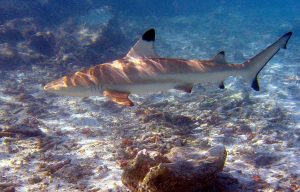 Much has been written and said about the territorial nature of the Triggerfish that can be seen commonly in the Maldivian waters. They can grow to be of medium size and are not aggressive unless you happen to venture too close to their nests. They fiercely guard their nests and eggs and it is advisable to steer clear of them if they appear to be guarding their domain.

Now you may ask how it’s possible for you to know if the Triggerfish is guarding its nest. Well, if you happen to spot a Triggerfish that is not swimming around freely but its movements are restricted to swimming around in circles around a particular spot in the sea bottom/coral bed, or if the fish is facing downward with its mouth near the sea bed for an extended period of time, then it’s a good bet that it is guarding its nest and eggs. Stay a clear distance away from such a fish so that you can observe it naturally without disturbing it. 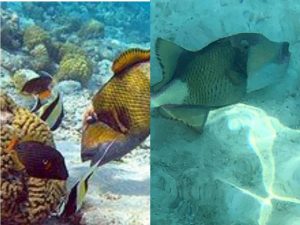 The puffer fish is medium to large-sized, light grey or greyish or yellowish, and is covered with spots. The fish can be found in shallow reefs or lagoons in Maldives.

It is a rather weird looking and slow moving fish that looks pretty benign. Do not be fooled by its insipid appearance for this docile looking creature contains a tetrodotoxin which is a thousand times more poisonous to humans than cyanide. In fact one small puffer fish has enough toxins to kill more than a dozen adult humans and there is no known antidote. Their toxin is also lethal to other fish and that is how to catch prey. It is advisable to keep a clear distance from this fish.

Ironically speaking this fish, although deadly is a delicacy on the tables in Japan. Called Fugu in Japan, it is extremely expensive and only highly trained and licensed chefs are allowed to prepare it. 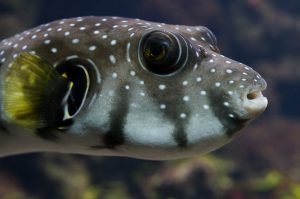 Maldives is home to some of the most beautiful coral reefs in the world. And, although they are a sight to behold, the jagged edges of the coral are extremely sharp and can slice through the skin. The ocean bed also is littered with pieces of broken coral and sea shells that have pointed edges. It is advisable to be very careful why free diving or even wading in the shallow waters. If possible, while wading, wear protective footwear so that the soles are protected from harm. 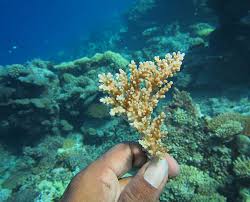 In conclusion I would say that the underwater world in Maldives is fascinating. It is a beautiful cornucopia of colors. The vivid hued coral, the beautiful fishes and the multitude of marine life can hold you in its enthralling grasp so much so that time itself seems to slip away and you are left longing for more.

Snorkelling or diving is an activity that is highly recommended in Maldives, even if you do have to take some precautions. Just be cognizant of your surroundings and read up a bit about what to expect before you venture into the water; and you should return with an experience which is unforgettable.

Scuba Diving: A New Sport {And World} For Women To Explore

10 Handy Tips To Get You Snorkelling Safely & Joyously!

Move Over Raj And Simran! Bollywood Has A New Couple – Kartik And Aman

Why Is The On-Screen Series Game Of Thrones More Problematic For An Indian Audience?

P. Sivakami And 6 Other Dalit Women Writers You Must Read