Mumma, I Am Coming Home!

As her son is all set to leave the nest, a mother goes down the memory lane and remembers her son’s happy childhood days.

The innocence and carefree attitude of a child can be endearing and frightening at the same time. Here is a story of the nostalgia a mother feels when her child has to finally leave home.

The bags were all packed and ready to go. All the important and needed items had found their way into the two large bags that he was to carry with him. My heart was full of pride for his achievements, but the mind kept reminding the sadness of parting ways and the tears would often find their way out every now and then. I knew the lad would be gone forever now, flying away from the loving nest into the big blue skies, flying away towards the new horizon.

As I waved my hand to say goodbye the thoughts took me back to the day he was born.
Impatient that he was by nature, he had shown the same even when he came into this world by announcing his sudden arrival almost 15 days before the due date. The mind then started streaming the good old memories of the past 22 years. As the night moved forward to embrace the dawn, my thoughts took me back to that morning, almost 19 years back.

“Ajiiiiii mi ala (Dadi…. I am home)!!!”. As soon as, Dadi heard the call of her 4 year old grandson she dropped everything and rushed to open the door. Dadaji, whom she was serving lunch and had all her attention till then, knew, that now he will be left alone to deal with his lunch. Before he could nod, to give his permission to go, Dadi had already walked out of the kitchen and was rushing towards the door. The duo then sat on the swing in the veranda and chatted for at least half an hour before coming inside the house. Dadaji had got used to this ritual by now and knew that both his presence and his needs will become inconsequential to his otherwise loving and devoted wife. It was the daily routine, when the two would get so engrossed in their talk that they would become oblivious to their surroundings. All the gossip about the school would first get shared with his favorite Dadi Aji, as he would fondly call her.

“Why have you not finished your tiffin today?”, I asked after checking the tiffin box.
“Areeee, Aai”, he gave a gentle laugh, clapped his small hands and continued “I ate the potato wafers Bhushan had brought today. You know I like them so much, so I ate them”, he explained with an innocent face.
“And what did Bhushan eat then?” Dadi asked with concern.
He shrugged his shoulders and said, “I don’t know”, without any emotions or any remorse for the actions done.

Dadi and I were stunned by his attitude. We tried to make him understand that it was not good to eat someone’s tiffin without taking their permission. But the boy naughty that he was, managed to divert our attention swiftly and started narrating the day’s events, telling Dadi about the alphabets he learned and the poem that was taught in school that day.

Being a very hyperactive child he was always up to some mischief. His impatience was something that his father and I could never deal with. He had a sweet and innocent face and a very adamant and manipulative attitude. Life for him was very simple and straight. Either you go his way or no way at all.  He was always clear about what he wanted and very stubborn about getting exactly what he demanded.There were many such incidents and anecdotes about his childhood that were narrated many times by his Dadi and me with humor and pride.This one incident at my parent’s house was the ultimate height of fearlessness and innocence which was a basic part of his nature.

Whenever I visited my parents’ house, my father, his Nanaji would make him sit on the balcony wall which had a raised iron railing, mostly to show him the cars and buses that were plying on the street that ran opposite their 3rd-floor apartment. One day when my father came back from the office he saw this boy sitting on the balcony wall, all alone, enjoying the view while holding the railing. He was shocked to the core seeing him sitting there unattended.  Even though the iron railings were high, they had enough gap for a small boy to slip and fall down. The boy was coolly sitting and enjoying the view on the street. My father then silently walked towards the balcony and without disturbing he first firmly held him from behind and asked.

“How did you manage to climb this high wall and sit on the railing?”
The boy innocently replied, “Nana Ajoba, you were not there, so I brought the bucket from the bathroom, turned it upside down, stood on it and climbed on the wall.” He innocently even showed how he did it to us. My father had never thought that a simple and pleasurable act of his, had the possibility of turning into a tragic disaster.
One fine day this boy nearly managed to give us all a heart attack by consuming a few mercury tablets used for preserving grains. Surprisingly, he managed to digest both the tablets and the antidote, salt water that was given to him to vomit the harmful tablets out.

One day, while he came running towards his Dadi, she became suspicious of some mischief after finding his hands too warm. The boy was in shock and could not say much then, but we later found that he had pulled out a 15 amp plug top, of the water pump on the well, which was running at that time and had burned his hands. Along with the mischiefs, I remembered the innocent deeds of my boy who once brought an old grandfather and his grandson home from the playground, just to offer them a glass of water. The boy who once gave away a Cadbury chocolate bar to his school friend and was contended with the two eclairs that were left for himself. The boy was crazy enough to try new things and loved to ride his bicycle backward. Once he came up with a brilliant idea of attaching his toy binocular lenses to his goggles. This naughty boy had nautanki (histrionics) in his blood and would often get into dramatic scenes with the single intention of getting his elder sister reprimanded for the sheer pleasure of entertainment. And yes he had unending stamina of talking nineteen to a dozen and it lasted till he had finally fallen asleep.

I remembered how as a young boy he was very much attached to me. He had a peculiar habit and that was for everything that was denied, I would have to give him a detailed explanation. The time and energy I spent to make him understand my point of view helped in creating a special bonding of trust and understanding between us. So, when we decided to send him to a residential school he readily agreed to go when he realized that learning would be fun there. I used to be worried about his aloof nature. In his initial years at school, his teachers observed him be a loner and they said he would mix up with friends on his own terms. It was a cause for worry, but the boy slowly learned to adjust and compromise. Later, he made a lot many friends, though he had only one or two who were very close to him.

As he grew up, I remembered the boy had problems in expressing his feelings of love and care for me openly. I tried to understand and took it as a part of growing up. But, once while he was studying in Chennai I received a parcel which was a birthday present. When I opened it, I was surprised and overwhelmed to see he had sent me a photo frame of us together. And that day I understood that he had very unique ways of expressing his feelings.

The preferences and habits changed as he grew up. His hyperactive and analytical mind was drawn towards  buildings blocks, solving odd puzzles, writing PJ’s and playing with the Rubik’s cube. During his teenage years, he fell in love- not with any girl which is very common in that stage, but with Computers. The bond that was forming between the two grew so strong that he made it a goal of his life. He then decided to learn everything about computers.

Today when has gone abroad to do masters in Computer Science, my mind wants to bless him for completing his course with flying colors and have a successful career ahead. But, my heart wants to hear the golden words- “Mumma! I Am Coming Home”!! 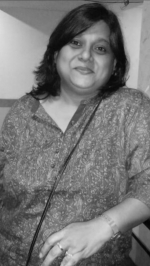 A Choice, Not A Sacrifice! [#ShortStory]

Was It Really An Empty Nest? [#ShortStory]