When Your Family Tells You, “A Good Wife Knows How Not To Get Beaten By Her Husband”

When women complain of domestic violence, how often do their own families counsel them to "adjust for the sake of the family"? More often than we like to think of.

When women complain of domestic violence, how often do their own families counsel them to “adjust for the sake of the family”? More often than we like to think of.

“I’m sorry! I was drunk last night.” Rajeev apologised to Rohini once again. The whole morning he kept saying sorry for what happened last night but Rohini didn’t reply. There was no sound of sobbing, unlike the previous night; Rohini’s dry eyes kept staring at the corner of the room. She wasn’t sure as to what to do next.

Rajeev came to sit near Rohini. He was repeatedly saying sorry and this time with a cup of tea in his hand. He had made it with ginger and elaichi, just the way she liked her morning tea. It was then that Rohini’s parents got there, of which Rajeev had no idea. Only now did things look serious to him.

There was silence for a good two minutes before Rohini broke into tears once again seeing her mom. Minutes passed until Rohini gradually stopped crying. It was Rohini’s mother first who questioned them about what happened the night before. Rohini start explaining everything.

Last night had been a perfectly normal night for Rohini until Rajeev came back from office at around 11.30. That was later than usual and Rohini was waiting up for him, a little worried. She could finally relax, as he got home. When she asked him why he was late, it seemed as though he was already annoyed. Rohini also smelled a whiff of alcohol. Yes, Rajeev was highly intoxicated. He couldn’t even talk or walk properly. She was about to question him but he seemed a little aggressive so she dropped the matter for later and hurried to the kitchen, not wanting to press the matter.

She start serving dinner and that’s when it had all started.

Rajeev took the first bite of food and start yelling at Rohini in anger; that the daal she cooked wasn’t good, that she hadn’t put salt in it….she tried to explain it saying that she might have forgotten to put in salt since she was so worried about him. But it didn’t work and Rajeev threw his plate on the floor and started shouting at her. Things got worse and after hours of shouting at Rohini, he hit her. She tried to fight him but couldn’t do much. After Rajeev was done with hitting and shouting, he went to bed. And there was silence.

After listening to everything, Rohini’s parents wanted to hear Rajeev’s part of the story (Yes, they still wanted to hear his clarification). Rajeev explained that it was all because he had had a bad day at office which led to intoxication and all that happened was a result of that. And that he had not intended to hurt Rohini.

Rohini’s parents seemed a little convinced even as she didn’t say a word. Rohini’s father took Rajeev aside and told him not to repeat this incident ever again. That it was the first such incident and that is why they forgave him. Rajeev agreed wholeheartedly and apologised with grave guiltiness.

In the meantime, Rohini’s mother explains to her that a woman was incomplete without her husband. And that she has to keep her husband happy in order to build her family. That it is a woman’s responsibility to take care of her husband. That if she can’t keep her husband happy and satisfied by all means, it is her failure and she is good for nothing. According to Rohini’s mother, Rajeev had no fault in all this – it was the alcohol which caused him to behave like that, and also, he had been in a bad mood.

Rohini’s mother taught her how to act in such a situation. She told her not to react to his bad behaviour when her husband’s mood was bad. That way she would not get beaten. According to her men were aggressive and violent by nature. They were not sensitive like women and didn’t have so much patience. So it was the wife’s duty to have patience and tolerate it for the sake of her marriage. A good wife would know how not to get beaten by her husband.

Rohini didn’t say a word. Her parents were satisfied that they had solved the matter in the best way possible and also, that they had saved their daughter’s marriage. And by that, they had saved her life. After all, she was a woman and a woman cannot live in her parents’ home after marriage, because what people will think about her character if she can’t live together with her husband her marriage? Right? 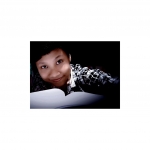 I'm not a writer..nor a story teller. But sometimes I feel like say it all out loud. But when there's no one to talk to pen and papers come to my rescue. read more...