Who was Amma? What was her life made up of? Did anyone really know?

Who was Amma? What was her life made up of? Did anyone really know?

Even today as she lay one last time in the house she had entered as a child bride some 70 years ago, Amma smelled of the kebabs she had served her family last night.

Like in life, in death too Amma had no smell of her own. In all these long years the spices mixed with the dust and grime of life had dissolved and settled into the layers of her flesh.

Her bones had birthed; and her womb had nurtured. They too were strangers now, they no longer smelled of her blood.

Amma’s husband had a itr shop in a street across the masjid. ‘Sahab’, as she lovingly called him, brought her jasmines and roses bottled up in colourful bottles. But even those smells were given to her. Sahab died in his youth and the borrowed smells also faded away gradually.

Amma’s life smelled of rituals. Rituals, carefully ironed at night and laid out impeccably throughout the day.So when she died as quietly as she had lived, she left behind no smell, even the ashes of her dreams didn’t reek of her wounds.

They found a box near her bed the next day. It had neatly folded papers of all sizes, some had yellowed. They were all pictures of rivers – free, falling, flowing, breaking boundaries when happy and drying out when sad.

Pictures cut out from newspapers, magazines, school drawings. All the rivers in each picture were blue, the same blue as her eyes. 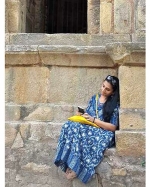 A collector of stories, I am a freelance event curator with an experience in liasioning, content development and ideation for heritage & culture themed immersive events. I have featured in a documentary produced by the read more...