This author was blessed to meet an incredible host mother in Chile, whose life story will surely move every reader. Find out for yourself.

This author was blessed to meet an incredible host mother in Chile, whose life story will surely move every reader. Find out for yourself.

We were in September, and the sun had been hiding away for many days from Chiloé, a southern island of petite Chile, and rain thudded the brick-tiled roof unabashedly. As I shivered after a shower on a cold evening in Castro and to avoid getting scolded by my host mother when she would have seen my wet hair at dinner, I walked down to warm my head near the kitchen fire.

My host mother, who was already sitting at the round, wooden dining and sipping mate from her cup, called me to join her while patting the thick sofa cushion on her left. Perched on her right, the British volunteer, who was also teaching English with my program, rolled his eyes as he saw me accepting her invitation and approaching them. Respecting our usual friendly banter and rekindling the Indo-British feud, I threw some bad words in his direction.

Then as the three of us huddled at the dining and sipped tea in the cozy kitchen of our uninsulated home, my host mother told us that her brother had just come home to request some wine, and then she warned us not to trust him as he was an alcoholic.

Though I had seen her brother visit us every day, eat bread and cheese at the dining, drink wine, of which she kept a big bottle in her kitchen especially for him, I never realized that he was an alcoholic. Maybe I was focusing on cracking the heavy Spanish that darted to and fro between the siblings.

But his alcoholism was not the devastating part of the story.

A mom and alone…under twenty

My host mother then started mentioning something that caused a lump in her throat and made tears roll down her plump cheeks. I gave a questioning look to my friend to make sure that he was also listening to the same horrific story that I understood with my nascent Spanish. When she stopped to breathe, he translated it to me in English to make sure I understood well.

My host mother’s boyfriend was tortured during the Chilean dictatorship, and he fled the country, leaving her and their newly born daughter under her solitary care, when she was not even twenty. I gaped at her and, at a loss of words about the dictatorship, I asked her about her parents.

Wiping her tears, she told me that her mother died soon after my host mother had given birth, and within a week of her death, her father and brother threw her in the backyard, which only had a shabby room, along with her few-months-old girl.

Taking some moments to absorb what I had just been told, I looked around the kitchen with my welled-up eyes. A wooden fire was raging inside the oven-cum-stove in front of us, a few pieces of marraqueta bread were toasting over its iron surface, a cauldron of chicken and pea soup simmered on the gas stove on our diagonally-left end, and the orange curtains with big birds on them shined on the right-side window.

During the two months that I had been in her home, I thought that the house would always have been comfortable. But when she was left to live there, she said that she only had a washing machine in a makeshift room. Then she built it into a six-room house which always smelled of toasted bread and crackling fire, and cumbia played on the radio, while travelers from around the world came looking for her bed and breakfast.

Sixty now and a woman to reckon with

At the age of sixty, she ran a whole Airbnb sort of a setup, alone, and on just word of mouth. On a Saturday morning, you would see her running down to the dock to get fresh sea algae and salmon so that she could cook the traditional island food for her lodgers. If one of us caught a wretched cold, she made pitchers of lemon and honey water throughout the day and came running to us on a shout. She apologized if a Chilean teacher or a friend disrespected us. She enunciated Spanish words even if she had just woken up at six to send me to the bus station.

I watched her face and felt as if I was looking at her for the first time. Before when I had seen her being so good with others, I had assumed that her kindness was of a reciprocative type. But no, she had just decided to turn the wind around.

Even though her brother, who had watched her carrying her baby and running a business alone from the drawn curtains from behind closed doors of the front portion of the house, didn’t help her, she opened her home to him when he needed it. Crossing herself, she said that if she gave food and shelter to others, she would receive much more, and the goodness will spread.

The challenges of life had softened her demeanor but had toughened her inside.

At that moment I understood why she was surprised and pushed me relentlessly when I told her that I could not take my students to the inter-state debate competition as the head teacher at my school hadn’t agreed. She had said, so what if he didn’t agree, talk to the principal, write to the program, ask the children to send a letter. But she never once said, maybe you can’t go, for she had practised not giving up her whole life.

The people she loved the most had betrayed her, but that didn’t stop her from trusting her boarders. Like one big family, we freely roamed around in the house, baked bread with her, cooked Indian and British food for her, carried her wallet if she forgot it at home while going shopping at the supermarket, and spent Friday evenings drinking Kunstmann beer and wine and welcoming the weekend together. I am also guilty of cuddling her in her bed before going to sleep, every night.

Making the mistake of becoming a mother at an early age hadn’t turned her into one of those people who forbid everyone from doing anything. If I didn’t come home all night, she neither gave a judgemental look nor did she impose any rule, unlike many other host families of the English teaching program I was part of. That we should stay safe and enjoy life is all that is important, she said.

Her own family might have left her, but now travelers from around the world are part of her family, for she calls them her sons and daughters. Some of them now stay with her in the form of pictures on her house walls, some visit her whenever they can, some call her to wish her birthday, some have left the most gracious notes in her thick testimonial registers of which she may run out soon, some are still sitting with her in her house, and some, like me, are thinking about her from the other end of the world and receiving her positive energy.

She is one of a kind, my mother.

Priyanka Gupta is an itinerant writer, a travel blogger, and a poet at heart. She travels often and long and tells the stories of people she meets on the road. Read more of her writing read more... 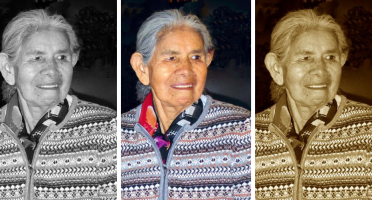 Travelling Alone In Peru, A Peruvian Grandmother’s Act Of Kindness Made Me Feel At Home 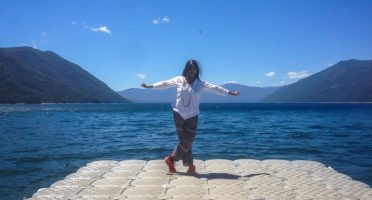