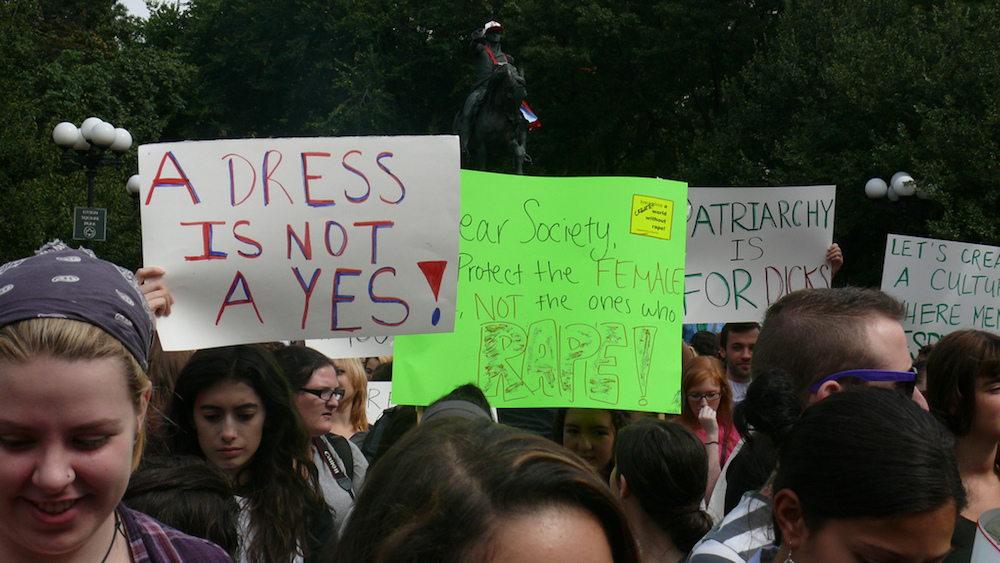 The #MeToo Movement Needs Women’s Solidarity, Now More Than Ever

The #MeToo movement brought down many powerful men internationally over the last months. So why are some women distancing themselves?

The #MeToo movement has been the undoing of many powerful men internationally over the last months (Steve Wynn, the Las Vegas casino mogul from the Wynn group being the latest, and more cases emerging each passing week).

In India, the movement has given a boost to the already ongoing national emergence of need for overhaul in gender consciousness post the 2012 Delhi gang rape. Indian women who have access to the platforms championing the movement joined in one after another, sharing stories that maybe had long been made peace with. “Too insignificant.” “Just happens.” “Worse things happen…”

The collective courage and realization of each of us, that each of these stories matter is tremendous. But is it enough? What other roles should we women, especially if in any position of power or influence, play? How do we address the voices that dissent or digress without shutting them off and why should we?

My thoughts on this start with experience and observation of some women in the aforementioned privileged group through my work in the US.

Last December, right on the heels of the #Me Too movement, we hosted an event for my non-profit in a neighbourhood community library here in the US. My non-profit is for gender rights, so along with supporting various rescue, training and rehabilitation activities, we also organize dialogues and discussions on gender and gender roles. Through my work and involvement in this field, connections between ‘pink pretty girls‘ (much bigger from my observation in the US pop culture than in India), ‘tough and don’t cry boys’ and a hard slap or acid splashed on the face aren’t that farfetched.

Forced gender based role segregation and capability/preference assumption plays a huge part in how we men and women view power, prejudice and even our rights. And although deeply patriarchal societies show deeper/more widespread scars, in all cultures I have come across I have found this to be true. So we hosted participants (men and women) from widely different cultural, national, and socio-economic backgrounds to talk about everything – from how we raise boys vs. girls, to gender discrimination and violence.

Everyone leaves drawing some connections so that a new group actively strives for gender neutrality while raising the next generation (quick note: gender neutrality here implies striving for a world where your gender doesn’t matter to what you are able or allowed to do and how you are redeemed for it, not becoming genderless or having no gender).

Yes, women are harassed but…

We established in the first half that the differences we attribute to men and women and the gender roles we assign to them are at the very minimum exaggerated (societal conditioning at play more that biology) by exploration of different experiences and preferences. We discussed the importance of neutrality while raising our boys and girls – from toys to sports – and the behaviours we consciously or unconsciously instill in them. And then, the opinion expressed dominantly in the room started sounding something like this:

Yes, severe abuses happen to the underprivileged maybe in third world or conservative countries. But there is a difference between a butt pinch, the terrible things like rape and acid attack vs. what is being cried about here. These women have all the choice in the world to say no. These are powerful women…

There is always a choice – I have made it to the top – I made a choice to be not abused/take bullshit….

I am writing this after over a month, so a disclaimer is warranted here on quotes not being verbatim, but they are not too off either. I received calls through the evening from women in the audience – ones not ‘strong’ maybe – ones who didn’t know that all this was a choice (like me) – expressing their concern and grievance. But we didn’t feel appropriate to stop the discussion, and this is why: if the 2016 US election has taught me anything, it is that there is no point preaching to the choir. No matter how uncomfortable and afraid it makes us, it is important to acknowledge and explore with an open mind all sides of an argument – especially the ones that seem outrageous and excruciating. That is the only way to ever progress towards real change.

Some of these arguments I had heard before, interestingly mostly from Indian men (a look at the discourses via comments under any Rediff or TOI article on topic will prove my point) or some female politicians (in India and the US). Some of the arguments I heard were fresh, or rather, heard from a new perspective fresh (an unfortunate and a bit removed of a perspective for it views some parts of the world in a differently despondent light when it comes to gender discrimination. Note here: I am not denying that societal and infrastructural support towards gender equality very widely differ across different parts of the world. But men and women and power and prejudice, and harassment that stems from that, are pervasive throughout. If anything, #MeToo showed us that).

Most perplexing to me however this time was that all of these comments were from women. Very strong and influential women who had made it big in male domains where others had perished; women who I knew had had to fight the hardest to be where they were. Anyways, we heard them with as much of an open mind as possible and that is where my thoughts below stem from and culminate towards. My need to share comes from observation of the damage that this kind of dissent, especially coming from women, wreaked on other women and the cause.

How women’s dissent to #MeToo harms other women

I am not refuting that there are numerous instances of false accusations, women who take advantage of situations and of genuine misunderstandings on consent. That is why education and dialogue is even more important. But we do have black and white facts on gender inequality and abuse.

Women are disproportionately higher victims of violence and human right violations. Conflicts and infrastructural weaknesses only further expose the spikes for two reasons: abusing and subduing women is often the instrument of choice for controlling, defeating, or establishing the power equation, and women are more often than not the brunt bearers of inequality when resources are limited. But that doesn’t mean that this is not true in non-conflict, or developed world experiences. Workplace and everyday harassment disproportionately affecting women is a real problem, and it is connected to what happens in the situations we think are so far away from due to their being in some faraway lands.

Similarly, it is ludicrous to bring up a dissenting point on other problems to dissipate focus on something else. To give an example which might make sense when looking at this from India (because distance and a wider vantage point often exposes insanity that can’t be seen otherwise) – to say that acid attack, rape, every day harassment in transportation, discriminations and cat calling, faced by women in our country matters but what about the false claims or sexual harassment or how men are abused using 498A would be like saying yes, gun violence is a problem in US but what about people who get killed by knives?

Therefore, I want all women (and men) in position of power and strength to consider these few points:

1.If a choice comes with fear and negative consequence – is that really a choice? And if yes (for those who would like to go into a semantics about all choices come with consequence) – then in a matter which violates another person’s rights, should anyone be put in a position of having to make a choice?

2.We are the only ones privy to our struggles – but just because I have overcome certain hardships, should I choose to assume the same for others? What if their demons, or gifts, are very different from ours? Can we be open to accepting that ‘strength’ can’t be defined in just one way for everyone?

From women in Bangladesh in garment factories in less than dollar a day pay who feel powerless and choice less to say no to abuse for fear of losing the only source of bread for her family, to the manicurist the Wynn group settled with decades back, to a powerful actress, or playwright who stayed silent as a career choice or to avoid what they believe would be pointless pain for themselves or their families – none of them have a choice as what I believe to be a choice. They were all abused.

Similarly, a women who froze during abuse, chose to forget her abuse for decades, maybe choosing to be a mother instead to her children, and raised her hand only with support of #MeToo – hanging onto someone else as an anchor – is strong too. Her strength is just different from your strength. Just as we may know many women who flirt with their bosses and use male interest for advancement, there are men too who do the same.

We can’t afford to digress, to debate things on which getting matching stats on would be futile and impossible. Maybe one day when we have solved the gross problems we can dwell on the finer ones. Till then, our role as men or women, especially women, needs to be one of support and championing. Raising our hand that this happened to us to is great, but even if it didn’t, that shouldn’t preclude us from trusting the narratives. That should not cause us to enter the arena with a bias, because a dissenting voice doubting facts is something the women who don’t have our platform can’t afford.

What The #MeToo Movement Is. And What It Shouldn’t Be Allowed To Become