Sanjana Ramesh, India’s Under-16 Basketball Team Captain Is Aiming To Shoot At The Glass Ceiling

Women have broken the glass ceiling in the world of sports, and Sanjana Ramesh, the captain of the Under-16 Indian Women’s Basketball team, wants to continue doing this.

Women’s achievements in sports hardly receive any media coverage. Their achievements are often undermined and overshadowed by their male counterparts. But now, times are changing. Women are reaching an unimaginable feat in the world of sports. Sania Mirza, Sanya Nehwal and the Phogat sisters are the perfect examples for this.

Meet Sanjana Ramesh, the captain of the U-16 Indian women’s basketball team. This 16-year-old rising basketball star is determined to make a name for herself in the field of sports.

She is currently a student at DPS Bangalore. Sanjana has always been interested in sports and has been playing basketball for the past five years. She trains rigorously for nearly two hours every day to stay fit. She also likes to play Frisbee, Badminton and Tennis. In addition to sports, she loves to play the violin and occasionally gives small performances with her music teacher. In this interview, she explicates on her interesting role as a captain, how challenging the world of basketball is and what it really means to manage a girls’ sports team. Here are some excerpts:

How does it feel to be the captain of India’s U-16 women’s basketball team? What was your initial reaction?

I feel honoured to be the captain of India’s U-16 Women’s Basketball Team. I was appointed captain a couple of days before the Asia Championships started. The news was given to me by the Coach Mr Zoran Visic and Assistant Coach Mrs Anitha Paul Durai. Initially, it came as a bit of a pleasant surprise considering there were players with more international experience. At the same time, it was a special feeling that instilled a sense of added responsibility in me, which I really enjoy.

Are you facing any challenges in your new role? If yes, what measures are you taking to overcome them?

Luckily, all my teammates were very cooperative so I did not face difficulties in the new role. We had regular team meetings to sort out any issues and ensure that we were all the same page with the goal to win the tournament for the country.

Do you feel any duress as captain? Does it affect your performance on court?

There was a bit of pressure initially, but my teammates and coaches were very supportive. Thus, we also started the tournament well. This reduced the duress on me, so I do not think it affected my performance on court.

Did your parents/friends encourage you to join sports, or was it your own decision?

I always enjoyed playing sports throughout my childhood. Even before I played basketball, I used to play a lot of badminton and tennis. A few coaches noticed that I could play basketball and started training me, which is how I started playing the game. Back then, I played it only as a hobby and became serious about the game only over the course of time. So I can say that it was partly my decision and partly encouraged by others.

How did your friends and family react when you were made the captain of the Indian’s U-16 basketball team?

I think they were very happy. They all sent me congratulatory messages and shared the news widely. A lot of them even came for the games and supported me in person.

Were your friends and family supportive when you decided to pursue sports?

There are very supportive. Initially, they were a little reluctant. They started being very supportive once I started doing well and playing at the state level. Even now, my mom travels with me for all the practice sessions and tournaments.

Did anyone dissuade you from pursuing sports? How did you respond to them?

Occasionally people do make comments that could seem discouraging. My view is that the best way to respond to them is by performing well. Over time, I have learnt to ignore these things and not be hurt by it.

The Bollywood film ‘Chak De! India’ portrays how difficult it is for the girls’ team to get along with each other. Do you think this is just a stereotype? Or is it really hard to manage the team? 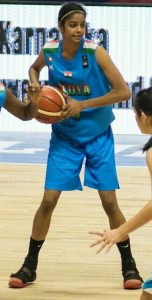 Sanjana Ramesh is trying to promote sports among teenage girls

I have not seen the film, though I have heard good things about it. In my experience till now, it is only a stereotype, which is highly exaggerated. We all come from different parts of the country and speak different languages, so there are some differences initially. But I think we all got along very well, without which we know we can’t give our best performance. Sometimes, there are minor arguments, but I suppose that’s only natural in all teams.

Do you think that women’s sports teams are not sufficiently funded and their achievements are not given enough media coverage?

Possibly. But I do think that the situation is improving. We had some very good facilities for our national camp this year. All our needs were well taken care off and they did not compromise on providing us with good facilities during the training session. The Basketball Federation of India also rewarded our team by giving us Rs. 20 lakhs for winning the Division B of the Asian Championship.

The print media coverage was decent for the Asia championships but that could just be because it was held in Bangalore. My hope is that the same coverage would continue for other tournaments as well. I think the situation exists maybe because the Indian team is not highly ranked and tends to not perform well at tournaments. But that is already changing with both the Women’s and the U-16 girls’ team winning the Division B of Asian Championship this year. Hopefully, more such victories would increase coverage.

In your opinion, is there anything the public can do to encourage young girls to join sports?

I think attending the matches and cheering for other women would be wonderful. We played in front of decent crowds in the Asia Championships and it gave us a huge boost. I also noticed a lot of younger girls from the basketball community, and seeing huge crowds would boost their confidence. Most important is to allow young girls to play sports without too much pressure or judgement.

Do you have any advice or words of encouragement for young girls who dream to have a career in sports?

I would really encourage more girls to start playing sports. It need not be at a competitive level. It is fun to just start playing a sport and if all goes well, you can later start competing at a professional level. It is important to have fun while playing, especially when starting off. In my experience, that is the best way to sustain interest.

We wish her all the best for her coming matches, and hope that the team brings laurels to the country!

Meet The Indian Women’s Rugby Team Which Is Breaking The Stereotype That Women Can’t Play Rough!