Like A Soaring Kite, A Woman On A Cycle Is Free, Free, Free!

A woman on a cycle, and especially one who is unafraid to ride any road, is the best sign that a country is truly a free place for its women. 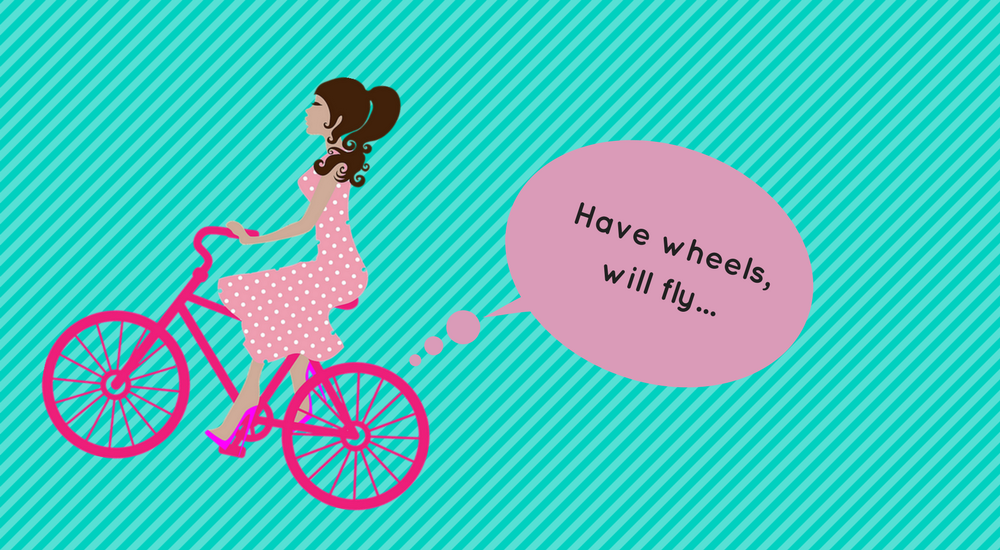 A woman on a cycle, and especially one who is unafraid to ride any road, is the best sign that a country is truly a free place for its women.

From my childhood days, I have associated cycling with freedom. I long for those days when we rode crazily on slopes, eyes tightly shut, hands flying to the sides and nose sucking in the fresh air. We were like soaring kites and with every gush of wind our spirits rose higher and higher. The fun continued through my college days too; riding my black Street-Cat, I was Asha Parekh in my own reverie.

Upon marriage, my bicycle, which had witnessed those carefree days, was given away to the Helper, on which he brought vegetables and eggs. And I learnt the most essential ‘virtue’ which is mandatory for any fauji wife, in fact any wife’s survival – to demand. So I demanded for a vehicle when I needed to go anywhere, I demanded when there was a ladies club meet, I demanded when I had to pick up a matching churidar for my red kurta from the market and some days when these demands were not met, I demanded for my ever-busy husband to ferry me to the place and back. So that is how the story is created of wives being demanding creatures!

But in reality, I was reduced to being a person without my own vehicle. Tasks which earlier I used to so effortlessly fulfill with just a few pushes of the paddle, now required cycles of demand and wait. Yes, there was the option of driving a car. But as everyone knows, a man may trust his new wife, but most will never trust the new wife with the car. I am not at all exaggerating. For the first two years of our marriage, whenever I used to open the passenger side door to get down from the car, he would say, ‘Be careful!’ When it happened for the first time, my heart was overwhelmed, but before I could get the chance to blush with sentiment, he added, “Don’t bang it on the pavement”. And I tell you there is no fun in it – it is like riding in a cage, windows all rolled up to block the pollution and somebody else wheeling the steering – you are literally taken for a ride. You don’t feel the air in your hair, do not enjoy the rhythm of your limbs as they move with the momentum and do not get that rise of spirits as you smile as if kissing the air.

It is not that I don’t get to ride a bicycle. I do, but my point here is to extend the cycling from being a recreational activity to a utilitarian activity. I know it is wishful thinking, but imagine the big difference it will make if we start doing our day to day chores on a cycle, at least within a manageable radius. In an average middle-class family, the daily fuel consumption is so high. First, the man’s up-down to the office, then the kids up-down to school, market, friend’s place and then the lady’s visits to office, parlour, tailor, mall, etc. Believe me, there is a huge market conspiracy. First, they give fat cheques to people and then they open fast and fatty eating joints because the poor fellow has no time to cook for himself. And when he gets fat like his pay-cheque, they open the health spas, gyms. So whatever one earns, is spent then and there.

All these problems have only one solution…yes, bicycle. It will be like our personal gym. Minimum maintenance, maximum benefits. I know, to many I may sound utopian. But this is quite possible. There is a wrong prejudice that in well-off segments of society, only young people, preferably males, ride bicycles and that too for sports activity. No, it is not so. In advanced countries like The Netherlands, it is a common sight to see a middle-aged woman going for her regular grocery shopping with her kid propped in the front seat of her cycle and the other one trailing behind in a cozy buggy attached to the cycle. And that’s why many people there don’t own a car – not because they can’t afford it but because they don’t feel the need for it.

Yes, we are way behind from that level. For that, we need integration of cycling with public transport and pro-cycling government policies. Frankly, the only visible support I have seen from political parties till date is from  theSamajwadi party which has a bicycle as its party symbol!

But we can at least take first steps, like making use of cycle mandatory on certain tracks or offices taking the initiative to encourage their employees to cycle to work at least on certain days. For instance, at the Pune College of Military Engineering it is mandatory for everyone to use a cycle on two particular days in a week. It is so refreshing to see cycling not only as a recreational activity but also as a mode of transport there, irrespective of class, rank, age, and gender. Raahgiri Day is another great initiative which has given wings to our fantasies, given us hope that yes, it possible to give motors a break and let the child inside you be free and happy. I am sure that the day is not far behind when we will actually have dedicated lanes for cyclists and measures to ensure their safety.

Honestly, for me, cycling is not a mere health activity or some hobby. For me, it is a symbol of empowerment, a faith that yes, our society is progressing in a better way. There are many issues related to women bicyclists in India; I will not dwell into them. The day I will get that courage to ride my bicycle on any road in our country, be it busy or lonely, in a group or solo, will be the day I will truly become a carefree and empowered woman on Indian roads.

And for that to happen we need more and more people on roads on cycles, a silent revolution to boycott the fuel-barons and make administrations see the need to make roads cycle-friendly. So people! Take out your cycles, go shopping, and go for long rides. Enough of caged-rides – be a soaring kite, and feel the wind beneath your wings. And as a popular TV Ad says, ‘why should boys have all the fun’.