Nidhi Goyal, a visually challenged traveller was allegedly stranded at an airport lounge in Munich without food. Is the world still struggling to provide basic services to specially-abled people? 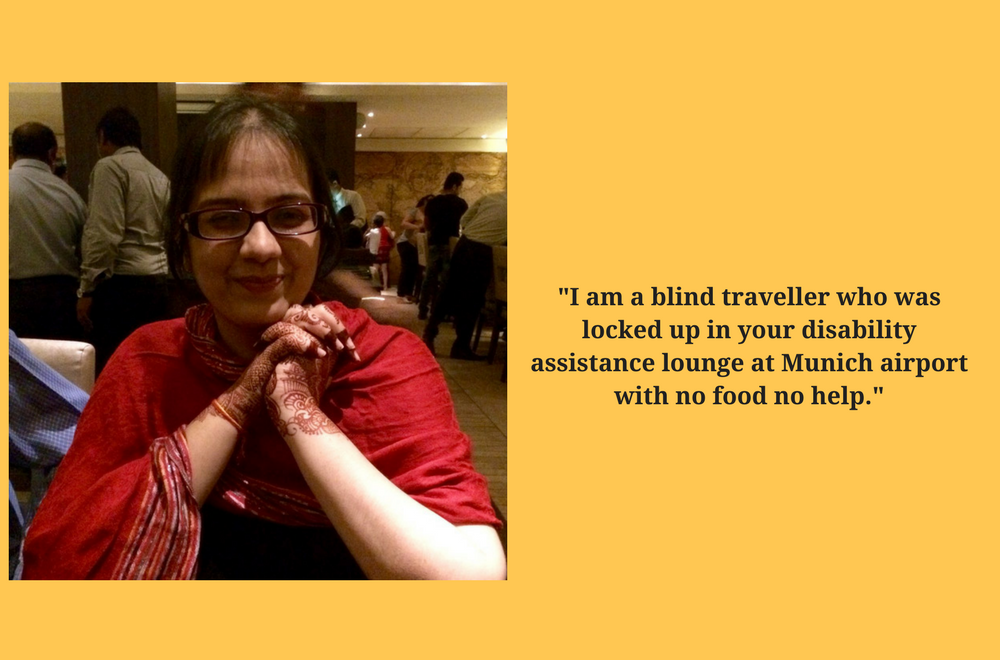 Nidhi Goyal, a visually challenged traveller was allegedly stranded at an airport lounge in Munich without food. Is the world still struggling to provide basic services to specially-abled people?

Nidhi Goyal is a social activist who stands for gender and disability rights. She is India’s first visually challenged comedian, and a beautiful human being in general.

Yesterday, she was allegedly left stranded in an airport lounge in Munich without food and basic amenities because the airport staff refused to assist her with her needs. She posted a twitter thread describing the incident, which exposed the gross insensitivity that humans are capable of showing.

Read the full thread below:

i landed at 5.10 am and next flight was 11.30. i had mentioned to the staff assisting me i will need help to buy food from a cafe later and will have to exit airport for 2 hrs to meet a friend. i have a valid #schengian #visa.

i went to pack my bags and exit the lounge to go in search of food because i was getting #hypoglycaemic. the staff stopped me. #refused to return my boarding pass and denied me exit- not allowed to go" she said… #power #traumma #control

the staff spoke to a senior. but she was not good with english so i asked to speak to someone directly. she didnt allow that. she didnt return boarding pass. i called my friend and asked her to spk to staff in german. my friend was told tht i couldnt leave lounge & airport

inspite of valid visa i had to send my friend back. hungry detained i returned to my seat after literally snatching my boarding card back. another lady staff came in and told me it was my fault that i had not booked for intermitant assistance.

the reply was that mobility assistance service refuses to help beyond this. all they could do as a favour is they go out and get coffee but i could not step out. i said i need to choose a snack since i am vegetarian. but again it was no!!! #anti #disability #rights

i dont think you are #trained in or #sensitive to rights of #persons with #disabilities. ur new aricrafts also exhibit that. individual call buttons on touch screen how is a blind passenger suppose to use it? #UNCRPD #universal #design

The whole thread went from bad to worse, and the sheer ignorance that the Lufthansa’s staff allegedly showed is appalling to read in this age when the world is, apparently, more ‘woke’ than before.

What this makes me question is that, in a place like an airport where one expects the best of services, something as ignorant as this happens. These assistances are something that an ordinary person would do out of common civic sense, and these people are present especially for helping their customers. This makes it even more upsetting to read.

We strongly condemn the said actions and expect Lufthansa to take action over the concerned people so that anything like this is not repeated.

Share this thread to make so that the authorities take notice and then the remedial actions, as soon as possible. And let us know what you think!