Dear Twinkle Khanna, Time To Own Your Claim Of Being A Feminist ASAP 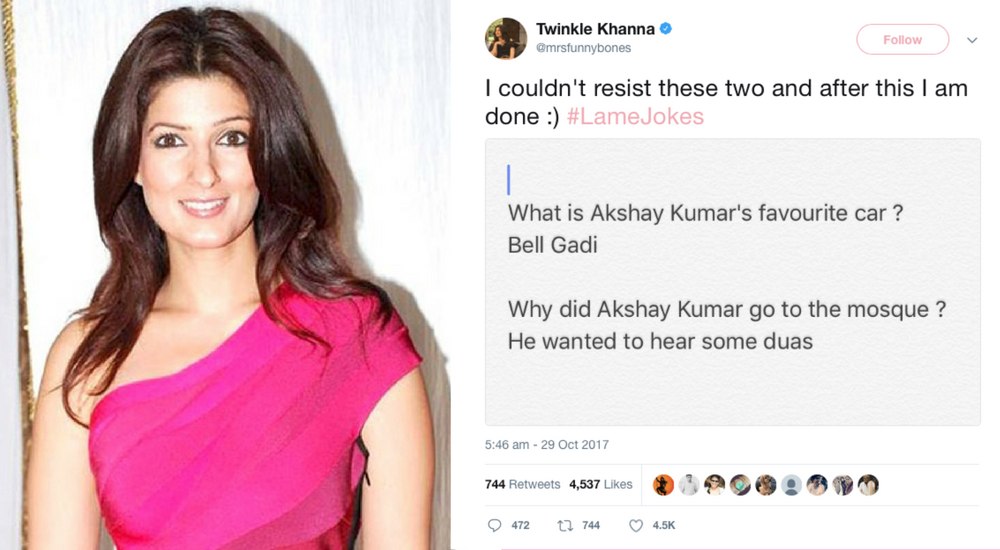 Recently, a video surfaced showing Akshay Kumar passing a lewd comment to Mallika Dua on the sets of the show, The Great Indian Laughter Challenge. He was heavily criticised for doing so and had since, maintained a shrewd silence on the matter.

Twinkle Khanna, however, was apparently forced to make a comment on the same because of the conflict between her identity as a feminist and the sexist nature of her husband’s comment.

I was a fan of her wit, humour and most of all, her outspoken nature as a feminist which is hard to find in the world…UNTIL this. I understand that she has the pressure from both sides, the family and the media, but an apology never hurt anyone. If we make even a seemingly inoffensive joke in our daily lives, we do apologise to that one person who get offended at it. And that’s how it should be if we aim to be a tolerant society.

But this response by Khanna belittles the whole incident, exactly the way sexism in real life, be it on the roads or the workplace, is shrugged off as ‘no big deal’. Akshay Kumar may not have meant to be offensive, but it did make Mallika Dua uncomfortable, which is exactly what she spoke about on her social media. AND later took it all down because she did not want to be cyber-bullied. Isn’t that sad?

What is even sadder is a feminist like Khanna making that response, and after that, posting some jokes to casually brush off the incident because “humour has to be taken in the right context”. 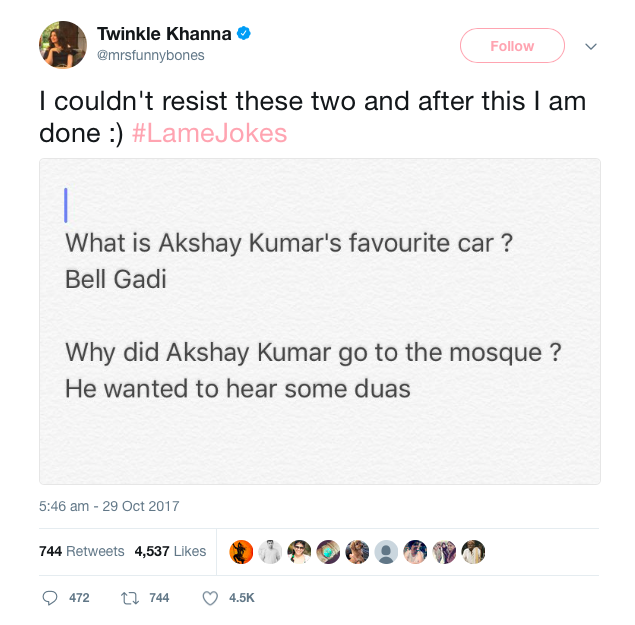 And this was Mallika Dua’s response:

Those jokes were in extremely poor taste and now it makes me question my implicit belief in her. And then, all the drama about how Mallika doesn’t deserve to complain about it because she’s played sexually ambiguous roles in videos. That’s bullshit, alright. You cannot tell a woman if she has the right to dignity or not. (Not only a woman for that matter, but anybody.)

Fortunately, Mallika Dua had the opportunity to air her views in article that she wrote for the Quint. She fluently shut down all the drama that has been building up.

“As women we are used to normalising this kind of banter at workplaces because there are much bigger issues at hand, and that’s exactly what I did. People wonder, “why now?” Is it because the three mentors have been “fired” from the show? No Sherlock, that would make for a great K-serial, but that’s not the story. It was Star Plus that decided to replace us, not Akshay Kumar. Our contracts were not with Akshay Kumar. We have been treated respectfully by Star Plus, monetarily and otherwise, and were quiet and dignified through weeks of filthy news of us being supposedly “fired”. I could’ve leveraged my social media following to outrage right then, but I saw no reason to. Professional partnerships end all the time and this, if anything, was a mutual separation. Shit happens.”

I wish Mallika the very best, and hope that she stands like this against the haters with all her strength.