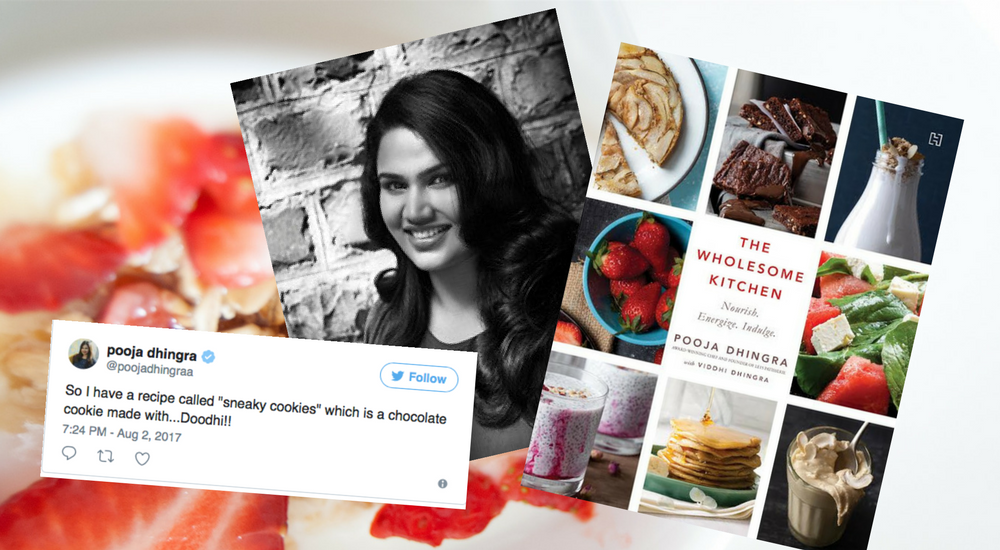 Pooja Dhingra, the entrepreneur behind Le15 Patisserie, talks about her new cookbook, The Wholesome Kitchen, and making desserts without butter and sugar!

“In all my 22 years, I had eaten enough pineapple cakes and Dutch truffle pastries to last me a lifetime, but never tried a macaron. That very weekend, I went to a confectionery boutique store, and queued up for 15 minutes to get in. Inside, there were rows of macarons in exquisite colours displayed on tables and in the fridge. I ate one, and I was hooked,” says Dhingra. Even as the concoction of meringue and almonds was melting in her mouth, she knew what she wanted to do for a living: Bring the French confectionery to India.” – Forbes India.

Belonging to a family of food-enthusiasts, Pooja Dhingra was always very interested in baking and whipping up delicious treats in the kitchen. Her skills took the tranformation from amateur to professional when she decided to go and study hospitality instead of law, as she mentions in an interview with Rediff. Her family, too, was extremely supportive of her decisions, and she went off to Le Cordon Bleu in Paris to study baking and even when she finally decided to open her own business.

On the weekly #WomenOnTheMove Twitter chat by Women’s Web, Pooja came on board as a special guest, talking about the myth that healthy is rarely delicious and her new cookbook The Wholesome Kitchen: Recipes to Nourish, Energize and Indulge Your Soul where she has tried to remove the mutual exclusivity of the two concepts.

On her motivations for writing the book, she says:

I decided to start training for the marathon in 2015! I couldn't eat sugar and decided to make treats for myself that were healthy 🙂 https://t.co/dXdn63uwWW

Another important reason for her to write about her work is her desire to create recipes using ingredients that are easily available locally.

She then answered questions from Twitterati about food, her new cookbook, and her favourite recipes.

I think for the books it's been about writing easy recipes with simple ingredients that most people can find locally.

Pooja Dhingra then she dropped this gem of an information! Sugar free desserts!

No processed sugar! I've used the sweetness for dates, figs, apples and other fruits 🙂

Talk about doing the impossible, baking without the quintessential ingredients!

Just experimenting with different ingredients! For a baker to bake without butter, sugar, flour and eggs was such a challenge!

Many readers shared their views on the healthy Vs. delicious notion, and the guilt women feel after indulging themselves to tasty food.

I think we are more vocal about it then men. #WomenOnTheMove

3. women suffer because society dictates what is perfection in terms of body shape & size. We struggle to attain that goal. #WomenontheMove

Being an entrepreneur, a full time baker as well as an author, Pooja shares how she manages all the things she does. Wrapping up, she has certainly left me curious enough to go buy a copy of Wholesome Kitchen and bake!

Can’t Give Up Chocolates On A Vegan Diet? Pooja Mandal Is Your Saviour!