Is Demonetisation A wake-up Call For Women That Cash Cannot Be Trusted?

While homemakers' plight after demonetisation has been highlighted, does it also point to the need for at least educated women to start moving away from cash and into investments? While homemakers’ plight after demonetisation has been highlighted, does it also point to the need for at least educated women to start moving away from cash and into investments?

As India continues its fight against corruption, terrorism, and embarks on a path to development, the demonetisation move has caused much joy as well as heartburn across segments of society. As India Inc and the salaried middle class who have paid their taxes for years, hail this move, the poor, the traders and the ones who have depended on cash are wringing their hands in misery as businesses have been hit in a now literally, cash-strapped economy.

While certain segments of society have obviously been hit, there is a huge distressed segment that has been largely ignored: that of homemakers in India.

Stories have come to light of many homemakers stashing away cash for emergencies and for their own needs, away from the prying eyes of husbands and in-laws. While the media has been decrying the move for these housewives who have had to declare their stash to their husbands and families, what many fail to appreciate is that now these very same homemakers will be forced to think of means to put this same money into the bank. Not only will their money be secure in the bank, but more importantly, the money will grow with inflation.

Let me give you an example. According to an inflation calculator, what cost Rs.100 in 2000 now costs Rs 281 in 2016. Had the person deposited the Rs 100 in an FD giving 8% interest, this money would have become Rs 330 and thus increasing with the inflation and also giving a cushion and savings.  Now imagine millions of homemakers actually investing this money in banks. What surprises me further is that these women, who have been so prudent about money, haggled their way to savings worth several thousands and lakhs, and managed the family finances for years with thrift, have failed to realize that their hard work in accumulating wealth is actually counter intuitive to their purpose of saving up when they might as well spend all that money which after all won’t amount to much after a few years. Or they now finally wake up and invest the money so they are not left high and dry after years of frugal living.

Why many women don’t invest

While women are great at managing the money we have, we are not the best at investing this money. Looking around, and hearing the thoughts of even women in an urban set up, there are good reasons for this –

I am actually surprised that banks, Asset management companies and new start-ups haven’t started targeting this extremely lucrative segment yet to buy their financial products. While there is a whole world of complex equity and debt products out there, wouldn’t it be a simple matter to design a few low-risk products that women could trust, and that would be a dependable liquid fall-back during times of distress and provide them some security against inflation? In fact women also need this security so that their own families cannot touch that stash without their consent.

In the meanwhile, while the government trundles on with its agenda of a cashless or at least, a less-cash economy, it is time women rolled up their sleeves and spent some time on finding out what they should do with their money. What should they look at?

All in all, I believe that the demonetization move is a great wake-up call for men and women alike to manage their finances better. As the nation copes up with the woes of being cash strapped in the short-term, I hope, pray and wish that the outcome of this move is indeed positive – as only time will tell. 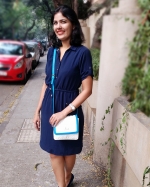 A wanderer, bibliophile, blogger, fitness enthusiast, Mom to a 3 year old and a Mumbaikar. read more...