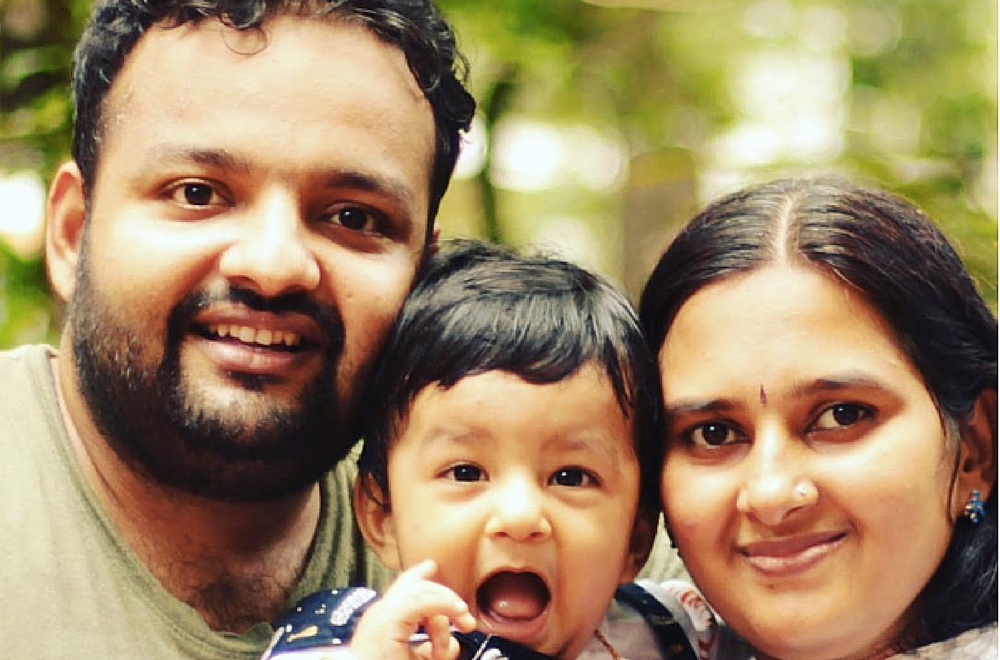 Manu Srikumar, the Founder of Denture Capital, talks candidly about balancing new fatherhood with a new venture, in this Father’s Day Special.

I first met Manu Srikumar years ago, when he was on the marketing team of a tech company that I was consulting with. Since then, we have connected over the years as both of us got caught up in ‘start-up fever’.

After working with a few start-ups, Manu is today himself the Founder of one! At Denture Capital, he is building an interesting video series that he calls “brain tonic for upstarts”. Alongside, Manu is also a new dad learning the ropes of fatherhood with a 1-year-old son.

When I requested him to be part of our Father’s Day Special series of interviews with dads, he admitted (very humbly!) that he has been having a tough time balancing fatherhood with a new venture, and that I should feature his story only if felt he was “worthy”.

I was all the more intrigued because this is a fairly common reaction for new moms trying to ‘have it all’, but not so much for dads for whom our society usually has fairly low expectations! (Of course, I decided his story was worthy enough.)

Manu says that he and his wife were overjoyed about becoming parents right from the time they came to know of the pregnancy. As a dad looking forward to this child, he was overjoyed on seeing his son, but found it tough to reconcile his anxiety about his wife’s condition. He says, “I was very concerned about my wife who spent more than 12 hours in labour. Only when she came out of labour really tired and the three of us were together did the feeling sink in. We looked at each other and she gave a very tired, but contented smile.”

As a digital native, he promptly created a Facebook post announcing the arrival of his son that said, ‘I am Daddy Cool! It’s a baby boy.’

A year on, he still feels fairly new to the parenting gig, but does think he is probably more hands-on than his dad was. While he does his best to be hands-on, his son and wife stayed with his in-laws for 3 months, and he would travel to meet them every alternate weekend. While they moved back once the baby was 3 months old, they have again shifted to his in-laws place for a short time, since he has started his own venture and needed some time to get it up and running.

Despite this situation, whenever he does visit them, Manu says that he tries his best to be completely involved. He adds, “I put him to sleep, I bathe him, change diapers, etc. Arguably, I am his second best friend after my wife. He is definitely more attached to her. He uttered the word ‘Dad’ very early.

Running a startup is very taxing and my wife decided to give me 1 year to experiment. I travel every alternate weekend to be with them and definitely, I wish they’d be here with me. I see a tear roll down my wife’s face when I leave on Sunday late evening. I am sure my son also misses me as much as I miss him.”

He also tries his best to bond with his son using technology and tools like Whatsapp, and stays constantly updated with pictures and videos. He jokes, “My son utters sounds that I don’t understand, but when I sing his favorite rhyme, he is quiet and listening. I think he knows it’s me on the line!” While he feels that at the moment, his son is definitely more attached to his mother, he definitely sees a larger role for himself soon. Manu also agrees that parenting is no longer solely mom’s domain – he sees fathers around him today discussing parenting a lot more often, whether it is the minutiae of kids’ lives such as sports and toys, or important decisions such as the choice of school.

Manu discloses that his wife and son are joining him next month, and that he cannot wait to see them back.

It is a pleasure indeed listening to dads like Manu, part of a new tribe of young dads, who take fatherhood very seriously beyond the breadwinner role and are proud to be doing everything from dishes to diapers. As the idea of what it means to be dad changes from one generation to the other, Indian men are surely in for some interesting times!