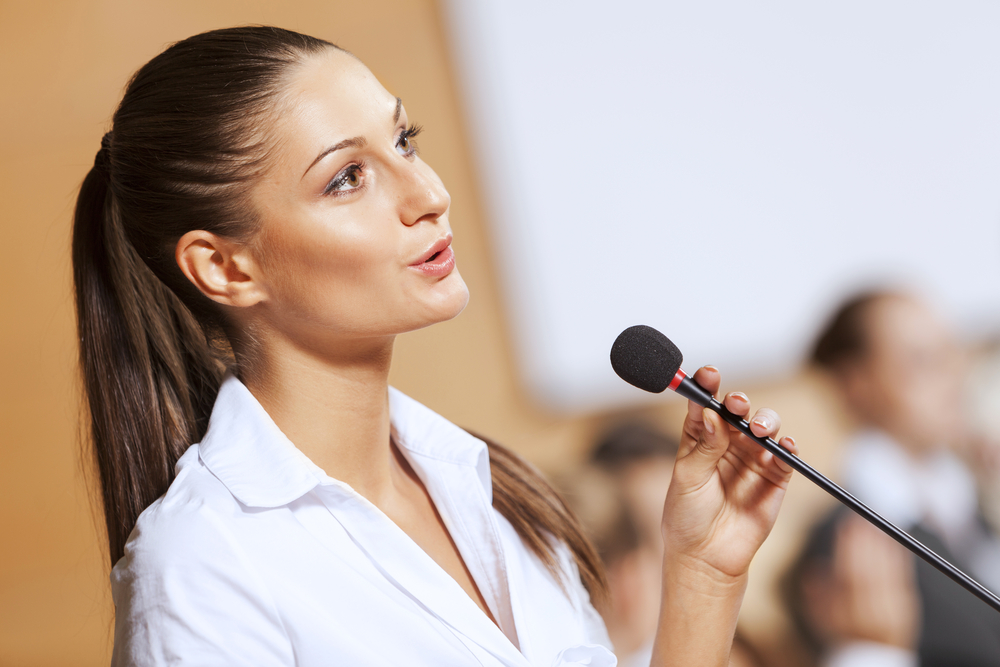 From life in a small town to a celebrity stand up comedienne – Mridul had certainly come a long way! May 2016 Muse of the Month winner.

“Doubling that peaceful sense of contentment was the beaming pride she saw shining in her parents’ eyes.” — Kavita Kane, Sita’s Sister

The second winning entry is by Deepa Arun.

An Interview With Mridul.

Author’s note: It’s an imaginative interview with a comedienne, a fictional character called Mridul. Mridul rose from odds to become a successful comedienne who now hosts her own show.

I was waiting with bated breath to see, talk and interview the most vociferous lady in the television industry, Mridul. Curious like a child, tensed like a teenager and mellowed like an elderly person (it’s funny to envisage different emotions in one mind and body at the same time); here I was at her studio.

Mridul was airing her famous talk show “Mridul Talks”. As I waited, a crew from the show requested me to be an audience in the talk show. I considered this offer as a bonus to observe her personality more minutely. I was ushered in to witness many women in the audience. The stage was well set with iconic Mridul in an elaborate designer saree, moving from one corner to the other.

Mridul, a small town girl came to Mumbai with dreams of becoming an actress. After a few opportunities, she found a calling to become a comedienne – a stand up comedienne. It was a time when stand-up comedy was performed by men. Mridul changed the scene by jumping into the bandwagon with ease and precision. Satire and sarcasm was her way of thinking. She voiced her opinion through satire which the audience and viewers engulfed with acceptance.

Today, her show was about ‘harassment of women in public transport’. There were many enthusiastic college girls who chipped in with their problems and solutions. Mridul encouraged these youngsters to be noisy about any harrasment, because only if there is noise, the society will listen. There were cheers, jeers, applause and laughter. I too felt like a free bird under the enigmatic Mridul. After the show, I met her at the green room. She had the most gracious smile which smoothened my tangled nerves.

Here is an excerpt of the interview.

Me: Mridul, how do you feel being termed as the voice of normal woman?

Mridul: I feel great. But I should say that woman should become their own voice. No one can represent the voice of another. If there is a problem, the person facing it should speak it out. There is no point in being silent or dormant about any matter.

Me: It is said that we should practice what we preach. Do you follow the rule? Do you voice out against any issue?

Mridul: I voice out every time (laughing).

Me: Can you elaborate on the issues you have fought for?

Mridul: Through my talk show, we had aired lack of sanitation facilities in villages. The show triggered a lot of opinions. Many women oriented organizations and newspapers came forward with news and reports. I was also told that women travelers used to shy away from road travels due to lack of clean bathrooms. Due to collective efforts, now, there are paid bathrooms on highways.

I pick various topics revolving around women and children and show it in my show. I feel that it is my way of giving back to the society.

Me: Does that mean you are against men?

Mridul: (laughing aloud) I am definitely not against men. I have many good friends who are men. But when I see a tormented woman, I go all out of my way to help her.

Me: There are allegations that you are boisterous in commenting on other well-to-do women. A recent report about slamming a leading actress regarding her weight was not taken well by her fans. You were trolled on social media.

Mridul: I call a spade a spade. I cannot stand hypocrisy. When I saw favoritism coined by newspapers on a particular actress, I spoke my mind…the truth.

Me: Perceptions differ from person to person. The actress looks good to her fans.

Me: How did you venture into comedy? Did you have an intuition that you would be a stand-up comedienne?

Mridul: Mine is a family of farmers. We come from a remote village in Andhra. As a child I witnessed hardship of my parents. I saw irony in every walk of life. Maybe the reality of life had seeped into my blood as a youngster. I also found that mulling over one’s situation was not a solution. I started seeing humor even in tragedy. I turned the table all together. I used to perform in my village during festivals. The satirist approach struck people hard. Satire combined with humor made a deadly potion. Slowly, I gained fame. I got my big break when I was asked to co-host with Ketan Sharma, the well-known comedy artiste.

I knew I had some talent with words. I cannot say whether it was an intuition or premonition, but stage was my home. I feel very comfortable on stage.

Me: There were struggling days for Mridul. Can you give the readers a peek into your past?

Mridul: Of course. I came to Mumbai with dreams of becoming an actress. I went for auditions but was rejected due to my personality. They said that I had a small frame and was not an ‘actress package’. Though I ended up in small commercials, I did not make it in movies. I failed a number of times. I was heartbroken and used to go to my village after each failure.

At my village too, girls of my age were getting married or settling in life. My parents were asked a number of questions about the delay in my marriage. It was a choking situation. I had to leave my village as I was now a scorned woman – single, poor and vulnerable. I gave a last shot. I decided to travel back to Mumbai. Thankfully, there was an audition for Ketan Sharma’s show. I despised all my fears and told my own story in complete sarcasm. That paved my way to the comedy world.

Me: How different are you from other comedians?

Mridul: The comedy world was filled with men. Their muse were women, their pshychology and anatomy. I started cracking jokes on men. I started pointing fingers at society monitored by men. When a school of fish swim in the same direction, people just notice the school. When a fish swims in the opposite direction, people notice the tiny fish. That was the way I was different from others.

Me: You have changed physically. There are gossips about your frequent visits to the cosmetic surgeons. Is it true?

Mridul: I am in a show business. I feel that this business runs on physical attributes. Now, I have money and contacts. Everyone loves to be admired for beauty and brains. I have brains. I just enhanced my beauty…surgically.

Me: You worked with Ketan Sharma for a decade. How did you part ways?

Mridul: I always consider Ketan to be my mentor and godfather. He helped and molded me into a seasoned comedienne. I was very loyal to him. When I got an opportunity to work for a rival channel, to host my own show, I diligently accepted it. That caused a rift in our relationship. If a man would have done the same act as I did, things would have been different. But, I being a woman, took my decision. This might not have gone well with him. I tried to talk to him, explain my situation. He didn’t give me a chance. I had offered an olive branch, although it was returned.

Me: What is your relationship status today?

Mridul: I am happy to have my own space. I have looked after my parents well. They live with me. I have found a soulmate and maybe next Dussehra, we will get married.

Me: Let’s have a rapid fire question round.

Me: If you were a man, what is the most important character you see in a woman?

Me: What invention relieved a woman from hard work?

Me: What is the eligible age to marry?

Mridul: Marry when you are financially sound.

Me: Who is the greatest comedian?

Me: Who is the greatest comedienne?

Me: What is your favorite quote?

Mridul: “Everyone has a bad day; not a bad life”.

Me: Who are friends?

Mridul: Those who guard your secrets and are honest.

Me: A piece of advice for upcoming comedienne…

Me: Explain Mridul in one word.

Just then there was a knock at the door. It was Mridul’s father. She welcomed her father and I got an opportunity to click some cute pictures of daughter and father. I could see a shimmer in his eyes. The emotions were mutual between them. Doubling that peaceful sense of contentment was the beaming pride she saw in his eyes. My camera was on a roll.

After the photo shoot, I thanked Mridul for a wonderful rendezvous. She wished me well and took leave from the interview. I too was happy as my debut interview was a success without any glitches.

Muse Of The Month May 2016: Inspiration From Kavita Kane

Kunti – Confessions Of A Woman. January 2016 Muse Of The Month Winning Entry By Deepa Arun