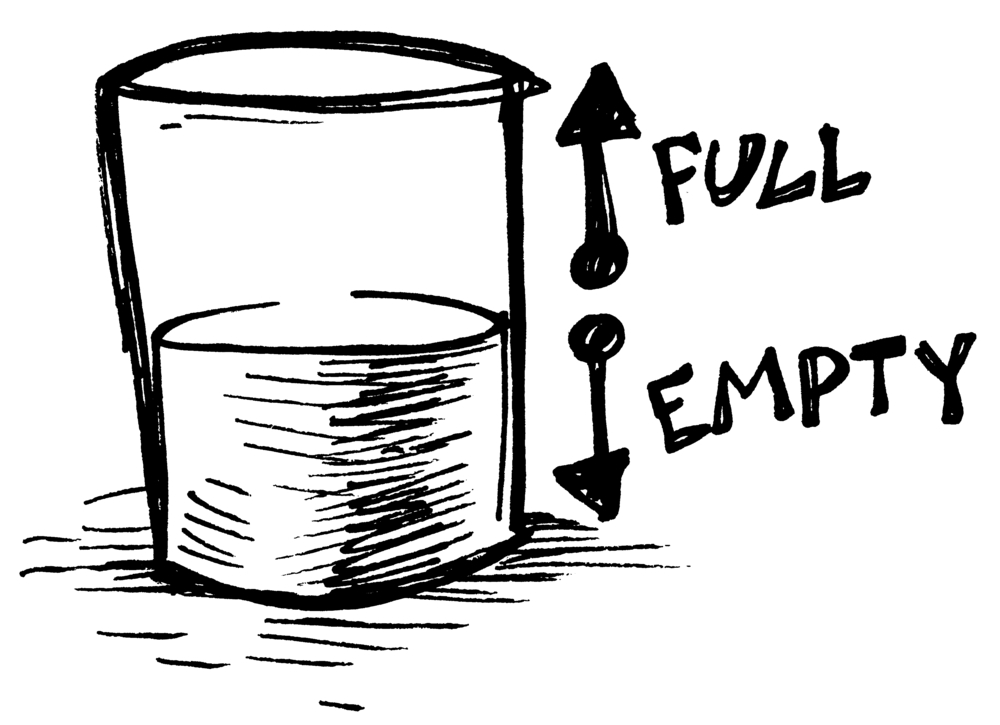 Perception, Or The Magic Of The Half Full Glass

How do you look at things – do you say the glass if half full, or half empty? A thoughtful post on the powers of perception.

One ordinary morning, I was preparing for work, I was just about done packing up our lunches, when my son called upon me to make an unusual declaration. He was standing in front of our bedroom window, the one that faces the backyard; curtain sideways and blind raised. As I entered, he turned towards me looking self-assured and accomplished as ever. “Momi, do you know our backyard is the best backyard ever? It’s the best in the whole wide world”, he declared.

As much as I try practicing positive parenting, I just couldn’t agree with him on this. I felt a need to show him the reality, so I immediately and utterly disagreed. “No darling. I don’t think so. Look at it, it’s messy, dirty and there are more weeds than plants. How can it be the best yard?” I asked. But he was adamant about his declaration. He didn’t stop, but started elaborating so I could understand. “Look at, momi, look at. It’s so beautiful”, he continued to describe different aspects of the yard excitedly pointing at them with his cute little index finger.

He didn’t seem to notice the dried grass, overgrown trees, rotten seed drops, scattered mulch or the ugliness created by the weeds. “We have so many big trees momi. They are so big and it’s so nice that little birdies and little squirrels can live there. We have so many animals living in our garden!” his voice started getting louder with excitement. “We have so many different kind of plants all over and did you notice the yellow flowers? There are millions of them! They are beautiful right momi?”

Of course he was referring to the dandelions I despise so much and the different plants that he pointed out were all weeds. He also didn’t think negatively about the seed drops that our overgrown trees produce and are squashed and scattered everywhere, most of them rotten, adding extra layer of mess to an already dirty yard. To him they were simply bird foods that help squirrels and birds in our yard survive.

“Did you notice bird poop on the table momi?” He erupted out in laughter. “Look at, there is some on the chairs too!” “That isn’t funny to me darling,” I quietly thought. The ugliness of the yard didn’t bother him at all, neither did the lack of maintenance nor abundance of neglect. It was his backyard, he thought it was the best, and that’s where his evaluation ended.

Now I couldn’t simply disagree with him anymore. I was taken quite aback. It made me smile. It made me think. Never before did it occur to me that our backyard could have any purpose other than to serve us aesthetically at which, in my opinion, it has always failed miserably. So to hear such an appreciation for a yard that only generates a negative emotion in me was thought provoking.

How differently we thought! How differently we saw! I looked outside and I saw ugliness and sadness – a miserable yard crying for help. But here this four year old of mine was seeing beauty in the same things I saw misery in. For every negative aspect of it he had an interesting positive interpretation. Every part that generated a negative thought in me did the complete opposite to him. It amazed me.

Reality is nothing but a mere reflection of perception. And I wondered how, many a times we get stuck in the cycle of negativity simply because we fail to change our perception towards a situation that’s keeping us in there.

And then, it hit me, I felt enlightened. Reality is nothing but a mere reflection of perception. And I wondered how, many a times we get stuck in the cycle of negativity simply because we fail to change our perception towards a situation that’s keeping us in there. Every situation, every event, every experience that happen to us have many different angles of viewing them. It’s up to us which angle we choose and this choice is what makes us either feel good or bad about it. My son chose to look at our backyard from a child’s inherent optimism and I as a grown woman looked at it for what it is. It is a sad backyard, there is no denying to that. However, my son’s perception brought him joy and mine brought me gloom and we were both looking at the same reality.

Image source: glass if half empty, half full by Shutterstock.