In Conversation With The Inimitable Radhika Vaz

A conversation with the inimitable Radhika Vaz, who talks about her stand-up comedy, misogyny she faces, body image, menstruation and much more. 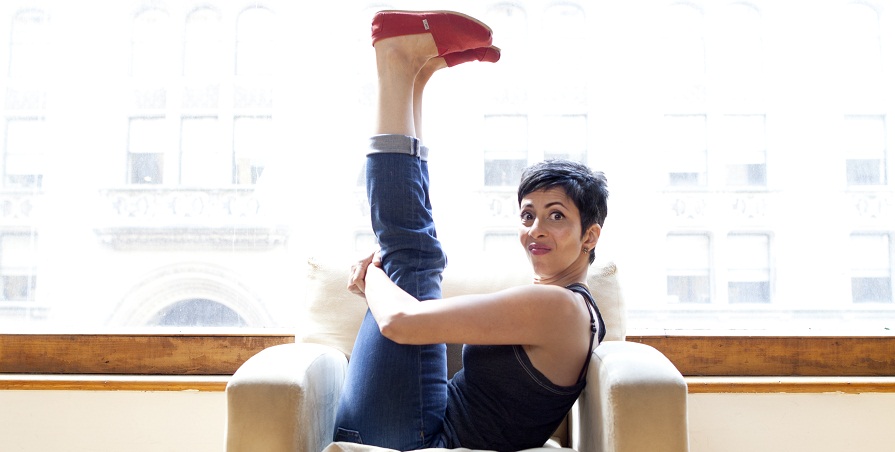 A conversation with the inimitable Radhika Vaz, who talks about her stand-up comedy, misogyny she faces, body image, menstruation and much more.

Radhika Vaz is best known for her no-holds barred stand up comedy. Scroll down to learn more about her take on taking risks, loud women in the audience as well as nudity.

Could you tell us a little bit about your childhood and early career?

Radhika Vaz: My dad was in the Air Force and I moved around quite a bit in my early years although it slowed down later. I went to boarding school and then I went away to college so I wasn’t home much. My childhood was fine. I wasn’t beaten although I probably should I have been! Then I started working in advertising and was there for a really long time and thought I would be in it forever before moving to comedy.

In one of your interviews, you called your move to comedy an accidental stumble. Did anything surprise you in the transition?

Radhika Vaz: I always believe that anything you think is going to happen, is not going to happen. People like to say you need to say your dreams aloud and they will come true. Something will happen but it will not be what you said it will be. It will be very different! I always wanted to be an actor. I wanted to do dramatic acting. I had no reason for this other than it seemed amazing to me. I never thought that I will actually do any kind of performances. In India, it was all Bollywood and I knew at an early age that was not going to be my path. I started doing improv to be able to act. But then I moved towards comedy and started performing in shows. Even then I didn’t call myself a comedian for years. I was making some business cards and was thinking of what to call myself. A friend told me to use comedian and I was like no, I am a performer. That’s a low-risk term and no one expects you to make them laugh.

Are you a risk taker?

Radhika Vaz: I am totally risk-averse. However, improv as a practice or performance tool involves taking a total risk. I have to take a chance with what the audience will think about what I am saying. That has made me more confident of my ability to create something. That is a fear most creative people have – what if I have nothing else left to say, what if this is it, this is the best I can do? I remember that feeling from my first show. But improv has had me believe you can create stuff from nothing. I have had many deadlines where I go like oh my god it is tomorrow! I still haven’t written that effing thing! How will it happen?! But it does. Always.

Did you make any changes to the content of your shows when you started performing in India?

Radhika Vaz: I never planned to live anywhere. Even with New York, I never thought I would live there as long as I did. I also never thought I would come back until very recently. When I performed in New York, I always knew I wanted to perform in India. My shows aren’t different. What is different is the audience. New Yorkers are more jaded – they have seen and heard it all. In India though I find it is all about perspective, it’s not what you say but  who is saying it. If a woman is saying it sometimes its a little more shocking. Although in America, being an Indian woman of my age, occasionally means people aren’t expecting the things I say and that shocks them a little too.

What is the most vocal opposition you have faced?

Radhika Vaz: There was a guy who saw my show and decided he absolutely did not like it or approve of it. He  tried to get the organizers to shut it down in another location. He was an old guy and he showed up at the second venue months later, and lodged a complaint with the organizers. I remember thinking good god, don’t you have anything better to do?

How do you deal with the misogyny that you get thrown at you?

Radhika Vaz: Ya, I mean, they don’t even know they are misogynistic. They don’t even know how damaging they are for women. That concept is so ingrained. I do face it a lot, we all do. I definitely feel like being in the field that I am, it exists for sure. But I don’t always deal with hardcore, super old school misogyny. That is not part of my day to day life. But I have dealt with it. I typically get really upset and deal with it very poorly or I am very controlled. But I write a column for Times of India twice a month and that’s where I can take my poison out and write whatever I want. It is great fun and now so many younger people read it as well. For example, recently the Mumbai police went into hotel rooms and pulled out couples who weren’t married and harassed them, I wrote about how the slut shaming and scaring girls starts at home. Forget about incompetent police officers, we have incompetent parents!

In an earlier interview, you mentioned that women behave differently when by themselves and when with men. Could you speak some more to that?

Radhika Vaz: We all behave differently in front of the opposite sex. It is a small group of men and women who behave the same with each other because that is how we have been conditioned. When it comes to my comedy there is a certain amount of truth telling about the inconvenience of being female. It is not a flattering picture that I paint. There are a lot of women who come to my shows in big groups and they are so funny that sometimes I have to stop because I am laughing at them laughing. Couples are definitely quieter and the laughter gets more awkward. This is not to say that men aren’t loud, I’ve had super loud men as well.

I saw your FabAlley ad and I thought it was a very interesting take on body image. Would you consider nudity again for an ad?

Radhika Vaz: Totally, I am up for anything that pushes a positive body image. As for being naked, I would do anything to make things funnier and more stupid. I don’t really care!