My first Visit To A Mosque: Notes From Oman

This post on a first visit to a mosque describes a beautiful experience at one of the grandest mosques, the Sultan Qaboos Grand Mosque in Muscat, Oman. 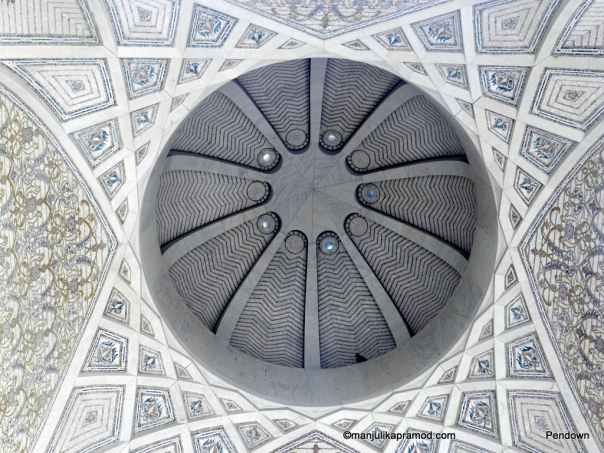 This post on a first visit to a mosque describes a beautiful experience at one of the grandest mosques, the Sultan Qaboos Grand Mosque in Muscat, Oman.

Since it was my first visit to a mosque, I was very excited. Of course, I consider myself blessed that I got a chance to start with the one that has many superlatives attached to it (largest, grandest, one of the biggest) – the Sultan Qaboos Grand Mosque in Muscat, Oman.

Even though, I was aware that entry into the mosque was allowed to only those whose arms and legs (till the feet) were covered, ignorantly, I ended up turning at its gates in a dress that reached just a little above my ankles; I thought it wouldn’t bother anyone. In addition, my arms were covered and I carried a scarf too to cover my head but I was stopped at the gate.

The religious guards at the iron gate suggested that I wasn’t appropriately dressed and I rent a burqa from one of the rooms in a corner. I realized my mistake soon – I should have worn a trouser or pants to cover the ankle portion too; even a little skin show is not allowed.

The three bloggers in the Mosque periphery L to R: Aseem, I and Mithun

Next, I paid 5 Omani Riyal (definitely expensive) to get clad in a Burka. (You can see above how I looked, covered from top to bottom)  The lady at the shop asked for my passport and let me choose the abaaya of my choice. She even helped me wrap my scarf in the niqaab way and it did not slip at all. I finally learnt the way of doing it which I had not been able to pick in my stay at Riyadh.

Since the mosque is open to non-muslims only between 8 to 11 a.m, I did not stay long to interact with the ladies and moved out of the shop to catch up with Aseem and Mithun, my blogger friends who were waiting for me. For all three of us, it was going to be a memorable experience – one that we had been excitedly looking forward to.

With five minarets and one central dome, this place of worship is an architectural masterpiece. As we walked in, its photogenic facade opened up its spectacular features. Our guide, Mazid too had enough to say about the opulence of the mosque that took six years to be completed. Named after the King of Oman, this place of worship wins hearts because of its gorgeous Swarovski crystal chandelier and an intricately woven Persian rug.

The lush green garden welcomed us the moment we crossed the Iron gates around the mosque grounds. Through the gardens we found our way into the central court. There is a small prayer room which meets you first before you walk ahead to discover the larger one. To reach the main prayer hall one has to pass through a maze of arches and halls. The corridors and courtyards are lavish and stand on sparkling white marble. There is a shoe-rack that awaits you once you finally enter the prayer room that houses one of the largest chandeliers and the Persian rug. 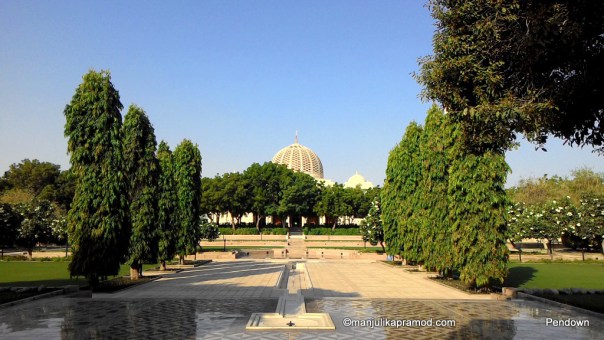 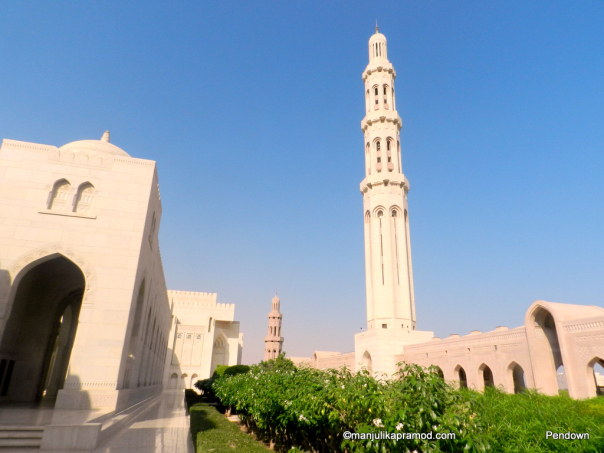 A closer shot of the beautiful Islamic architecture 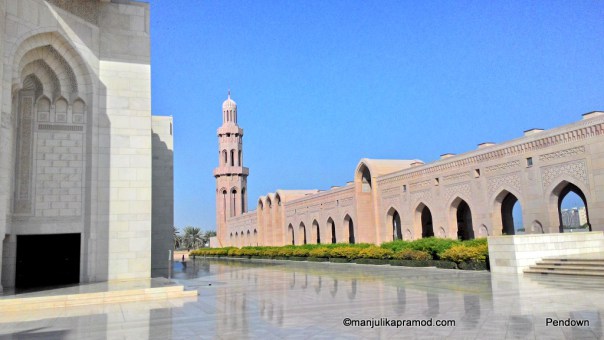 The sparkling marble flooring and one of the 5 minarets 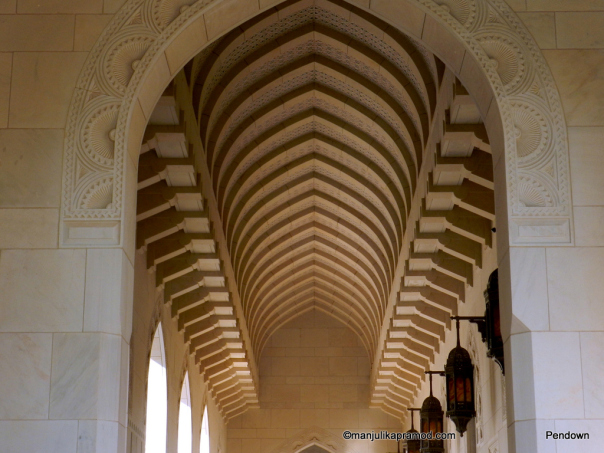 A maze of arches 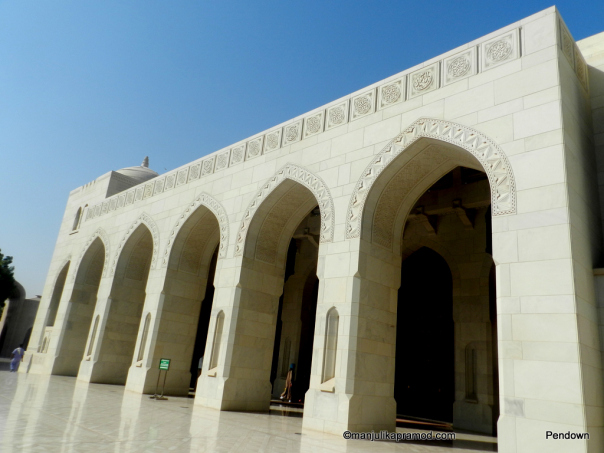 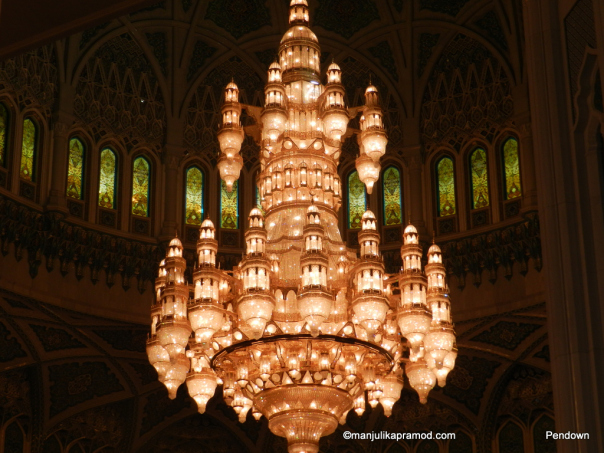 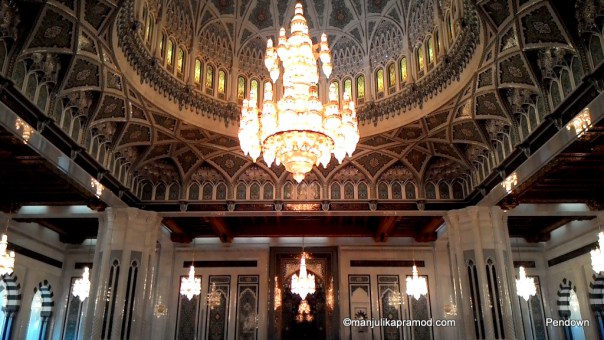 Inside the prayer hall 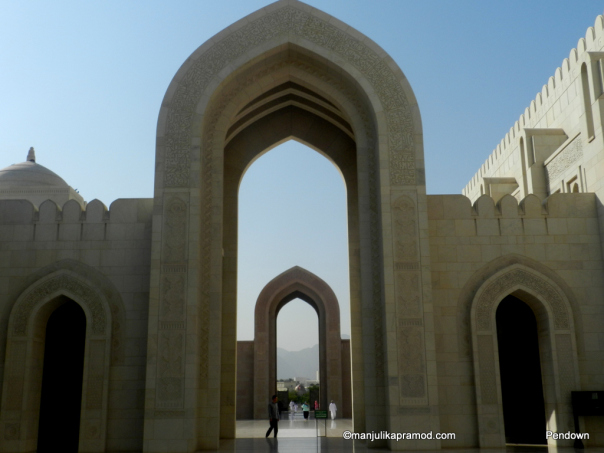 A symmetry of arches 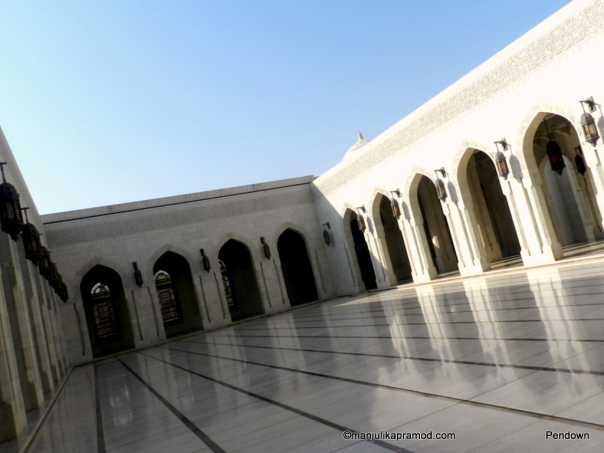 There are three doors to let you in. When I entered, to my eyes, it all felt absolutely wonderful. Inside, I marveled at the eight-ton Swarovski crystal chandelier that hangs from the central dome. It was so massive that I failed to cover it all in one frame.

The rug felt soothing to the feet. The Holy Quran was also placed there. I also noticed that the bluish shade of Persian rug changed as you walked away from one corner to another. It reflected amazing shades under the light of the chandeliers. The intricate designs on the walls and roof with lovely artistic styles all over the prayer room made me want to stay longer. I muttered a small prayer and thanked Allah for inviting me over to his abode. The beautifully tranquil prayer hall looked gorgeous in the company of chandeliers of all sizes. I stood mesmerized and absolutely loved my presence under the roof of this architectural masterpiece.

Outside the main prayer hall, I enjoyed walking around. One can’t help admiring everything about its cultural, historic, and architectural aspects.  Every nook and corner showcases beautiful mosaic motifs. The tile work is beautiful and it captures specific themes and styles from the Arab Islamic eras.

As one looks around, one notices that the arches, the symmetry, the design of the mosque truly flaunt elegance and simplicity. There isn’t anything gaudy or annoying about its design. Like every place of worship, it felt peaceful and secure. For me, it was a dwelling of God and I was here to take his blessing. I wondered that we all behaved so differently outside these places of worship! While every religion preached peace and brotherhood, what made us fight and why did we forget the teachings of God?

Truly, I loved the serenity and quietness of the mosque and its stunning interiors left me amazed. A visit to Muscat will be incomplete without a visit to the Grand Mosque. I am glad that unlike some other Mosques, this one is open to non-Muslims as well. This too promotes respect and tolerance for Islamic religion.

The mosque was a gift to the country by Sultan Qaboos to mark the 30th year of his reign.

It is located in the al-Ghubrah area, on the way as one moves from the Airport towards the city.

There is a strict dress code to follow before your enter. Hands and legs must be covered for both men and women. Women must carry a scarf to cover their head.

The five minarets of the mosque are associated with the five pillars of Islam.

In the Islamic Centre, some Arabic coffee and dates awaits everyone. Here you are welcomed by local people and this is the place where one can learn and ask about Islam.

Shoes are supposed to be removed before entering the prayer hall.

The Mosque closes to visitors or non-muslims at 11 am and it does not allow visitors on Friday.

Manjulika Pramod is a Telecom engineer, Author, Travel blogger and Hobby artist. She has written 'Kaleidoscope of Cheer and Hope.' After working for 8 years in the corporate industry, she gave up her regular job read more... 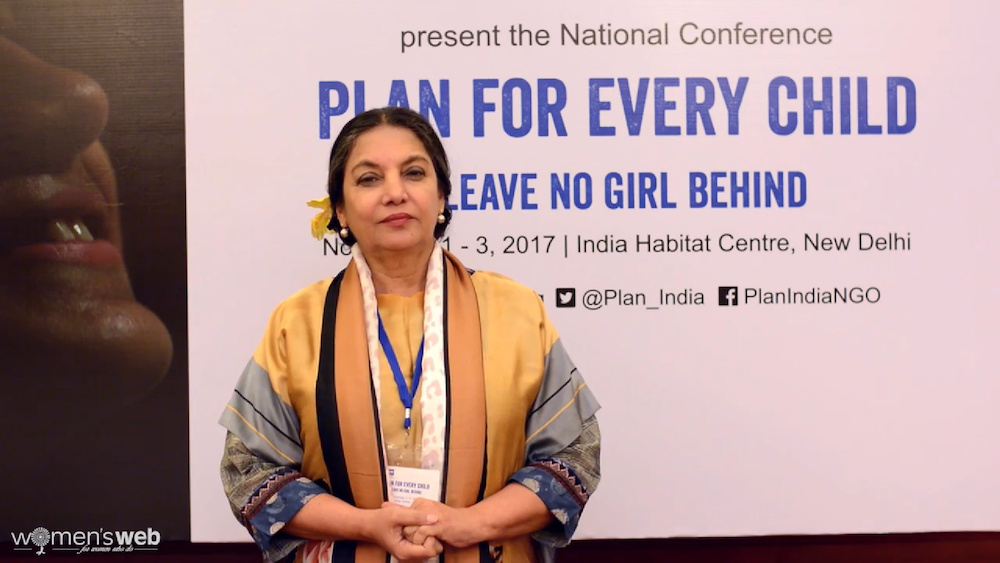 This November Let’s Pledge To Leave No Girl Behind 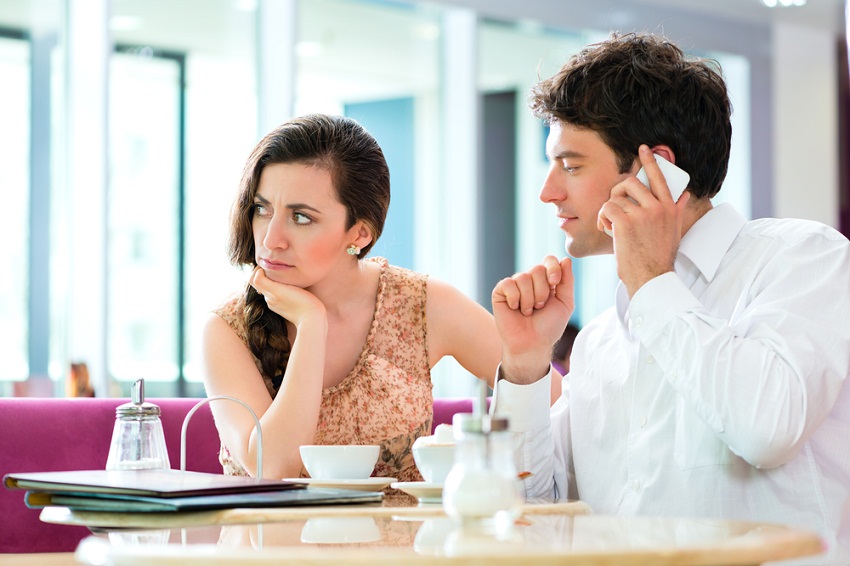 11 Lessons Being A Consultant's Wife Taught Me 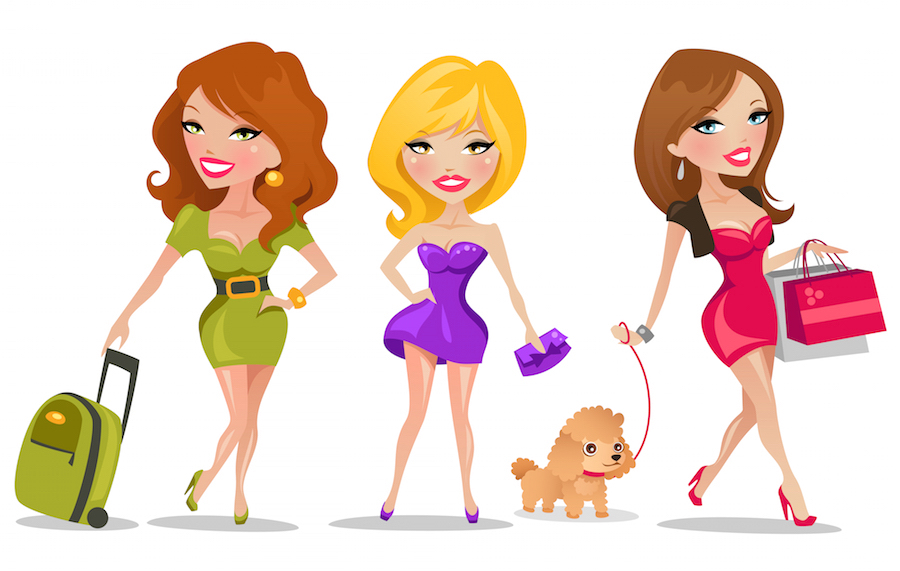 This Traveholic Loves Travelling in Groups. What's Your Take?