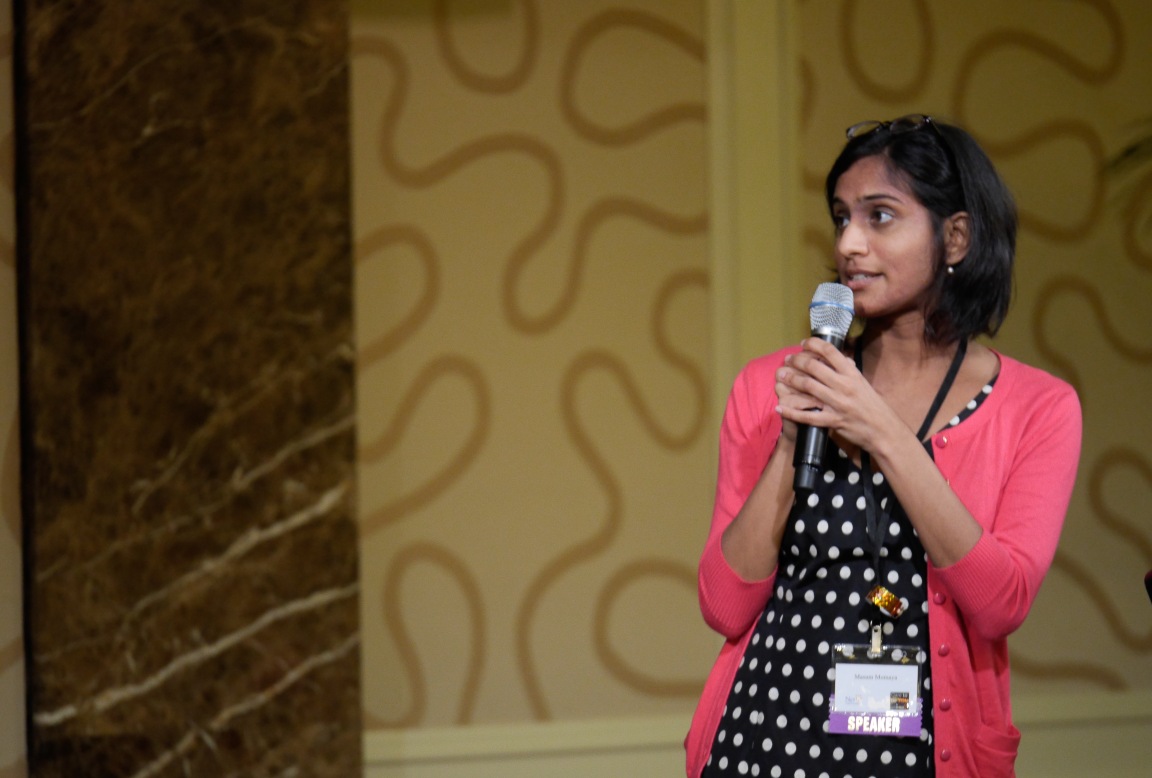 Masum Momaya: Curating The Many Stories Of Indians In America

In the popular imagination both in India and in the United States, immigrants from India are professionals such as doctors and engineers migrating in the last 15-20 years. Plus, in the ‘foreign’ imagination, Bollywood with its larger than life movies has come to represent an idea of India.

Many of us don’t know that people of Indian origin contributed to the building of America as a nation almost from its very beginning. In early 2014, an exhibition called Beyond Bollywood: Indian Americans Shape the Nation opened at the Smithsonian museum in Washington D.C, to share just how diverse Indian immigrants, and their experiences and contributions are.

When I heard that Dr. Masum Momaya, who organised that exhibition, was bringing a part of it to India, I grabbed the chance to meet and interview her in person. A Curator at the Smithsonian Institution, Dr. Momaya is a feminist, a researcher and an artist, who weaves her skills and interests into her work as a curator.

During October and November 2014, a small portion of the larger exhibition from Washington D.C was shown at venues in Chennai, Delhi, Kolkata and Goa. At Chennai, I also had the opportunity to listen to a very interesting talk by Dr. Momaya on Indian women in America, as artists, post which we talked about the diverse experiences of Indian immigrants in the US for over 100 years, and how the exhibition is taking those to a larger public.

Could you tell our readers about what drew you towards becoming a curator? You’ve studied Economics, Public Policy and Women’s Studies, and you are an activist. How does it all come together?

Dr. Masum Momaya: I’ve been a curator since 2007 and I actually fell into it, serendipitously! I’ve been an activist since my teens and worked with the Arts as a hobby and as an activist. And of course, through my studies, I’ve always been interested in Research. To me, being a curator was a really interesting way to bring those things together in one occupation, but as I said, it happened serendipitously!

I had finished my Ph.D and there was a job opening at the International Museum of Women and that’s where I first worked as a curator. They were looking for someone with my subject matter knowledge, and so, it turned out that I was able to bring the skills from my various life and professional experiences as well as my schooling together to do the work.

To me, curating is a form of activism. I know that some educators like being in the classroom and publishing papers in academic journals – I am inspired by creating tools for the general public and seeing things come alive in a physical space. I love the opportunity to work not only with text, but with the digital medium, with multi-media, works of art, historical objects…

…cultural work is an important part too; it’s what influences the general public – open’s people’s minds and touches their hearts in a way an argument may not.

It is both art and science, and I do see it as really political work – being in Advocacy, you try to change the law, you protest, you work on public policy – but I think cultural work is an important part too; it’s what influences the general public – open’s people’s minds and touches their hearts in a way an argument may not.

I think it’s really important that curators use the platform they have to touch on issues of contemporary relevance.

And what do you enjoy most about the work that you do?

Dr. Masum Momaya: I really love working in the visual medium, with photographs and works of art, trying to understand the different layers of meaning that are hidden within them. But I also like to visualise things in public spaces – to figure out how people are going to interact, what they’ll be drawn to, how to represent things in a way that is compelling, that’s provocative. For me it is really the bringing together of things that is the most exciting part of the work.

It’s fascinating to just sit in the gallery, incognito, and see what people are drawn to, what they talk about, what they point at…

Do you do that often?

Dr. Masum Momaya: I do – every once in a while. My schedule doesn’t permit me to do it very often, but once every couple of weeks, I’ll go and sit in the gallery for an hour – no one knows I’m the curator, so it’s interesting to observe what people are drawn to.

Coming specifically to the Beyond Bollywood exhibition, how do you think your being a woman and a feminist informed your work on this exhibition?

Dr. Masum Momaya: I would say in a couple of ways. One, there are women protagonists telling the story – I think that’s the most basic level of recreating history; making sure that in the narrative, women are centered as protagonists and not invisible or just rendered as side characters.

…making sure that in the narrative, women are centered as protagonists and not invisible or just rendered as side characters.

For me, feminism in addition to being about women is also about different ways of knowing and seeing. So the second is, as a feminist, I think that influenced my decision to include works of art in the telling of history. Most historical exhibitions have artefacts, documents, photographs, text – they don’t necessarily intersperse works of art, but for me, as a feminist, it was important to incorporate moments where the visitor is encountering knowledge and questions in a different way, through a different medium.

I would also say that feminism for me is about knowledge being co-created rather than there being an authority depositing information on the public. That influenced my curatorial process; it influenced the sources I consulted, from scholars, academics, universities, to taking oral histories, including people whose expertise would not be considered as ‘expertise’, young voices, marginalized voices…so the research itself was done in a way that I hope would be more inclusive than how research is usually done.

In the US, how do you see initiatives like this in the context of the ongoing debate about immigration, some of it very polarizing?

Dr. Masum Momaya: As curators, I feel we curate for the contemporary moment – it was very intentional given how polarizing the immigration debate is, to curate this as an American story. So, it is written as an American story for all Americans and not just for Indians. We are very intentionally trying to dismantle this notion of who is a foreigner and who is American and who belongs.

We are very intentionally trying to dismantle this notion of who is a foreigner and who is American and who belongs.

The reason we started with early history is to show how Indians have been a part of US history since its inception and so, this perception that we are foreigners is in fact, not true. If we look at the history of most communities in the US, that is also the case.

I’d like to say as a curator, we don’t hit people over the head with the information, but we provide the history and write it in such a way that they can link to things that they hear on the news or debates. 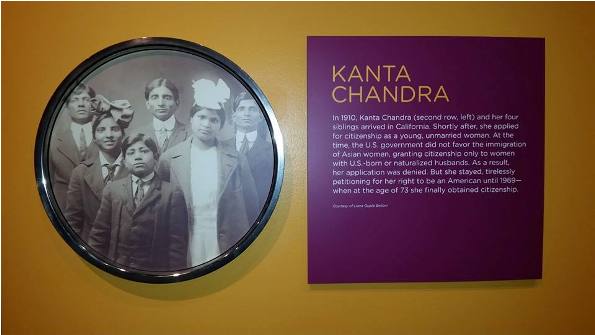 Kanta Chandra immigrated to the US in the early 1900s

One of the things you mentioned was the effort to centre women as protagonists. Do you have a personal favourite among the stories of women you chose for this exhibition?

Dr. Masum Momaya: Yeah, there is this one woman – she was an early immigrant, Kanta Chandra, who came to the US in 1905 with her four brothers and sisters.

She was very young, just 11 or 13 when she came here, and she wanted to stay and make a life. At that time, it was very difficult and pretty unusual for single, young women to immigrate to the US. There really was no mechanism for them to get citizenship. They either had to marry someone here which was really not social convention at that time or they had to come with a husband, but she persisted and she stayed.

She went on to get an education, and when voting rights and citizenship became available in the 1920s, she started to petition for herself. The problem was that Indians were not allowed to become citizens until 1946, so she was facing barriers on account of both her nationality and her gender, but she continued to do it and finally got a citizenship in her late 60s.

The problem was that Indians were not allowed to become citizens until 1946, so she was facing barriers on account of both her nationality and her gender, but she continued to do it and finally got a citizenship in her late 60s.

Her granddaughter shared her story as well as some of those early photographs. I think about how brave she was, at a time in history where not many people came to start with, and then not many people tried to build a life and stay, but she was someone who built a life, for many years as a single woman. She eventually put herself through school became a chiropractor and started her own practice.

There just weren’t many women who immigrated at that time, so her story is really unique and we’ve included her among the very first people we featured in the exhibition.

The Beyond Bollywood: Indian Americans Shape The Nation exhibit will be on at the Smithsonian National Museum of Natural History in Washington D.C until August 2015.

For those of us who cannot visit in person, there is a lovely digital exhibition on as well.

Dr. Priya Davidar: Life As A Woman Ecologist In India